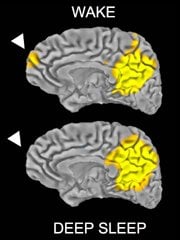 Due to depression, individuals with SAD, like those with insomnia, may spend more time resting in bed, but not actually sleeping, leading to misconceptions about how much they sleep. The neuroimaging scan shows brain activity during wakefulness and deep sleep. The image is credited to Silvina Horovitz, Ph.D., NINDS.
Home
Featured

A new study shows that SAD sufferers, like insomniacs, misreport sleep patterns due to depression.

Kathryn Roecklein, primary investigator and assistant professor in Pitt’s Department of Psychology within the Kenneth P. Dietrich School of Arts and Sciences, along with a team of researchers from Pitt’s School of Medicine and Reyerson University, investigated why, according to a previously published sleep study by the University of California, Berkeley, individuals with seasonal affective disorder incorrectly reported that they slept four more hours a night in the winter.

“We wondered if this misreporting was a result of depression symptoms like fatigue and low motivation, prompting people to spend more time in bed,” said Roecklein. “And people with seasonal affective disorder have depression approximately five months a year, most years. This puts a significant strain on a person’s work life and home life.”

Roecklein and her team interviewed 147 adults between the ages of 18 and 65 living in the Pittsburgh metropolitan area during the winters of 2011 and 2012. Data was collected through self-reported questionnaires and structured clinical interviews in which participants were asked such questions as: “In the past month, have you been sleeping more than usual?” and “How many hours, on average, have you been sleeping in the past month? How does that compare to your normal sleep duration during the summer?”

In order to understand participants’ ideas about sleep, Roecklein’s team asked them to respond to questions such as “I need at least 8 hours of sleep to function the next day” and “Insomnia is dangerous for health” on a scale from 0 to 7, where 7 means “strongly agree” and 0 means “disagree completely.”

“We predict that about 750,000 people in the Pittsburgh metro area suffer from seasonal affective disorder, making this an important issue for our community and the economic strength and vitality of our city,” said Roecklein. “If we can properly treat this disorder, we can significantly lower the number of sufferers in our city.”

Roecklein’s research data suggests that addressing, understanding, and managing these “unhelpful beliefs” about sleep by way of psychotherapy could lead to improved treatments for seasonal affective disorder. One of the most effective treatment options for insomnia, said Roecklein, is cognitive behavioral therapy for insomnia (known as CBT-I), which aims to help people take control of their thinking to improve their sleep habits as well as mood, behavior, and emotions.

Loneliness Has a Different Neural Basis Than Social Anxiety

Notes about this neuropsychology and SAD research

Their paper, “The Role of Beliefs and Attitudes About Sleep in Seasonal and Nonseasonal Mood Disorder, and Nondepressed Controls” was originally published online May 23 in the Journal of Affective Disorders. This work was partially supported by a National Institutes of Health grant.