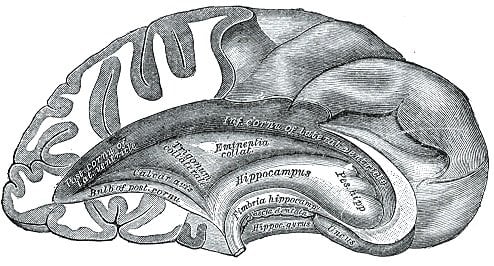 When the hippocampus, a key area associated with learning and memory formation, is disabled, the prefrontal cortex takes over. This demonstration of neuroplasticity could potentially help researchers to develop new treatments for stroke, Alzheimer's disease and other conditions associated with damage to the brain. The image shows the hippocampus location in the brain.
Home
Featured

Brain Rewires Itself After Damage or Injury

When the brain’s primary “learning center” is damaged, complex new neural circuits arise to compensate for the lost function, say life scientists from UCLA and Australia who have pinpointed the regions of the brain involved in creating those alternate pathways — often far from the damaged site.

The research, conducted by UCLA’s Michael Fanselow and Moriel Zelikowsky in collaboration with Bryce Vissel, a group leader of the neuroscience research program at Sydney’s Garvan Institute of Medical Research, appears this week in the early online edition of the journal Proceedings of the National Academy of Sciences.

The researchers found that parts of the prefrontal cortex take over when the hippocampus, the brain’s key center of learning and memory formation, is disabled. Their breakthrough discovery, the first demonstration of such neural-circuit plasticity, could potentially help scientists develop new treatments for Alzheimer’s disease, stroke and other conditions involving damage to the brain.

For the study, Fanselow and Zelikowsky conducted laboratory experiments with rats showing that the rodents were able to learn new tasks even after damage to the hippocampus. While the rats needed more training than they would have normally, they nonetheless learned from their experiences — a surprising finding.

“I expect that the brain probably has to be trained through experience,” said Fanselow, a professor of psychology and member of the UCLA Brain Research Institute, who was the study’s senior author. “In this case, we gave animals a problem to solve.”

After discovering the rats could, in fact, learn to solve problems, Zelikowsky, a graduate student in Fanselow’s laboratory, traveled to Australia, where she worked with Vissel to analyze the anatomy of the changes that had taken place in the rats’ brains. Their analysis identified significant functional changes in two specific regions of the prefrontal cortex.

“Interestingly, previous studies had shown that these prefrontal cortex regions also light up in the brains of Alzheimer’s patients, suggesting that similar compensatory circuits develop in people,” Vissel said. “While it’s probable that the brains of Alzheimer’s sufferers are already compensating for damage, this discovery has significant potential for extending that compensation and improving the lives of many.”

The hippocampus, a seahorse-shaped structure where memories are formed in the brain, plays critical roles in processing, storing and recalling information. The hippocampus is highly susceptible to damage through stroke or lack of oxygen and is critically inolved in Alzheimer’s disease, Fanselow said.

“Until now, we’ve been trying to figure out how to stimulate repair within the hippocampus,” he said. “Now we can see other structures stepping in and whole new brain circuits coming into being.”

“If we’re going to harness this kind of plasticity to help stroke victims or people with Alzheimer’s,” she said, “we first have to understand exactly how to differentially enhance and silence function, either behaviorally or pharmacologically. It’s clearly important not to enhance all areas. The brain works by silencing and activating different populations of neurons. To form memories, you have to filter out what’s important and what’s not.”

Complex behavior always involves multiple parts of the brain communicating with one another, with one region’s message affecting how another region will respond, Fanselow noted. These molecular changes produce our memories, feelings and actions.

“The brain is heavily interconnected — you can get from any neuron in the brain to any other neuron via about six synaptic connections,” he said. “So there are many alternate pathways the brain can use, but it normally doesn’t use them unless it’s forced to. Once we understand how the brain makes these decisions, then we’re in a position to encourage pathways to take over when they need to, especially in the case of brain damage.

“Behavior creates molecular changes in the brain; if we know the molecular changes we want to bring about, then we can try to facilitate those changes to occur through behavior and drug therapy,” he added. I think that’s the best alternative we have. Future treatments are not going to be all behavioral or all pharmacological, but a combination of both.”

Notes about this neuroplasticity and neurology research