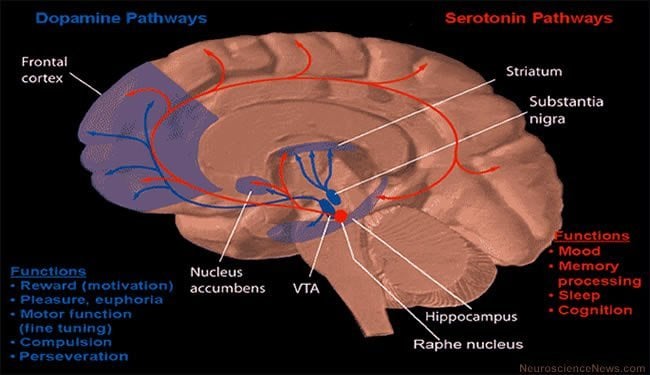 The cocaine vaccine combines bits of the common cold virus with particles that mimics the structure of cocaine. When injected into the test subject, the body notices the cold virus and mounts an immune response against both the virus and cocaine impersonator which is hooked to it. The image shows the dopamine pathway in the brain which cocaine affects.
Home
Featured

Their study, published online by the journal Neuropsychopharmacology, used a radiological technique to demonstrate that the anti-cocaine vaccine prevented the drug from reaching the brain and producing a dopamine-induced high.

“The vaccine eats up the cocaine in the blood like a little Pac-man before it can reach the brain,” says the study’s lead investigator, Dr. Ronald G. Crystal, chairman of the Department of Genetic Medicine at Weill Cornell Medical College.

“We believe this strategy is a win-win for those individuals, among the estimated 1.4 million cocaine users in the United States, who are committed to breaking their addiction to the drug,” he says. “Even if a person who receives the anti-cocaine vaccine falls off the wagon, cocaine will have no effect.”

Dr. Crystal says he expects to begin human testing of the anti-cocaine vaccine within a year.

Cocaine, a tiny molecule drug, works to produce feelings of pleasure because it blocks the recycling of dopamine — the so-called “pleasure” neurotransmitter — in two areas of the brain, the putamen in the forebrain and the caudate nucleus in the brain’s center. When dopamine accumulates at the nerve endings, “you get this massive flooding of dopamine and that is the feel good part of the cocaine high,” says Dr. Crystal.

The novel vaccine Dr. Crystal and his colleagues developed combines bits of the common cold virus with a particle that mimics the structure of cocaine. When the vaccine is injected into an animal, its body “sees” the cold virus and mounts an immune response against both the virus and the cocaine impersonator that is hooked to it. “The immune system learns to see cocaine as an intruder,” says Dr. Crystal. “Once immune cells are educated to regard cocaine as the enemy, it produces antibodies, from that moment on, against cocaine the moment the drug enters the body.”

In their first study in animals, the researchers injected billions of their viral concoction into laboratory mice, and found a strong immune response was generated against the vaccine. Also, when the scientists extracted the antibodies produced by the mice and put them in test tubes, it gobbled up cocaine. They also saw that mice that received both the vaccine and cocaine were much less hyperactive than untreated mice given cocaine.

In this study, the researchers sought to precisely define how effective the anti-cocaine vaccine is in non-human primates, who are closer in biology to humans than mice.

They developed a tool to measure how much cocaine attached to the dopamine transporter, which picks up dopamine in the synapse between neurons and brings it out to be recycled. If cocaine is in the brain, it binds on to the transporter, effectively blocking the transporter from ferrying dopamine out of the synapse, keeping the neurotransmitter active to produce a drug high.

The PET studies showed no difference in the binding of the tracer to the dopamine transporter in vaccinated compared to unvaccinated animals if these two groups were not given cocaine. But when cocaine was given to the primates, there was a significant drop in activity of the tracer in non-vaccinated animals. That meant that without the vaccine, cocaine displaced the tracer in binding to the dopamine receptor. Previous research had shown in humans that at least 47 percent of the dopamine transporter had to be occupied by cocaine in order to produce a drug high. The researchers found, in vaccinated primates, that cocaine occupancy of the dopamine receptor was reduced to levels of less than 20 percent.

“This is a direct demonstration in a large animal, using nuclear medicine technology, that we can reduce the amount of cocaine that reaches the brain sufficiently so that it is below the threshold by which you get the high,” says Dr. Crystal.

When the vaccine is studied in humans, the non-toxic dopamine transporter tracer can be used to help study its effectiveness as well, he adds.

The researchers do not know how often the vaccine needs to be administered in humans to maintain its anti-cocaine effect. One vaccine lasted 13 weeks in mice and seven weeks in non-human primates.

What Is the Effect of Hierarchy on Moral Behavior?

“An anti-cocaine vaccination will require booster shots in humans, but we don’t know yet how often these booster shots will be needed,” says Dr. Crystal. “I believe that for those people who desperately want to break their addiction, a series of vaccinations will help.”

Notes about this neuropharmacology and addiction treatment research

The study was funded by grants from the National Institute on Drug Abuse (NIDA).

The Cornell Center for Technology Enterprise and Commercialization, on behalf of Cornell University, has filed a patent application based on the research described in this press release. Dr. Crystal is named as a co-inventor on the patent application.

Dr. Vallabhajosula has consultation agreements with two radio-pharmaceutical companies. All other authors declare no conflicts of interest.