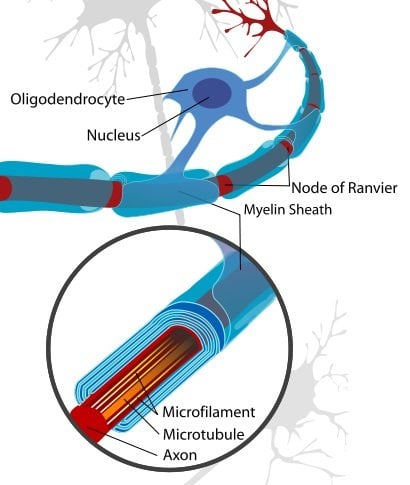 Multiple sclerosis is characterized by the destruction of myelin. This damage can impair neurotransmission, resulting in cognitive and mobility dysfunction. This image is a neuron cell diagram, cropped to show oligodendrocyte and myelin sheath.
Home
Featured

Case Western Reserve University School of Medicine scientists have developed a novel molecular probe detectable by positron emission tomography (PET) imaging. The new molecular marker, MeDAS, offers the first non-invasive visualization of myelin integrity of the entire spinal cord at the same time, as published today in an article in the Annals of Neurology.

“While MS originates in the immune system, the damage occurs to the myelin structure of the central nervous system. Our discovery brings new hope to clinicians who may be able to make an accurate diagnosis and prognosis in as little as a few hours compared to months or even years,” said Yanming Wang, PhD, senior author of study and associate professor of radiology at Case Western Reserve University School of Medicine. “Because of its shape and size, it is particularly difficult to directly detect myelin damage in the spinal cord; this is the first time we have been able to image its function at the molecular level.”

As the most common acquired autoimmune disease currently affecting more than two million people worldwide, MS is characterized by destruction of myelin, the membrane that protects nerves. Once damaged, it inhibits the nerves’ ability to transmit electrical impulses, causing cognitive impairment and mobility dysfunction. So far, there is no cure for MS, therapies are only available that modify the symptoms.

In addition to its role in monitoring the effects of myelin-repair drugs currently under development, the new imaging tool offers a real-time quantitative clinical diagnosis of MS. A long lag exists between the onset of disease, physical symptoms in the patient and diagnosis via behavioral testing and magnetic resonance imaging (MRI). The lesions, or plaques, as detected by a MRI in the brain and spinal cord are not myelin specific and thus poorly associated with a patient’s disease severity or progression. There is an urgent need to find a new imaging marker that correlates with a patient’s pathology.

“This discovery has open the door to develop new drugs that can truly restore nerve function, not just modify the symptoms,” said Robert Miller, PhD, co-author on the study, vice president for research for Case Western Reserve and the Allen C. Holmes Professor of Neurological Diseases at the School of Medicine. “A cure for MS requires both repairing myelin and a tool to measure the mechanism.”

For the past 20 years, Miller’s lab has been working tirelessly to create new myelin-repair therapies that would restore nerve function. Successful translation of new drugs from animal studies to human clinical trials is contingent upon researchers’ ability to measure and evaluate the effectiveness of a therapy.

Created by Wang’s laboratory, the MeDAS molecular probe works like a homing device. Injected into the body intravenously, it is programmed to seek out and bind only to myelin in the central nervous system, i.e., the brain, spinal cord and optic nerves. A positron-emitting radioisotope label on the molecule allows a PET scanner to detect the targets and quantify their intensity and location. The data can then be reconstructed into an image as shown in the article (see the notes section).

“This is an indispensable tool to help find a new way to treat MS down the road” said Chunying Wu, PhD, first author of the study and instructor of radiology at Case Western Reserve. “It can also be used as a platform technology to unlock the mysteries of other myelin related diseases such as spinal cord injury.”

Flawed Quality Control in the Brain

The Case Western Reserve research team has completed preclinical studies in animals and has begun the process of initiating human trials.