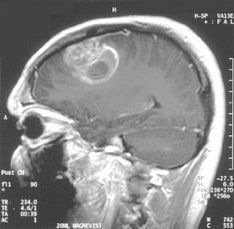 In tests on laboratory rats with human brain cancers, DI-loaded nanoparticles significantly increased median survival to 280 days, researchers report. The image is a magnetic resonance image (MRI) of a sagittal view revealing a mass in the brain that was later shown to be glioblastoma.
Home
Brain Cancer

Scientists have developed a new approach for treating a deadly brain cancer that strikes 15,000 in the United States annually and for which there is no effective long-term therapy. The researchers, from Yale and Johns Hopkins, have shown that the approach extends the lives of laboratory animals and are preparing to seek government approval for a human clinical trial.

“We wanted to make a system that would penetrate into the brain and deliver drugs to a greater volume of tissue,” said Mark Saltzman, a biomedical engineer at Yale and principal investigator of the research. “Drugs have to get to tumor cells in order to work, and they have to be the right drugs.”

Results were published July 1 in the Proceedings of the National Academy of Sciences.

Glioblastoma multiforme is a malignant cancer originating in the brain. Median survival with standard care — surgery plus chemotherapy plus radiation — is just over a year, and the five-year survival rate is less than 10 percent.

The researchers developed a new, ultra-small drug-delivery particle that more nimbly navigates brain tissue than do existing options. They also identified and tested an existing FDA-approved drug — a fungicide called dithiazanine iodide (DI) — and found that it can kill the most aggressive tumor-causing cells.

“This approach addresses limitations of other forms of therapy by delivering drugs directly to the area most needed, obviating systemic side-effects, and permitting the drug to reside for weeks,” said neurosurgeon Dr. Joseph M. Piepmeier, a member of the research team. Piepmeier leads clinical research for Yale Cancer Center’s brain tumor program.

The drug-loaded nanoparticles are administered in fluid directly to the brain through a catheter, bypassing the blood-brain barrier. The particles’ tiny size — their diameter is about 70 nanometers — facilitates movement within brain tissue. They release their drug load gradually, offering sustained treatment.

In tests on laboratory rats with human brain cancers, DI-loaded nanoparticles significantly increased median survival to 280 days, researchers report. Maximum median survival time for rats treated with other therapies was 180 days, and with no treatment, survival was 147 days. Tests on pigs established that the new drug-particle combination also diffuses deep into brains of large animals.

The nanoparticles are made of polymers, or strings of repeating molecules. Their size, ability to control release, and means of application help them permeate brain tissues.

Researchers screened more than 2,000 FDA-approved drugs in the hunt for candidates that would kill the cells most responsible for human tumor development, brain cancer stem cells. Overall, DI worked best.

The scientists believe the particles can be adapted to deliver other drugs and to treat other central nervous system diseases, they said.

Jiangbing Zhou, assistant professor of neurosurgery and of biomedical engineering at Yale, and Toral Patel, chief resident in neurosurgery at Yale, are co-lead authors. The published paper includes a full list of co-authors.

Support for the research was provided by the National Institutes of Health, the Chicago Institute of Neurosurgery and Neuroresearch Foundation, the Voices Against Brain Cancer Foundation, the B*Cured Foundation, the Yale Institute for Nanoscience and Quantum Engineering, and the Connecticut Brain Tumor Alliance.