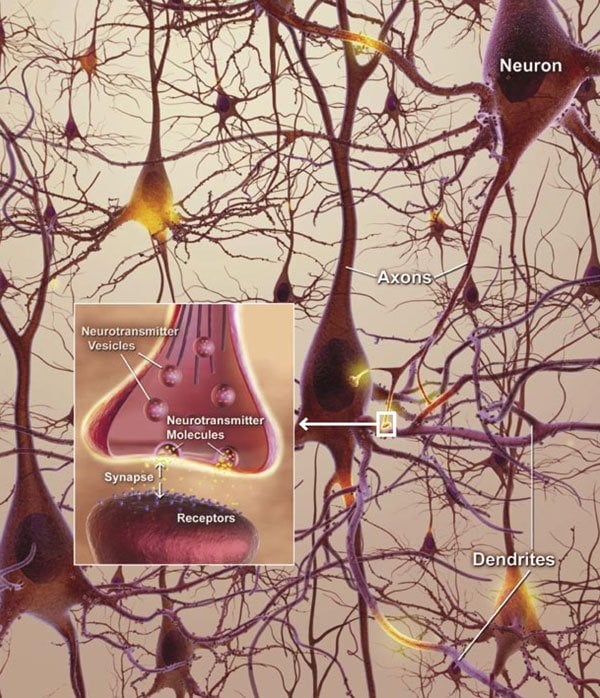 One of the initial events in Alzheimer's disease is the disruption of the brain's synapses which can lead to apoptosis. The research suggests that the protein caspace-2 could drive this process. This is a diagram of neurons in the brain and also shows the role of the synapse.
Home
Featured

Researchers at Columbia University Medical Center (CUMC) have demonstrated that a protein called caspase-2 is a key regulator of a signaling pathway that leads to cognitive decline in Alzheimer’s disease. The findings, made in a mouse model of Alzheimer’s, suggest that inhibiting this protein could prevent the neuronal damage and subsequent cognitive decline associated with the disease. The study was published this month in the online journal Nature Communications.

One of the earliest events in Alzheimer’s is disruption of the brain’s synapses (the small gaps across which nerve impulses are passed), which can lead to neuronal death. Although what drives this process has not been clear, studies have indicated that caspace-2 might be involved, according to senior author Michael Shelanski, MD, PhD, the Delafield Professor of Pathology & Cell Biology, chair of the Department of Pathology and Cell Biology, and co-director of the Taub Institute for Research on Alzheimer’s Disease and the Aging Brain at CUMC.

Several years ago, in tissue culture studies of mouse neurons, Dr. Shelanski found that caspace-2 plays a critical role in the death of neurons in the presence of amyloid beta, the protein that accumulates in the neurons of people with Alzheimer’s. Other researchers have shown that caspase-2 also contributes to the maintenance of normal synaptic functions.

Dr. Shelanski and his team hypothesized that aberrant activation of caspase-2 may cause synaptic changes in Alzheimer’s disease. To test this hypothesis, the researchers crossed J20 transgenic mice (a common mouse model of Alzheimer’s) with caspase-2 null mice (mice that lack caspase-2). They compared the animals’ ability to negotiate a radial-arm water maze, a standard test of cognitive ability, with that of regular J20 mice and of normal mice at 4, 9, and 14 months of age.

The results for the three groups of mice were similar at the first two intervals. At 14 months, however, the J20/caspase-2 null mice did significantly better in the water maze test than the J20 mice and similarly to the normal mice. “We showed that removing caspase-2 from J20 mice prevented memory impairment — without significant changes in the level of soluble amyloid beta,” said co-lead author Roger Lefort, PhD, associate research scientist at CUMC.

Analysis of the neurons showed that the J20/caspase-2 null mice had a higher density of dendritic spines than the J20 mice. The more spines a neuron has, the more impulses it can transmit.

“The J20/caspase-2 null mice showed the same dendritic spine density and morphology as the normal mice—as opposed to the deficits in the J20 mice,” said co-lead author Julio Pozueta, PhD. “This strongly suggests that caspase-2 is a critical regulator in the memory decline associated with beta-amyloid in Alzheimer’s disease.”

The researchers further validated the results in studies of rat neurons in tissue culture.

“This raises the possibility that if you can inhibit one or all of these molecules, especially early in the course of Alzheimer’s, you might be able to protect neurons and slow down the cognitive effects of the disease,” said Dr. Lefort.

The paper is titled, “Caspase-2 is required for dendritic spine and behavioural alterations in J20 APP transgenic mice.” The other contributors are Julio Pozueta, PhD (co-lead author), Elena M. Ribe, Carol M. Troy, and Ottavio Arancio, all based at CUMC at the time of the study.

Dr. Pozueta was an associate research scientist at CUMC at the time of this research and is currently a senior analyst at Prescient Life Sciences. The remaining authors declare no financial or other conflicts of interests.

The study was supported by grants from the National Institutes of Health (NIHAG08702 and NS15076), the Wallace Foundation for Research, and the Taub Foundation.