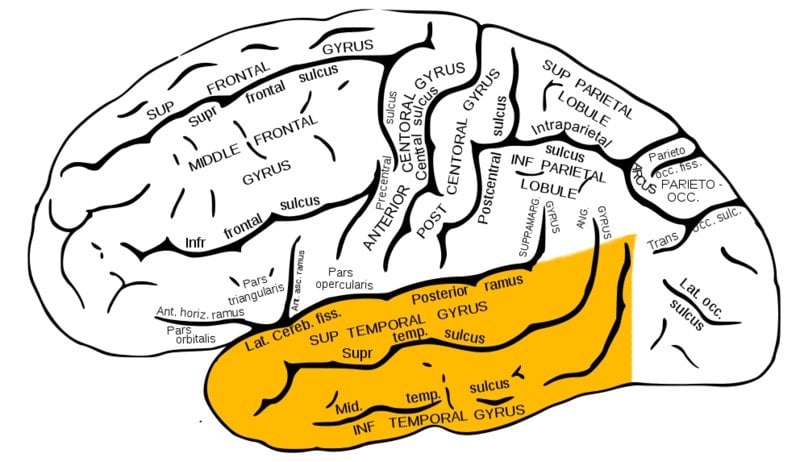 Despite lack of significant difference in the total amount of amyloid in the brain, the spatial patterns between the two groups (stable and declining) were different, with the former showing relatively early accumulation in the frontal lobes and the latter in the temporal lobes. This brain diagram highlights the location of the temporal lobe.
Home
Featured

The trajectory of amyloid plaque buildup—clumps of abnormal proteins in the brain linked to Alzheimer’s disease—may serve as a more powerful biomarker for early detection of cognitive decline rather than using the total amount to gauge risk, researchers from Penn Medicine’s Department of Radiology suggest in a new study published online July 15 in the journal Neurobiology of Aging.

Amyloid plaque that starts to accumulate relatively early in the temporal lobe, compared to other areas and in particular to the frontal lobe, was associated with cognitively declining participants, the study found. “Knowing that certain brain abnormality patterns are associated with cognitive performance could have pivotal importance for the early detection and management of Alzheimer’s,” said senior author Christos Davatzikos, PhD, professor in the Department of Radiology, the Center for Biomedical Image Computing and Analytics, at the Perelman School of Medicine at the University of Pennsylvania.

Today, memory decline and Alzheimer’s—which 5.4 million Americans live with today—is often assessed with a variety of tools, including physical and bio fluid tests and neuroimaging of total amyloid plaque in the brain. Past studies have linked higher amounts of the plaque in dementia-free people with greater risk for developing the disorder. However, it’s more recently been shown that nearly a third of people with plaque on their brains never showed signs of cognitive decline, raising questions about its specific role in the disease.

Now, Dr. Davatzikos and his Penn colleagues, in collaboration with a team led by Susan M. Resnick, PhD, Chief, Laboratory of Behavioral Neuroscience at the National Institute on Aging (NIA), used Pittsburgh compound B (PiB) brain scans from the Baltimore Longitudinal Study of Aging’s Imaging Study and discovered a stronger association between memory decline and spatial patterns of amyloid plaque progression than the total amyloid burden.

“It appears to be more about the spatial pattern of this plaque progression, and not so much about the total amount found in brains. We saw a difference in the spatial distribution of plaques among cognitive declining and stable patients whose cognitive function had been measured over a 12-year period. They had similar amounts of amyloid plaque, just in different spots,” Dr. Davatzikos said. “This is important because it potentially answers questions about the variability seen in clinical research among patients presenting plaque. It accumulates in different spatial patterns for different patients, and it’s that pattern growth that may determine whether your memory declines.”

The team, including first author Rachel A. Yotter, PhD, a postdoctoral researcher in the Section for Biomedical Image Analysis, retrospectively analyzed the PET PiB scans of 64 patients from the NIA’s Baltimore Longitudinal Study of Aging whose average age was 76 years old. For the study, researchers created a unique picture of patients’ brains by combining and analyzing PET images measuring the density and volume of amyloid plaque and their spatial distribution within the brain. The radiotracer PiB allowed investigators to see amyloid temporal changes in deposition.

Those images were then compared to California Verbal Learning Test (CLVT) scores, among other tests, from the participants to determine the longitudinal cognitive decline. The group was then broken up into two subgroups: the most stable and the most declining individuals (26 participants).

Despite lack of significant difference in the total amount of amyloid in the brain, the spatial patterns between the two groups (stable and declining) were different, with the former showing relatively early accumulation in the frontal lobes and the latter in the temporal lobes.

A particular area of the brain may be affected early or later depending on the amyloid trajectory, according to the authors, which in turn would affect cognitive impairment. Areas affected early with the plaque include the lateral temporal and parietal regions, with sparing of the occipital lobe and motor cortices until later in disease progression.

“This finding has broad implications for our understanding of the relationship between cognitive decline and resistance and amyloid plaque location, as well as the use of amyloid imaging as a biomarker in research and the clinic,” said Dr Davatzikos. “The next step is to investigate more individuals with mild cognitive impairment, and to further investigate the follow-up scans of these individuals via the BLSA study, which might shed further light on its relevance for early detection of Alzheimer’s.”

This research was supported in part by NIH grant NIA-R01-14971, by the Intramural Research Program of the NIH, National Institute on Aging and by NIA Research and Development Contract HHSN-260-2004-00012C.