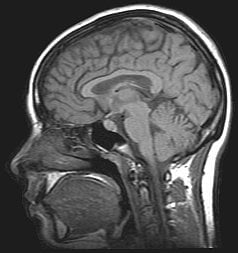 Researchers develop a new method of quantitatively measuring human brain tissue using MRI neuroimaging. This is an MRI brain scan image and is used for illustrative purposes only. Credit provided below.
Home
Featured

Researchers used magnetic resonance imaging to quantify brain tissue volume, a critical measurement of the progression of multiple sclerosis and other diseases.

Imagine that your mechanic tells you that your brake pads seem thin, but doesn’t know how long they will last. Or that your doctor says your child has a temperature, but isn’t sure how high. Quantitative measurements help us make important decisions, especially in the doctor’s office. But a potent and popular diagnostic scan, magnetic resonance imaging (MRI), provides mostly qualitative information.

An interdisciplinary Stanford team has now developed a new method for quantitatively measuring human brain tissue using MRI. The team members measured the volume of large molecules (macromolecules) within each cubic millimeter of the brain. Their method may change the way doctors diagnose and treat neurological diseases such as multiple sclerosis.

“We’re moving from qualitative – saying something is off – to measuring how off it is,” said Aviv Mezer, postdoctoral scholar in psychology. The team’s work, funded by research grants from the National Institutes of Health, appears in the journal Nature Medicine.

Mezer, whose background is in biophysics, found inspiration in seemingly unrelated basic research from the 1980s. In theory, he read, magnetic resonance could quantitatively discriminate between different types of tissues.

“Do the right modifications to make it applicable to humans,” he said of adapting the previous work, “and you’ve got a new diagnostic.”

Mezer and Wandell, working with neuroscientists, radiologists and chemical engineers, calibrated their method with a physical model – a radiological “phantom” – filled with agar gel and cholesterol to mimic brain tissue in MRI scans.

The team used one of Stanford’s own MRI machines, located in the Center for Cognitive and Neurobiological Imaging, or CNI. Wandell directs the two-year-old center. Most psychologists, he said, don’t have that level of direct access to their MRI equipment.

“Usually there are many people between you and the instrument itself,” Wandell said.

This study wouldn’t have happened, Mezer said, without the close proximity and open access to the instrumentation in the CNI.

Their results provided a new way to look at a living brain.

MRI images of the brain are made of many “voxels,” or three-dimensional elements. Each voxel represents the signal from a small volume of the brain, much like a pixel represents a small volume of an image. The fraction of each voxel filled with brain tissue (as opposed to water) is called the macromolecular tissue volume, or MTV. Different areas of the brain have different MTVs. Mezer found that his MRI method produced MTV values in agreement with measurements that, until now, could only come from post-mortem brain specimens.

This is a useful first measurement, Mezer said. “The MTV is the most basic entity of the structure. It’s what the tissue is made of.”

The team applied its method to a group of multiple sclerosis patients. MS attacks a layer of cells called the myelin sheath, which protects neurons the same way insulation protects a wire. Until now, doctors typically used qualitative MRI scans (displaying bright or dark lesions) or behavioral tests to assess the disease’s progression.

Speech or Song? Identifying How the Brain Perceives Music

Myelin comprises most of the volume of the brain’s “white matter,” the core of the brain. As MS erodes myelin, the MTV of the white matter changes. Just as predicted, Mezer and Wandell found that MS patients’ white matter tissue volumes were significantly lower than those of healthy volunteers. Mezer and colleagues at Stanford School of Medicine are now following up with the patients to evaluate the effect of MS drug therapies. They’re using MTV values to track individual brain tissue changes over time.

The team’s results were consistent among five MRI machines.

Mezer and Wandell will next use MRI measurements to monitor brain development in children, particularly as the children learn to read. Wandell’s previous work mapped the neural connections involved in learning to read. MRI scans can measure how those connections form.

“You can compare whether the circuits are developing within specified limits for typical children,” Wandell said, “or whether there are circuits that are wildly out of spec, and we ought to look into other ways to help the child learn to read.”

Tracking MTV, the team said, helps doctors better compare patients’ brains to the general population – or to their own history – giving them a chance to act before it’s too late.