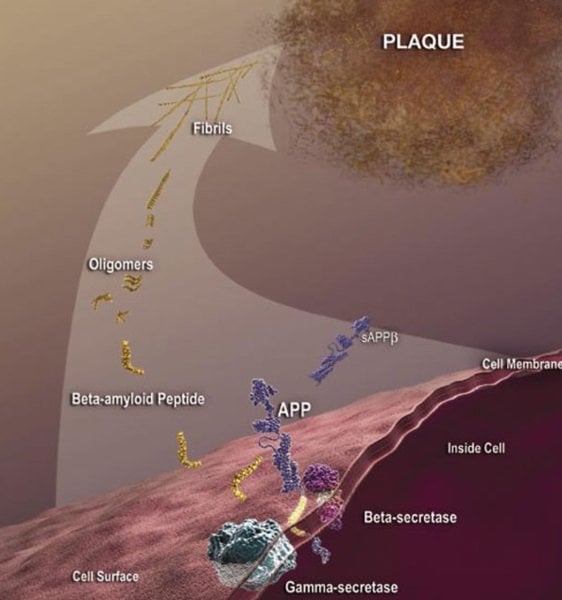 Earlier studies of the human brain after death and using animal research had suggested that amyloid beta 42 was the most important contributor to Alzheimer’s. The new study not only confirms this connection but also quantifies overproduction of amyloid beta 42 for the first time in living human brains. The diagram shows beta-amyloid plaque formation in Alzheimer's disease.
Home
Featured

Scientists at Washington University School of Medicine in St. Louis have measured a significant and potentially pivotal difference between the brains of patients with an inherited form of Alzheimer’s disease and healthy family members who do not carry a mutation for the disease.

Researchers have known that amyloid beta, a protein fragment, builds up into plaques in the brains of Alzheimer’s patients. They believe the plaques cause the memory loss and other cognitive problems that characterize the disease. Normal brain metabolism produces different forms of amyloid beta.

The new study shows that research participants with genetic mutations that cause early-onset Alzheimer’s make about 20 percent more of a specific form of amyloid beta – known as amyloid beta 42 – than family members who do not have the Alzheimer’s mutation.

“These results indicate how much we should target amyloid beta 42 with Alzheimer’s drugs,” said Randall Bateman, MD, the Charles F. and Joanne Knight Distinguished Professor of Neurology. “We are hopeful that this and other research will lead to preventive therapies to delay or even possibly prevent Alzheimer’s disease.”

In addition to helping develop treatments for inherited Alzheimer’s, investigations of these conditions have helped scientists lay the groundwork for advances in treatment of the much more common sporadic forms of the disease.

Three forms account for most of the amyloid beta found in the cerebrospinal fluid: amyloid beta 38, 40 and 42. Earlier studies of the human brain after death and using animal research had suggested that amyloid beta 42 was the most important contributor to Alzheimer’s. The new study not only confirms this connection but also quantifies overproduction of amyloid beta 42 for the first time in living human brains.

Bateman, who co-developed a technique that measures the rate at which amyloid beta is produced and cleared from the cerebrospinal fluid, contacted several Washington University colleagues to see if they could develop a way to analyze the types of amyloid beta being produced in the brain.

The scientists applied the model to data from 11 research participants with Alzheimer’s mutations and 12 related family members who did not have the genetic errors that cause Alzheimer’s. The model let the scientists compare the production rates of the protein’s different forms, revealing an increase in amyloid beta 42 production in subjects with an Alzheimer’s gene.

“Working in isolation, any one of us would likely have gotten the wrong answer, or no answer,” Elbert said. “Bringing our different skill sets together let us tackle a very complex physiological problem.”

Scientists are testing the new model on data from approximately 100 Alzheimer’s patients.

“We hope that our new insights about the production and clearance of amyloid beta proteins will pave the way for future studies aimed at understanding and altering the metabolic processes that underlie this devastating disease,” Patterson said.

Bateman, Elbert and Patterson have applied for a patent on the diagnostic use of their new model of amyloid beta metabolism. Bateman and co-author David M. Holtzman, MD, the Andrew B. and Gretchen P. Jones Professor and head of the Department of Neurology, are co-inventors of SILK (stable isotope linked kinetics), the technique for tracking amyloid beta production used in this study. The financial interests of the researchers and the university in the patent application and the existing patent are managed in accordance with conflict-of-interest policies and regulations.