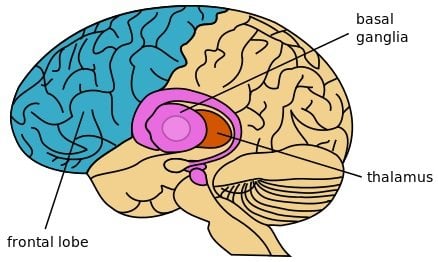 Genes alone don't determine how the cerebal cortex grows into seperate functional areas, Input from the thalamus is also crucially required. The brain diagram shows the location of the thalamus, highlighted in red.
Home
Featured

Scientists at the Salk Institute for Biological Studies have demonstrated that sensory regions in the brain develop in a fundamentally different way than previously thought, a finding that may yield new insights into visual and neural disorders.

In a paper published June 7, 2013, in Science, Salk researcher Dennis O’Leary and his colleagues have shown that genes alone do not determine how the cerebral cortex grows into separate functional areas. Instead, they show that input from the thalamus, the main switching station in the brain for sensory information, is crucially required.

O’Leary has done pioneering studies in “arealization,” the way in which the neo-cortex, the major region of cerebral cortex, develops specific areas dedicated to particular functions. In a landmark paper published in Science in 2000, he showed that two regulatory genes were critically responsible for the general pattern of the neo-cortex, and has since shown distinct roles for other genes in this process. In this new set of mouse experiments, his laboratory focused on the visual system, and discovered a new, unexpected twist to the story.

“In order to function properly, it is essential that cortical areas are mapped out correctly, and it is this architecture that was thought to be genetically pre-programmed,” says O’Leary, holder of the Vincent J. Coates Chair in Molecular Neurobiology at Salk. “To our surprise, we discovered thalamic input plays an essential role far earlier in brain development.”

Vision is relayed from the outside world into processing areas within the brain. The relay starts when light hits the retina, a thin strip of cells at the back of the eye that detects color and light levels and encodes the information as electrical and chemical signals. Through retinal ganglion cells, those signals are then sent into the Lateral Geniculate Nucleus (LGN), a structure in thalamus.

In the next important step in the relay, the LGN routes the signals into the primary visual area (V1) in the neo-cortex, a multi-layered structure that is divided into functionally and anatomically distinct areas. V1 begins the process of extracting visual information, which is further carried out by “higher order” visual areas in the neo-cortex that are vitally important to visual perception. Like parts in a machine, the functions of these areas are both individual and integrated. Damage in one tiny area can lead to strange visual disorders in which a person may be able to see a moving ball, and yet not perceive it is in motion.

Current dogma holds that this basic architecture is entirely genetically determined, with environmental input only playing a role later in development. One of the most famous examples of this idea is the Nobel Prize-winning work of visual neuroscientists David Hubel and Torsten Wiesel, which showed that there is a “critical period” of sensitivity in vision. Their finding was commonly interpreted as a warning that without exposure to basic visual stimuli early in life, even an individual with a healthy brain will be unable to see correctly.

Later discoveries in neural plasticity more optimistically suggested that early deprivation can be overcome, and the brain can even sprout new neurons in specific areas. Nevertheless, this still reinforced the idea that environmental influences might modify neural architecture, but only genetics could establish how cortical areas would be laid out.

In their new study, however, O’Leary and the paper’s co-first authors, Shen-Ju Chou and Zoila Babot, post-doctoral researchers in O’Leary’s laboratory, show that genetics only provides a broad field in the neo-cortex for visual areas.

When they created mouse mutants that disconnected the link between thalamus and cortex but only after early cortical development was complete, they found that the primary and higher order visual areas failed to differentiate from one another as they should.

“Our new understanding is that genes only create a rough lay-out of cortical areas,” explains O’Leary. “There must be thalamic input to develop the fine differentiation necessary for proper sensory processing.”

Essentially, if the brain were a house, genes would determine which areas were bedrooms. Thalamic input provides the details, distinguishing what will be the master bedroom, a child’s bedroom, a guest bedroom and so on. “The size and location of areas within the overall cortex does not change, but without thalamic input from the LGN, the critical differentiation process that creates primary and higher order visual areas does not happen,” says O’Leary.

Repeated Infections Associated With Increased Risk of Some Neurodegenerative Diseases

Given that most sensory modalities—sight, hearing, touch—route through thalamus to cortex, this experiment may suggest why, when someone lacks a sensory modality from birth, that individual has a harder time processing restored sensory input than someone who lost the sense later in life. But in addition, as O’Leary says, “More subtle changes in thalamic input in humans would also likely result in changes to the neo-cortex that could well have a substantial impact on the ability to process vision, or other senses, and lead to abnormal behavior.”

O’Leary says his lab plans to continue to explore the links between how cortical areas in the brain are established and various developmental disorders, such as autism.

Other researchers on the study were Axel Leingärtner and Yasushi Nakagawa of the Salk Institute, and Michele Studer, of the Institute of Biology Valrose, INSERM in France.

This work was supported by the National Institutes of Health, the Agence National de la Recherche 2009 Chaires dâ Excellence Program, the Spanish Ministry of Education and Science and the Generalitat de Catalunya.