Scientists at Rice University and the University of Miami have figured out how synthetic molecules designed at Rice latch onto the amyloid peptide fibrils thought to be responsible for Alzheimer’s disease. Their discovery could point the way toward therapies to halt or even reverse the insidious disease.

The metallic dipyridophenazine ruthenium molecules strongly bind to pockets created when fibrils form from misfolded proteins that cells fail to destroy. When excited under a spectroscope, the molecules luminesce, which indicates the presence of the fibrils. That much was known by Rice researchers, but until now the process was a mystery.

By combining their talents in biophysics (at Rice) and computer simulation (at Miami), researchers pinpointed four such pockets along the fibril where the hydrophobic (water-averse) molecules can bind. They believe their work will help chemists design molecules to keep the fibrils from forming the plaques found in Alzheimer’s patients.

A molecular simulation of amyloid fibrils shows how a metallic complex created at Rice University links to pockets created when the fibrils aggregate. The magenta wires represent monomer subunits that combine to form the green fibrils. Image credited to Mehmet Ozbil/University of Miami

The teams led by Rice chemist Angel Martí and Miami chemist Rajeev Prabhakar reported their results in the Journal of the American Chemical Society this month.

Two years ago, Martí and Nathan Cook, a graduate student in his lab and lead author of the new paper, combined ruthenium complexes with solutions containing the spaghetti-like amyloid fibrils. The complexes don’t luminesce by themselves, but when they link to an amyloid fibril, they can be triggered by light at one wavelength to glow at another; this helps the researchers “see” the fibrils.

This ability to track amyloids was a great step forward, but left open the question of why the complexes latched onto the fibrils at all, Cook said.

“We had no way to figure it out because our experimental techniques can’t identify binding sites,” he said. “The standard (used to analyze proteins) is to crystallize your material and use X-rays to determine where everything is positioned. The problem with amyloid beta is the fibrils are not uniform, and you can’t crystallize them. All you would get is an amorphous lump.”

But a door opened when Prabhakar, a theoretical and computational chemist who specializes in amyloids, contacted Martí and suggested a collaboration. “We both knew the other was working with amyloid betas,” Martí said. “We were able to figure out how many amyloid beta monomers (molecules that can bind with each other) had to come together to form fibrils, while he modeled the interactions. When we brought all the data together, we had a perfect match.”

“Basically, we learned from the model that we need two monomers to form a binding site,” Marti said. “The cleft where the ruthenium complex binds is completely hydrophobic, the same as the complex. Neither wants to be exposed to water, so when they find each other, they don’t have a choice but to come together. It turns out that’s exactly what needs to happen to turn on the photoluminescent response of the compound.”

Martí said testing various concentrations of monomers with ruthenium complexes helped them determine that a little more than two monomers, on average, was sufficient to get the “light switch” effect. Prabhakar’s analysis found four specific locations along the aggregating monomers where the ruthenium complexes could bind: two at the ends where the monomers tend to bind to each other, and two in the middle. 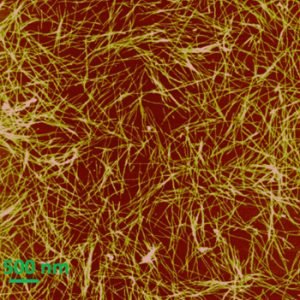 Ruthenium complex molecules created at Rice University “light up” when they bind with amyloid fibrils, as seen under a microscope above. A collaboration with scientists at the University of Miami revealed how the molecules attach to a fibrils, a discovery that could lead to new therapies for Alzheimer’s patients. Image credited to Nathan Cook/Rice University

“It was a complicated system to model and we tried hard, using a variety of computational techniques,” Prabhakar said. “In the end, we were amazed to find our results in perfect agreement with the experiments performed in the Martí lab.”

The researchers called the end locations “A and B,” and the middle clefts “C and D.” The hydrophobic A and B sites exist only at the edges of the fibrils, which limits their exposure to the complexes, Martí said. “But there are lots of C and D sites,” he said. “That explains why the ruthenium complexes don’t inhibit the aggregation of fibrils. It seems the system prefers to bind another monomer, rather than a ruthenium complex, at the ends.

“But now that we understand the mechanism, we can design more hydrophobic complexes that could bind strongly to the ends and prevent further elongation of the fibril,” he said.

“There’s a whole variety of ways to tweak this that could potentially disrupt a binding pocket,” Cook said.

More challenges lie beyond the new discovery, he said. New research indicates toxic oligomers may be catalyzed by the formation of amyloid fibrils. “We might be able to prevent the formation of these oligomeric species by binding ruthenium complexes to the surface, which would completely change the surface chemistry of the fibrils,” Martí said. “These are the things we are really interested in doing right now.”

The Welch Foundation, the National Science Foundation and the James and Esther King Biomedical Research Program of the Florida State Health Department supported the research.