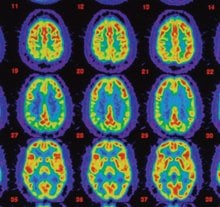 Researchers are aware that Bace1, a protease emzyme which breaks down proteins into smaller molecules, is involved with the development of Alzheimer's disease. This image, used for illustrative purposes, shows PET brain scans of a patient with Alzheimer's disease.
Home
Featured

Researchers in Berlin and Munich, Germany and Oxford, United Kingdom, have revealed that a protein well known for its role in Alzheimer’s disease controls spindle development in muscle and leads to impaired movement in mice when the protein is absent or treated with inhibitors. The results, which are published in The EMBO Journal, suggest that drugs under development to target the beta-secretase-1 protein, which may be potential treatments for Alzheimer’s disease, might produce unwanted side effects related to defective movement.

Alzheimer’s disease is the most common form of dementia found in older adults. The World Health Organization estimates that approximately 18 million people worldwide have Alzheimer’s disease. The number of people affected by the disease may increase to 34 million by 2025. Scientists know that the protein beta-secretase-1 or Bace1, a protease enzyme that breaks down proteins into smaller molecules, is involved in Alzheimer’s disease. Bace1 cleaves the amyloid precursor protein and generates the damaging Abeta peptides that accumulate as plaques in the brain leading to disease. Now scientists have revealed in more detail how Bace1 works.

“Our results show that mice that lack Bace1 proteins or are treated with inhibitors of the enzyme have difficulties in coordination and walking and also show reduced muscle strength,” remarked Carmen Birchmeier, one of the authors of the paper, Professor at the Max-Delbrück-Center for Molecular Medicine in Berlin, Germany, and an EMBO Member. “In addition, we were able to show that the combined activities of Bace1 and another protein, neuregulin-1 or Nrg1, are needed to sustain the muscle spindles in mice and to maintain motor coordination.”

Muscle spindles are sensory organs that are found throughout the muscles of vertebrates. They are able to detect how muscles stretch and convey the perception of body position to the brain. The researchers used genetic analyses, biochemical studies and interference with pharmacological inhibitors to investigate how Bace1 works in mice. “If the signal strength of a specific form of neuregulin-1 known as IgNrg1 is gradually reduced, increasingly severe defects in the formation and maturation of muscle spindles are observed in mice. Furthermore, it appears that Bace1 is required for full IgNrg1 activity. The graded loss of IgNrg1 activity results in the animals having increasing difficulties with movement and coordination,” says Cyril Cheret, the first author of the work.

Drug developers are interested in stopping the Bace1 protein in its tracks because it represents a promising route to treat Alzheimer’s disease. If the protein were inhibited, it would interfere with the generation of the smaller damaging proteins that accumulate in the brain as amyloid plaques and would therefore provide some level of protection from the effects of the disease. “Our data indicate that one unwanted side effect of the long-term inhibition of Bace1 might be the disruption of muscle spindle formation and impairment of movement. This finding is relevant to scientists looking for ways to develop drugs that target the Bace1 protein and should be considered,” says Birchmeier. Several Bace1 inhibitors are currently being tested in phase II and phase III clinical trials for the treatment of Alzheimer’s disease.