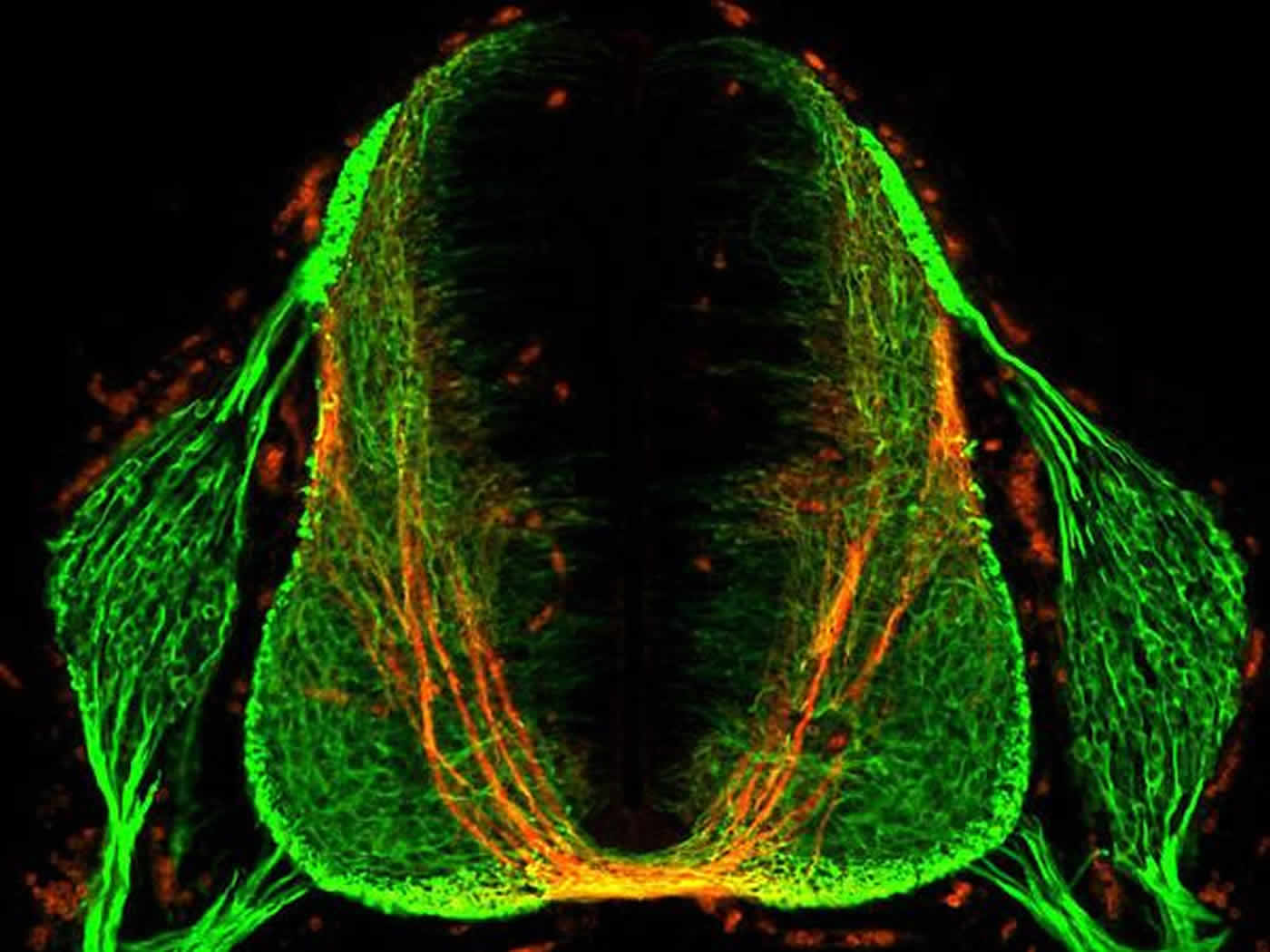 This image shows a section of the spinal cord of a mouse embryo. Neurons appear green, and those that express the Robo3 receptor are labeled red. Commissural axons appear as long, u-shaped threads, and the bottom, yellow segment of the structure represents the midline. Credit: Laboratory of Brain Development and Repair at The Rockefeller University.

How Neurons Find Their Way in the Developing Brain

During embryonic development, billions of neurons nimbly reposition themselves within the brain and spinal cord, and connect branches to form the neural circuits that ultimately control our movements, perception, and memory. Scientists have long sought to understand the driving forces in this meticulously choreographed dance, in which each cell seems to know precisely where to be to at any given time, and with what other cells it must link.

In particular, intensive research has been focused on axon guidance, a process in which a neuron sends a wiry extension to seek out a partner cell and connect to it. In a study published today in Science, Rockefeller University researchers report on their discovery of a molecule secreted by cells in the spinal cord that helps guide axons during a critical stage of central nervous system (CNS) development.

“A type of cell called a commissural neuron projects axons from one side of the nervous system to the other, across an embryonic structure known as the midline,” explains Marc Tessier-Lavigne, who led the research. Tessier-Lavigne is the Carson Family Professor and head of the Laboratory of Brain Development and Repair, and President of Rockefeller University. Working in mice, Tessier-Lavigne, postdoctoral fellow Alexander Jaworski (now on the faculty at Brown University), and their collaborators identified the new axon guidance factor, NELL2, and elucidated how it makes commissural axons creep toward the midline, and how the axons then depart from this area to reach their final destination.

Commissural neurons build circuits that connect the right and left sides of the CNS. A number of inborn diseases have been linked to early developmental failures in which commissural axons lose their way and make inappropriate connections.

In the past two decades, work led by Tessier-Lavigne and others has identified a number of cell-secreted molecules — including two groups of proteins called Netrins and Slits–that direct the routes of these axons. These factors can directionally attract or repel axons by binding to receptors on their tips. But scientists still have an incomplete understanding of how neurons receive and integrate inputs from several guidance cues at once, or how their responsiveness to certain factors changes over time.

“For example, commissural neurons are able to get to the midline because they are attracted there by certain factors, including Netrins,” Tessier-Lavigne says. “But once they’ve crossed the midline, they need to move on, and to do so the neurons somehow switch off their sensitivity to the attractants. At the same time, the neurons become sensitive to repelling factors in the midline, such as Slits. This prevents them from backtracking and helps them move forward.”

Focusing on the Robo3 receptor

From previous work, the researchers knew that a receptor protein called Robo3 is a key controller of the switch in which commissural neurons are initially attracted to the midline and then begin to avoid it. They also knew that it did so by boosting the action of attractants (Netrins) and blocking the action of repellents (Slits).

In the current study, which began while Tessier-Lavigne and Jaworski were at Genentech and was continued at Rockefeller, the researchers made the unexpected discovery that Robo3 has a third action that dovetails with the first two. By biochemically isolating proteins that bind to Robo3 from a vast pool of cell-secreted factors, they found that a protein called NELL2 binds to Robo3. In a series of mouse experiments, they were able to show that NELL2 is present in the developing spinal cord and directs the paths of commissural axons through repulsion by activating Robo3 receptors.

“We found that NELL2 is an axon-repulsion factor that helps the axon get to the midline,” Tessier-Lavigne says. “The Robo3 receptor therefore receives and coordinates input from not one but at least three diverse signaling molecules — NELL2, Netrins, and Slits — to fine tune an axon’s journey across and away from the midline.”

The findings not only shed new light on the biology of axon guidance in a general sense, but could also help scientists understand what goes wrong in a rare disease called horizontal gaze palsy with progressive scoliosis, which has been linked to mutations in the gene that codes for Robo3. People affected by the condition often suffer from abnormal spine curvature, and are unable to move their eyes horizontally from side to side — complications that arise early in development when commissural axons fail to cross the midline.

About this neuroscience and genetics research

Tessier-Lavigne and Jaworski conducted the research together with collaborators at Brown University and Genentech.

Axon pathfinding is orchestrated by numerous guidance cues, including Slits and their Robo receptors, but it remains unclear how information from multiple cues is integrated or filtered. Robo3, a Robo family member, allows commissural axons to reach and cross the spinal cord midline by antagonizing Robo1/2–mediated repulsion from midline-expressed Slits and potentiating deleted in colorectal cancer (DCC)–mediated midline attraction to Netrin-1, but without binding either Slits or Netrins. We identified a secreted Robo3 ligand, neural epidermal growth factor-like-like 2 (NELL2), which repels mouse commissural axons through Robo3 and helps steer them to the midline. These findings identify NELL2 as an axon guidance cue and establish Robo3 as a multifunctional regulator of pathfinding that simultaneously mediates NELL2 repulsion, inhibits Slit repulsion, and facilitates Netrin attraction to achieve a common guidance purpose.