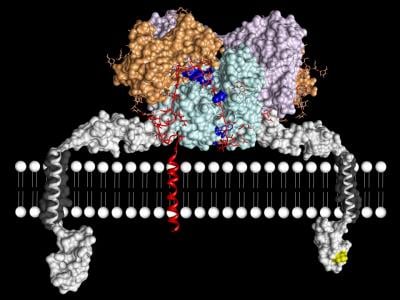 The enzyme meprin is located at the cell wall (lined-up white balls). The enzyme binds a protein (red) within its active site cleft (light blue) to cleave it. Image credit to Christoph Becker-Pauly and Xavier Gomis-Rüth.
Home
Featured

Research led by CSIC and Kiel University reveals the atomic-level structure of the human enzyme meprin.

An international research team led by the Spanish National Research Council (CSIC) and researchers from Kiel University revealed the atomic‐level structure of the human peptidase enzyme meprin β (beta). The study was published online in the journal Proceedings of the National Academy of Sciences.

“Now that we know how meprin β looks, how it works and how it relates to diseases, we can search for substances that stop its enzyme activities when they become harmful”, explains Xavier Gomis‐Rüth, researcher at the Molecular Biology Institute of Barcelona who led the project. Meprin β is an enzyme that is anchored in the outer wall of cells. Its normal function in the human metabolism is to cut off certain proteins, e.g. growth factors that are also anchored in the cell wall. In this way meprin β releases protein fragments into the environment surrounding the cells – a natural and normal process, as long as it occurs at certain intensity. However, under specific circumstances, meprin β may function abnormally, and for example, releases too many protein fragments. The protein pieces than overdo their natural task in the cell surroundings, causing disorder in the human body. Such disorder typically occurs when inflammation, cancer or Alzheimer’s Disease get started.

In their study, the scientists found out that meprin β consists of two identical molecules building a dimeric structure with a cleft in the middle. “We also discovered that the active site cleft is something like the scissor of the enzyme, the actual place where the proteins are cleaved”, explains Christoph Becker-Pauly, researcher at the Institute of Biochemistry at Kiel University and principle investigator of the Collaborative Research Center 877’s “Proteolysis as a Regulatory Event in Pathophysiology“.

Molecular biologist Gomes-Rüth points out to the next research goal: “We now need to find a substance that fits right into the cleft and will thus block the cleaving activity of meprin β.” Such a substance could be the key to new therapeutical drugs against inflammation, cancer or Alzheimer’s disease.

The research has been carried out in collaboration with scientists from Max Planck Institute for Biochemistry and Johannes Gutenberg University Mainz (Germany) as well as University of Bern (Switzerland).

Scientifically, meprin β belongs to the group of metalloproteases. “Meprin β is unique amongst all extracellular proteolytic enzymes, regarding its structure and cleavage specificity. With the help of proteomic techniques, we were recently able to identify the amyloid precursor protein (APP) as a substrate. It became obvious that meprin β is capable of releasing Aβ peptides, the main source of the typical amyloid plaques in Alzheimer brains, which is thought to be an initial step in the progression of Alzheimer’s Disease.”, adds Becker-Pauly.

He continues: “To solve the structure of the human enzyme in collaboration with Xavier Gomis-Rüth, we used insect cells, which yielded in high amounts of the recombinant protein and enabled the complex folding of meprin β. The structure does not only help to understand the molecular mechanism responsible for APP cleavage, but will also be employed to design highly specific and potent inhibitors, which might turn out as possible drugs for the treatment of neurodegenerative disorders or other diseases.”

Notes about this Alzheimer’s Disease research