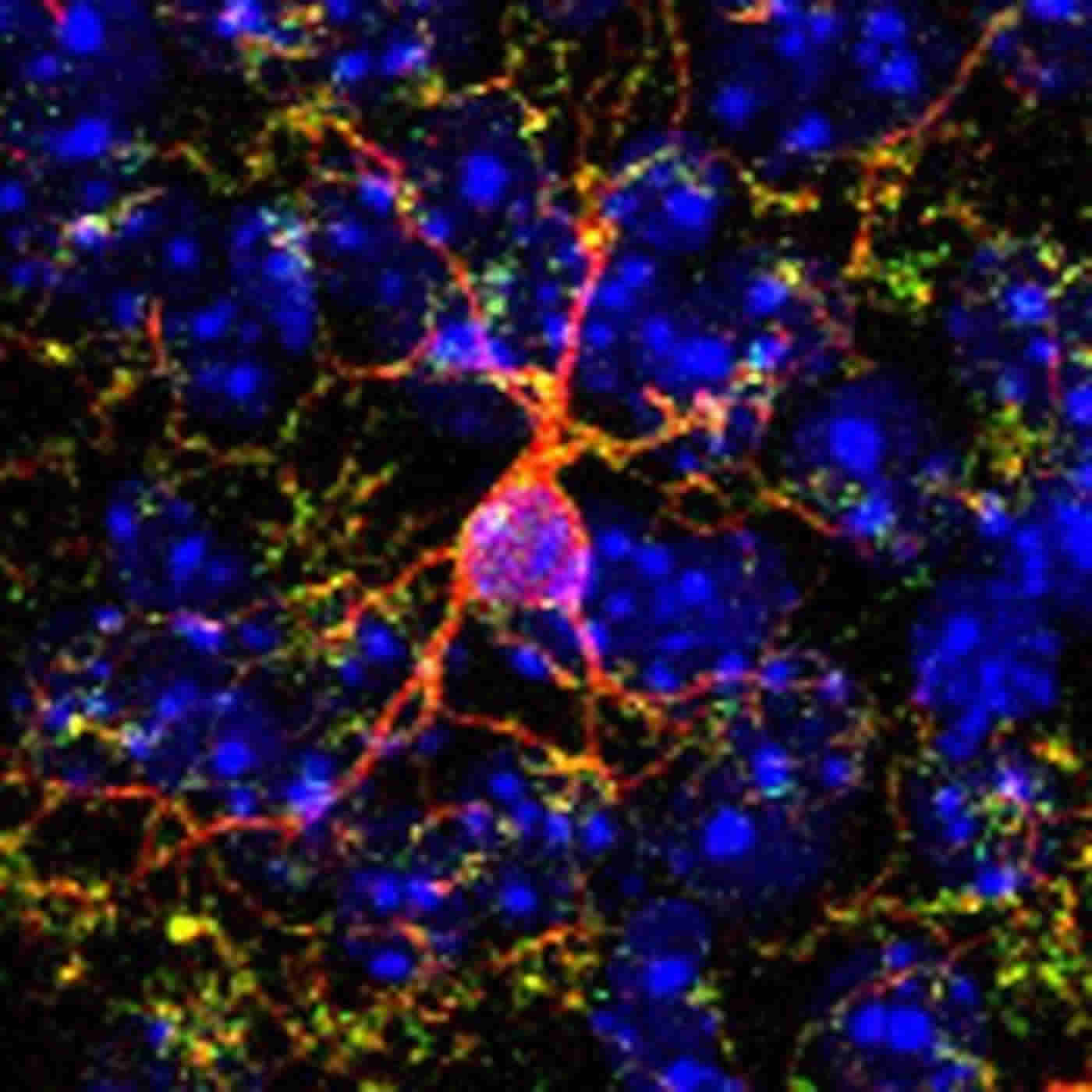 Single microglia cell in the brain. DNA in the cell body is labeled in blue, and in red and green are different proteins expressed only by microglia which show the elaborate processes of these cells. NeuroscienceNews image credit: MUHC.

Mechanism That Reduces Effect of Cocaine on the Brain Identified

Summary: A new study reports microglia can diminish the adverse changes to neural circuitry bought on by chronic cocaine use.

The finding offers hope for development of a new approach to prevent drug use relapses.

A type of brain cell known as microglia plays a key role in reducing the effects of cocaine in the brain, according to a major study by a team from the Research Institute of the McGill University Health Centre (RI-MUHC) in Montreal.

The discovery, published in the journal Neuron, establishes for the first time that microglia can diminish the adverse changes to neural circuitry brought on by the chronic use of cocaine and has significant implications for developing an effective treatment for addiction.

Microglia may not be as well known as neurons, the brain cells that relay messages, but they have many important functions. They constantly monitor their environment, and can act to maintain normal brain functioning. When they find something amiss, they can produce molecules that instruct neurons to make adaptive changes to their connections. One such example is the inflammatory molecule known as tumor necrosis factor (TNF).

“What we discovered is that cocaine activates these microglia, which causes the release of an inflammatory signal which then tries to reverse the changes that cocaine is inducing in the neurons,” says the study’s senior author, Dr. David Stellwagen, a researcher from the Brain Repair and Integrative Neuroscience at the RI-MUHC and associate professor in the Department of Neurology and Neurosurgery at McGill University.

Using a mouse model, researchers detected this microglia-mediated reversal by looking at how TNF acts on a particular set of synapses in the brain. “These connections are really important for regulating the behavior response in animal models to drugs of abuse such as cocaine,” says co-first author Sarah Konefal, a McGill PhD student in the Integrated Program in Neuroscience in Dr. Stellwagen’s lab.

The team found that TNF suppresses specific synaptic changes caused by cocaine-changes that are thought to underlie addiction. But Dr. Stellwagen explains that this beneficial mechanism doesn’t last. “The microglia response fades over time. One of the things that could transition somebody from just casual use into chronic dependency might be the fading of this adaptive signal which then allows the drugs to solidify their change to the neural circuitry.”

So can microglia be enticed to keep going? To find out, the team used a pharmaceutical agent that stimulates microglial production of TNF. Researchers observed that a cocaine-induced behavioral change in mice, the progressive increase in movement induced by cocaine,-was reduced in the animals who received this agent.

This exciting result holds promise for one day developing treatments that could cut down on drug relapse rates, which can run as high as 80 per cent. As Dr. Stellwagen puts it, “If we could develop a treatment that would suppress the craving that addicts have in stressful situations, or when they are re-exposed to situations in which they’d normally be taking the drug, that may allow them to avoid relapse. And that’s really the therapeutic goal of the work we have been doing.”

Dr. Stellwagen and colleagues are now investigating if the stimulated release of TNF can actually suppress cravings for cocaine. They are also hopeful that this work can be applied to other addictive substances including alcohol and methamphetamine.

Summary
Repeated administration of cocaine results in the development of behavioral sensitization, accompanied by a decrease in excitatory synaptic strength in the nucleus accumbens (NAc) through an unknown mechanism. Furthermore, glial cells in the NAc are activated by drugs of abuse, but the contribution of glia to the development of addictive behaviors is unknown. Tumor necrosis factor alpha (TNF-α), an inflammatory cytokine released by activated glia, can drive the internalization of synaptic AMPA receptors on striatal medium spiny neurons. Here we show that repeated administration of cocaine activates striatal microglia and induces TNF-α production, which in turn depresses glutamatergic synaptic strength in the NAc core and limits the development of behavioral sensitization. Critically, following a period of abstinence, a weak TLR4 agonist can reactivate microglia, increase TNF-α production, depress striatal synaptic strength, and suppress cocaine-induced sensitization. Thus, cytokine signaling from microglia can regulate both the induction and expression of drug-induced behaviors.