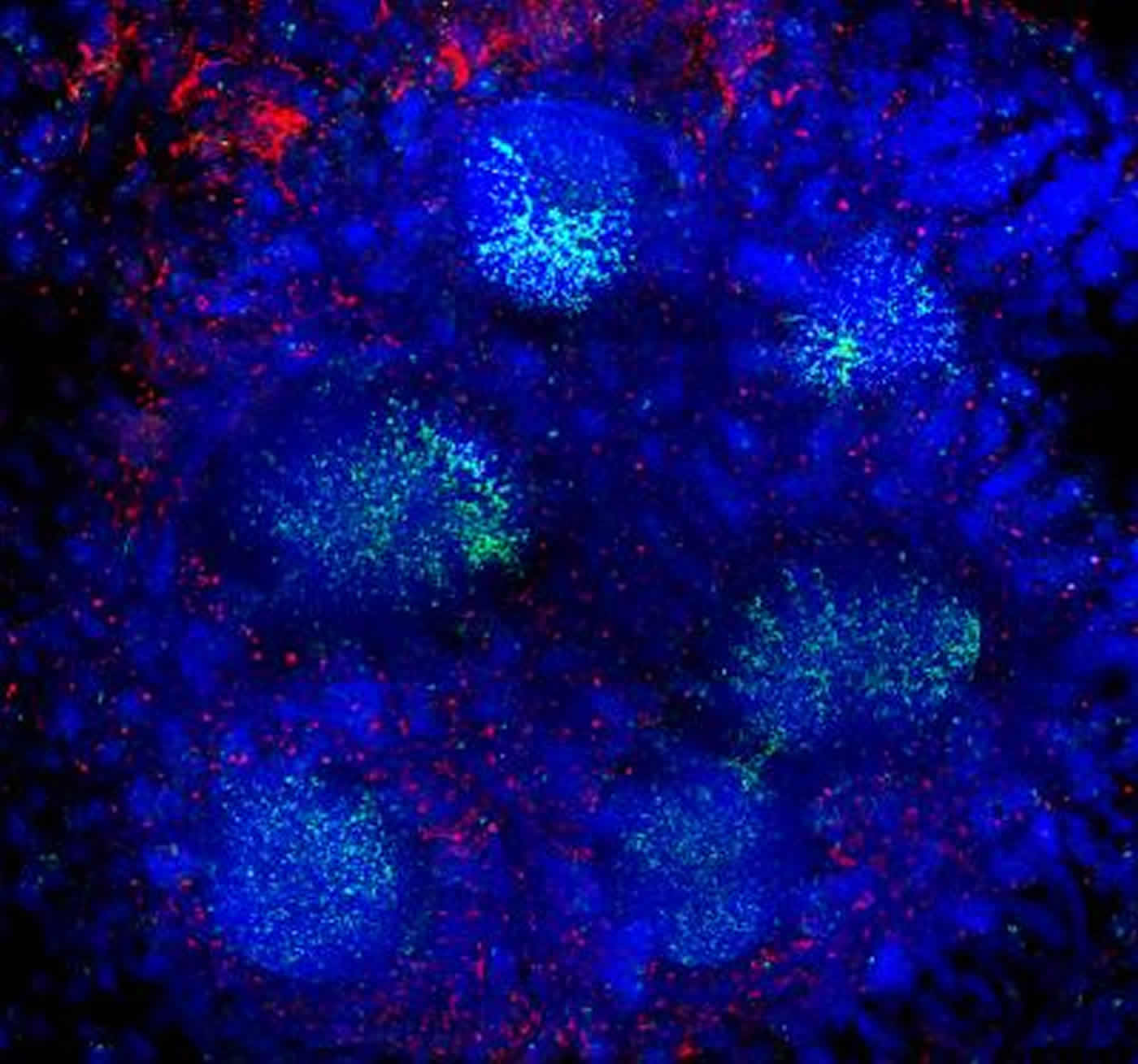 Infectious prion proteins use specialized cells (labelled green) to cross the lining of the gut and establish infection before spreading. NeuroscienceNews.com image is credited to Professor Neil Mabbott.

Summary: A new study reports M cells found in the lining of the gut can help to protect the against prion infections.

Fresh insights into infectious brain conditions help to explain why some people – and animals – are more at risk than others.

The study reveals how prion diseases – which include variant Creutzfeldt-Jakob disease (vCJD) in people and bovine spongiform encephalopathy (BSE) in cows – can infect the gut if contaminated meat has been eaten.

Specialised cells called M cells are key to whether or not the infection can take hold, the research in mice has found.

Researchers say factors that affect the abundance of M cells in the lining of the gut – such as inflammation, infection or ageing – could influence a person’s risk of contracting prion diseases after consuming infected food.

The team – led by the University of Edinburgh’s Roslin Institute – found that prions use M cells to enable them to infect the gut. Mice that do not have M cells are completely resistant to prion infections.

Those that have a greater number of M cells in the lining of their gut, however, were around ten times more susceptible.

The findings may part explain why most human cases have affected young people, who tend to have higher numbers of M cells in their guts than older people, the researchers say.

The research also suggests that the presence of other infections in the gut such as Salmonella may increase the chances of prions causing infection.

Prion diseases – also known as transmissible spongiform encephalopathies (TSEs) – are infectious brain conditions that affect people and animals. They are caused by abnormally shaped proteins which can be passed on by eating contaminated meat.

Previous research revealed that the proteins must first build up in specialised structures in the lining of the small intestine called Peyer’s patches before they are able to spread to the brain.

The diseases include vCJD in people, BSE in cows, scrapie in sheep and chronic wasting disease in deer. They cause extensive nerve and severe neurological symptoms including memory impairment, personality changes and difficulties with movement.

The research is published in the journal PLOS Pathogens. The Roslin Institute receives strategic funding from the Biotechnology and Biological Sciences Research Council.

Professor Neil Mabbott, who led the research at the University of Edinburgh’s Roslin Institute, said: “Our next step is to understand how the prions exploit these cells to infect the gut. If we can design treatments to block the uptake of prions by M cells, this may provide a novel method to prevent prion infections in humans and animals.”

Funding: The research was funded by the Biotechnology and Biological Sciences Research Council.

Many natural prion diseases of humans and animals are considered to be acquired through oral consumption of contaminated food or pasture. Determining the route by which prions establish host infection will identify the important factors that influence oral prion disease susceptibility and to which intervention strategies can be developed. After exposure, the early accumulation and replication of prions within small intestinal Peyer’s patches is essential for the efficient spread of disease to the brain. To replicate within Peyer’s patches, the prions must first cross the gut epithelium. M cells are specialised epithelial cells within the epithelia covering Peyer’s patches that transcytose particulate antigens and microorganisms. M cell-development is dependent upon RANKL-RANK-signalling, and mice in which RANK is deleted only in the gut epithelium completely lack M cells. In the specific absence of M cells in these mice, the accumulation of prions within Peyer’s patches and the spread of disease to the brain was blocked, demonstrating a critical role for M cells in the initial transfer of prions across the gut epithelium in order to establish host infection. Since pathogens, inflammatory stimuli and aging can modify M cell-density in the gut, these factors may also influence oral prion disease susceptibility. Mice were therefore treated with RANKL to enhance M cell density in the gut. We show that prion uptake from the gut lumen was enhanced in RANKL-treated mice, resulting in shortened survival times and increased disease susceptibility, equivalent to a 10-fold higher infectious titre of prions. Together these data demonstrate that M cells are the critical gatekeepers of oral prion infection, whose density in the gut epithelium directly limits or enhances disease susceptibility. Our data suggest that factors which alter M cell-density in the gut epithelium may be important risk factors which influence host susceptibility to orally acquired prion diseases.