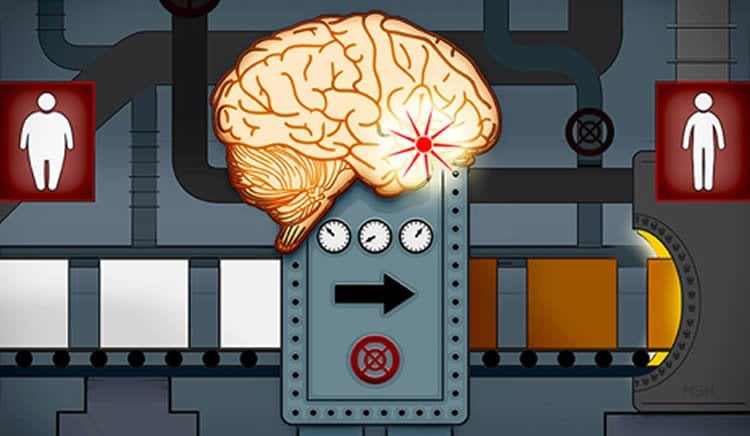 Researchers stimulated the 'browining' process from the brain in mice. They discovered it protected the mice from becoming obese on a high fat diet. Credit Michael S. Helfenbein.

Researchers at Yale School of Medicine have uncovered a molecular process in the brain known to control eating that transforms white fat into brown fat. This process impacts how much energy we burn and how much weight we can lose. The results are published in the Oct. 9 issue of the journal Cell.

Obesity is a rising global epidemic. Excess fatty tissue is a major risk factor for type 2 diabetes, cardiovascular disease, hypertension, neurological disorders, and cancer. People become overweight and obese when energy intake exceeds energy expenditure, and excess calories are stored in the adipose tissues. The adipose organ is made up of both white and brown fat. While white fat primarily stores energy as triglycerides, brown fat dissipates chemical energy as heat. The more brown fat you have, the more weight you can lose.

It has previously been shown that energy-storing white fat has the capacity to transform into energy-burning “brown-like” fat. In this new study, researchers from the Yale Program in Integrative Cell Signaling and Neurobiology of Metabolism, demonstrate that neurons controlling hunger and appetite in the brain control the “browning” of white fat.

The team stimulated this browning process from the brain in mice and found that it protected the animals from becoming obese on a high-fat diet. The team then studied the molecular changes in hunger-promoting neurons in the hypothalamus and found that the attachment of a unique sugar called “O-GlcNAc” to potassium ion channels acts as a switch to control brain activity to burn fat.

“Our studies reveal white fat “browning” as a highly dynamic physiological process that the brain controls,” said Yang. “This work indicates that behavioral modifications promoted by the brain could influence how the amount of food we eat and store in fat is burned.”

Yang said hunger and cold exposure are two life-history variables during the development and evolution of mammals. “We observed that food deprivation dominates over cold exposure in neural control of white fat browning. This regulatory system may be evolutionarily important as it can reduce heat production to maintain energy balance when we are hungry. Modulating this brain-to-fat connection represents a potential novel strategy to combat obesity and associated illnesses.”

How Squid and Octopus Get Their Big Brains