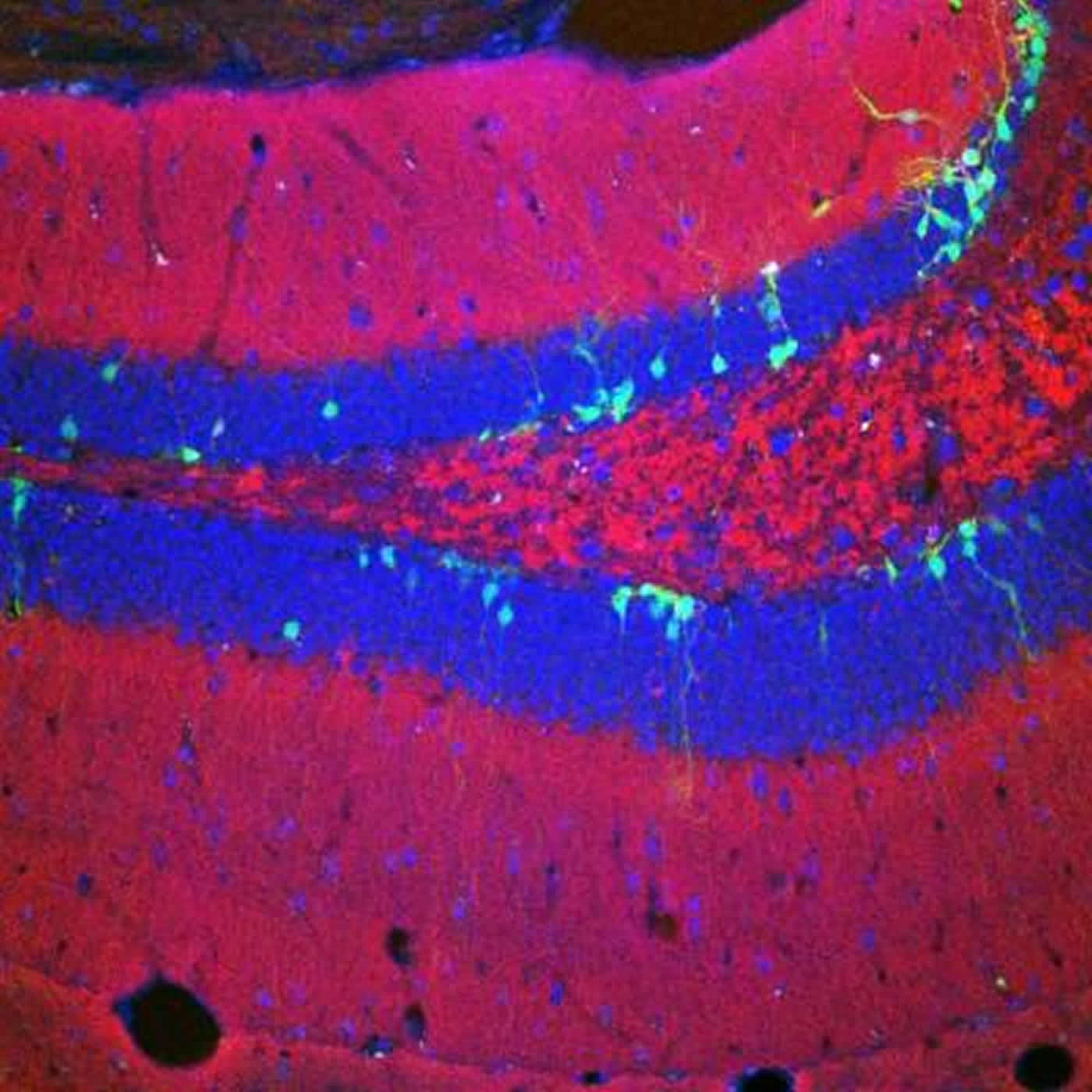 These are dentate gyrus from a mouse with GPR158 protein knocked down. NeuroscienceNews.com image is credited to Stylianos Kosmidis/Kandel lab/Columbia's Zuckerman Institute.

A Columbia study in mice has revealed new details of how a naturally occurring bone hormone reverses memory loss in the aging brain. These findings about the hormone, called osteocalcin, stand to spur further investigations into the molecular machinery that underlies memory — and how that machinery can be manipulated to improve it. The research also lends new insight into how lifestyle changes that affect the body, such as exercise, could positively affect the brain.

These findings were reported today by a team of Columbia researchers, led by Nobel laureate Eric R. Kandel, MD, in Cell Reports.

“Nearly everyone will experience age-related memory loss in their lifetimes, so it is incredibly important to understand its causes and identify ways to mitigate it,” said Dr. Kandel, who is University Professor and Kavli Professor of Brain Science, as well as codirector of Columbia’s Mortimer B. Zuckerman Mind Brain Behavior Institute. “With today’s study, we are not only building a detailed understanding of how age-related memory loss originates in the brain, we’ve shown how osteocalcin interacts with key proteins in the brain to boost memory.”

For many years, memory loss was treated as a singular disorder. Then scientists began to realize that not all forms of memory loss are created equal.

“Alzheimer’s disease begins in a part of the brain called the entorhinal cortex, which lies at the foot of the hippocampus,” said Dr. Kandel, who is also a senior investigator at the Howard Hughes Medical Institute. “Age-related memory loss, by contrast, begins within the hippocampus itself, in a region called the dentate gyrus.”

In 2013, Dr. Kandel and his team discovered another difference between the two disorders: A deficiency in the RbAp48 protein is a significant contributor to age-related memory loss but not Alzheimer’s. Research has shown that RbAp48 levels decline with age, both in mice and in people. This decline can be counteracted, the researchers found; when they artificially increased RbAp48 in the dentate gyrus of aging mice, the animals’ memories improved.

In 2017, the researchers found another way to improve the memories of mice. Working with Gerard Karsenty, MD, PhD, the Paul A. Marks Professor and Chair of Genetics and Development at Columbia University Irving Medical Center, the scientists found that infusions of osteocalcin, a hormone normally released by bone cells, had a positive effect on memory.

Today’s study connects osteocalcin and RbAp48, suggesting that the key driver of the memory improvements lay in the interplay between these molecules. In a series of molecular and behavioral experiments, the team found that RbAp48 controls the expression levels of BDNF and GPR158, two proteins regulated from osteocalcin. This chain of events appears to be critical; if RbAp48 function is inhibited, osteocalcin infusions have no effect on the animals’ memory. Osteocalcin needs RbAp48 to kick start the process.

This complex sequence of molecular signals is entirely different from those associated with Alzheimer’s disease. “This is the clearest evidence yet that age-related memory loss and Alzheimer’s are distinct diseases,” said Dr. Kandel.

After 40 Years of Decline, Stroke Death Rates Are Rising Again

These findings also provide further evidence in favor of what may be the best way to stave off, or even treat, age-related memory loss in people: exercise. Studies in mice by Dr. Karsenty’s team have shown that moderate exercise, such as walking, triggers the release of osteocalcin in the body. Dr. Kandel proposes that, over time, osteocalcin may make its way to the brain, where it encounters RbAp48. Eventually, this could have a long-term, positive effect on memory and the brain.

“This notion points to another line of inquiry that we’re eager to explore, which is how does the aging body act on the aging brain, and how can it be reversed?” said Dr. Kandel, “Our latest findings are almost certainly not the whole story. They are just the beginning.”

Funding: This research was supported by the Howard Hughes Medical Institute.