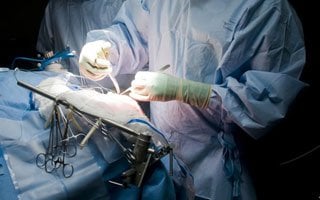 Dr. Nitin Tandon, University of Texas Health Science Center, operating to place electrodes on the brain of a patient. The electrodes record electrical activity in the brain and can be used to both monitor seizures and for research into memory by Arne Ekstrom at the UC Davis Center for Neuroscience. The image is credited to Nitin Tandon.
Home
Featured

Working with patients with electrodes implanted in their brains, researchers at the University of California, Davis, and The University of Texas Health Science Center at Houston (UTHealth) have shown for the first time that areas of the brain work together at the same time to recall memories. The unique approach promises new insights into how we remember details of time and place.

“Previous work has focused on one region of the brain at a time,” said Arne Ekstrom, assistant professor at the UC Davis Center for Neuroscience. “Our results show that memory recall involves simultaneous activity across brain regions.” Ekstrom is senior author of a paper describing the work published Jan. 27 in the journal Nature Neuroscience.

To pinpoint the origin of the seizures in these patients, Tandon and his team place electrodes on the patient’s brain inside the skull. The electrodes remain in place for one to two weeks for monitoring.

Six such patients volunteered for Ekstrom and Watrous’ study while the electrodes were in place. Using a laptop computer, the patients learned to navigate a route through a virtual streetscape, picking up passengers and taking them to specific places. Later, they were asked to recall the routes from memory.

Correct memory recall was associated with increased activity across multiple connected brain regions at the same time, Ekstrom said, rather than activity in one region followed by another.

However, the analysis did show that the medial temporal lobe is an important hub of the memory network, confirming earlier studies, he said.

Intriguingly, memories of time and of place were associated with different frequencies of brain activity across the network. For example, recalling, “What shop is next to the donut shop?” set off a different frequency of activity from recalling “Where was I at 11 a.m.?”

Using different frequencies could explain how the brain codes and recalls elements of past events such as time and location at the same time, Ekstrom said.

The researchers hope to explore further how the brain codes information in future work.

The neuroscientists analyzed their results with graph theory, a new technique that is being used for studying networks, ranging from social media connections to airline schedules.

True Grit: Keeping the Faith, or Willingness to Push Yourself, as You Age

“Previously, we didn’t have enough data from different brain regions to use graph theory. This combination of multiple readings during memory retrieval and graph theory is unique,” Ekstrom said.

Placing electrodes inside the skull provides clearer resolution of electrical signals than external electrodes, making the data invaluable for the study of cognitive functions, Tandon said. “This work has yielded important insights into the normal mechanisms underpinning recall, and provides us with a framework for the study of memory dysfunction in the future.”

Additional authors of the study are Chris Connor and Thomas Pieters at the UTHealth Medical School. The work was supported by the Sloan Foundation, the Hellman Foundation and the NIH.