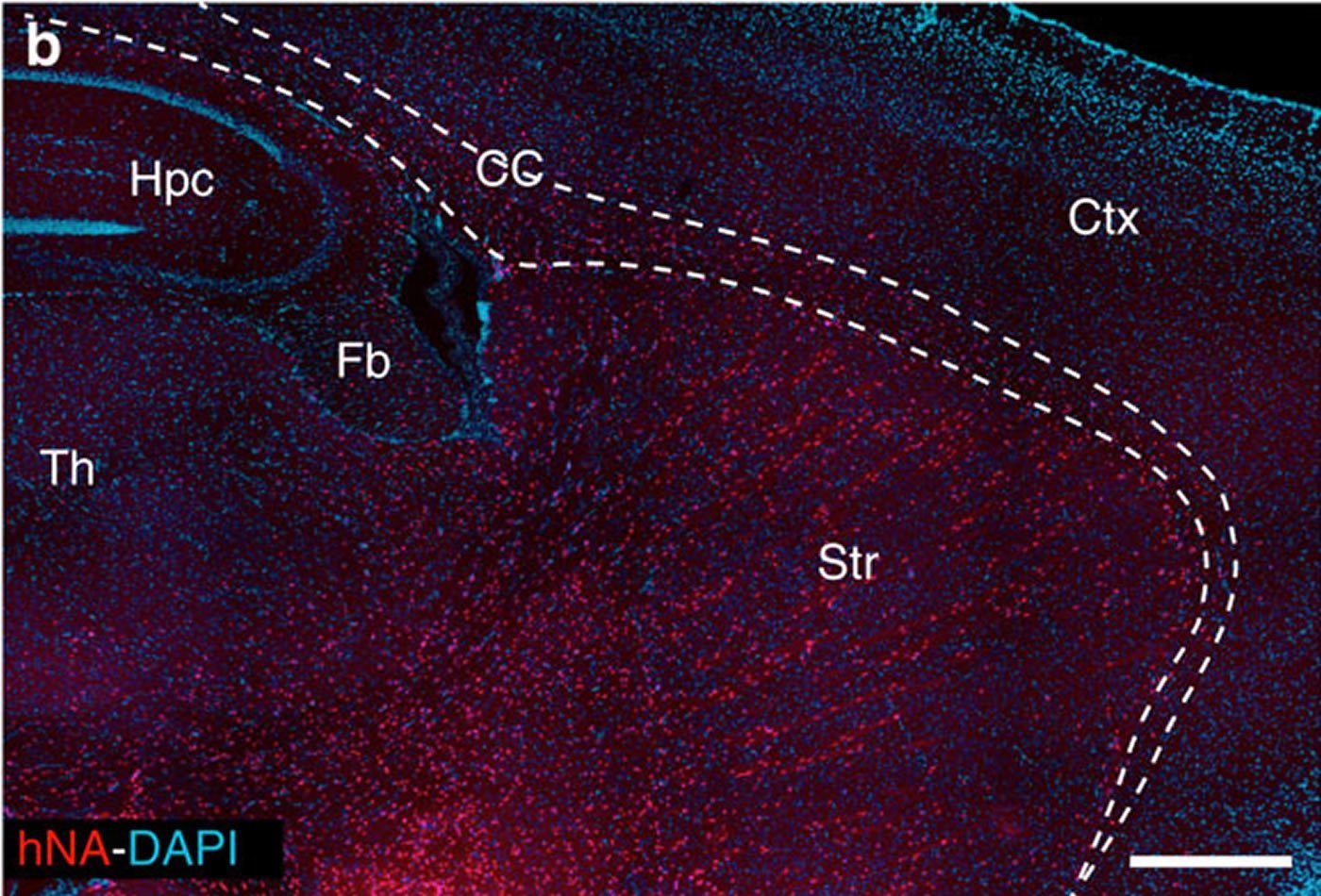 Fetal derived cells expanded to colonize the striata and ventral forebrain of engrafted mice by 20 weeks. NeuroscienceNews.com image is credited to the researchers/Nature Communications.

Summary: By transplanting healthy glial cells, researchers have succeeded in reducing the symptoms and slowing the progression of Huntington’s disease in mice.

Researchers have successfully reduced the symptoms and slowed the progression of Huntington’s disease in mice using healthy human brain cells. The findings, which were published today in the journal Nature Communications, could ultimately point to a new method to treat the disease.

The research entailed implanting the animals with human glia cells derived from stem cells. One of the roles of glia, an important support cell found in the brain, is to tend to the health of neurons and the study’s findings show that replacing sick mouse glia with healthy human cells blunted the progress of the disease and rescued nerve cells at risk of death.

“The role that glia cells play in the progression of Huntington’s disease has never really been explored,” said Steve Goldman, M.D., Ph.D., co-director of the University of Rochester Center for Translational Neuromedicine. “This study shows that these cells are not only important actors in the disease, but may also hold the key to new treatment strategies.”

Huntington’s is a hereditary neurodegenerative disease that is most closely characterized by the loss of a specific nerve cell in the brain that plays a critical role in motor control called the medium spiny neurons. Over time, the disease results in involuntary movements, problems with coordination, and cognitive decline and depression. There is currently no way to slow or modify this fatal disease.

Most of the damage in Huntington’s disease occurs in a region of the brain called the striatum. Researchers have observed that as medium spiny neurons in the striatum die as a result of the disease, and that neighboring glial cells called astrocytes also become sick and do not function properly. However, it had not been clear if the sick astrocytes contributed to the signs and symptoms of the disease.

The researchers conducted a series of experiments in which they isolated human glial progenitors – the cells in the central nervous system that give rise to astrocytes – from both embryonic stem cells and brain tissue and implanted the cells into the striatum of mice with Huntington’s disease. Consistent with prior studies, they observed that the resulting human astrocytes outcompeted the native glia cells, resulting in mice with native neurons but human glia.

Conversely, when healthy mice were implanted with human glia carrying the genetic mutation that causes Huntington’s, the animals exhibited symptoms of the disease.

The researchers believe that the healthy human glia were able to essentially stabilize and perhaps even rescue neurons by restoring the normal signaling function that is lost during the disease. A complex series of chemical interactions must transpire when nerve cells fire and communicate with their neighbors. This activity requires neurons to constantly adjust and rebalance concentrations of important chemicals such as potassium, which participates in neuronal firing. Medium spiny neurons become overexcited in Huntington’s disease due to a genetic flaw that prevents potassium from entering the cells in sufficient amount – a condition that gives rise to the motor control and cognitive symptoms of the disease and produces a toxic chain reaction that ultimately kills the nerve cells.

One of the roles of astrocytes is to function like a sponge and absorb potassium from the space surrounding neurons and create an environment that prevents neurons from becoming overactive. However, this function is impaired in glia in Huntington’s disease. The scientists found that the transplanted healthy glia were able to reestablish normal potassium uptake and thereby restore normal neuronal activity and rescue cells that might have otherwise died from hyper-excitability.

Because glia cells have been shown to migrate and proliferate throughout the brain once implanted, these findings could herald a potential new approach to rescue nerve cells threatened by the disease.

“The partial rescue of deficiencies we observed in this study tells us that there is a significant glia component in Huntington’s disease and that we may be able to improve function and delay progression with glial transplants,” said Goldman.