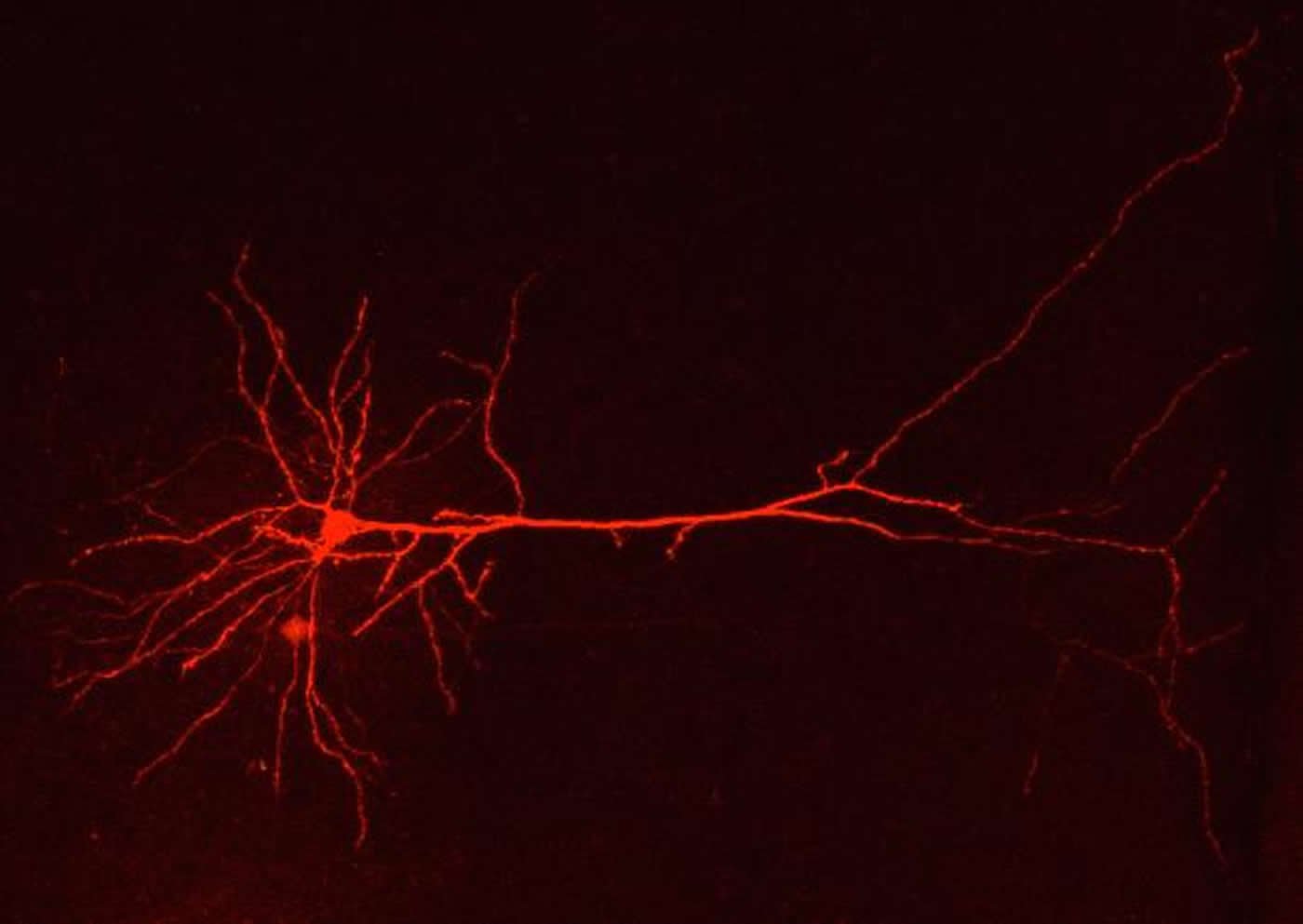 Morphological reconstruction of a neuron of the cingulate cortex in a migraine episode. Image is credited to UZH.

Migraine is one of the most disabling disorders, affecting one in seven people and causing a tremendous social and economic burden. Several findings suggest that migraine is a disease affecting a large part of the central nervous system and characterized by a global dysfunction in sensory information processing and integration, which also occurs between migraine episodes (interictal period). For example, patients with migraine exhibit increased cortical responses to sensory stimuli during the interictal period. At present, the cellular mechanisms responsible for these alterations are largely unknown.

Malfunction of astrocytes in the cingulate cortex

A team of neuroscientists led by Mirko Santello at the Institute of Pharmacology and Toxicology of the University of Zurich, in collaboration with the University of Padua, has identified a new mechanism implicated in a special form of migraine caused by genetic mutation. They report that this familial hemiplegic migraine type 2 (FHM2) causes a malfunction of astrocytes in the cingulate cortex, a brain region that is involved in the feeling of pain. Astrocytes, specific star-shaped brain cells, are essential contributors to neuronal function and have a strong impact on brain circuits and behavior.

“Despite their abundance, astrocytes have been relatively overlooked by neuroscientists,” says Mirko Santello, last author of the study. Yet these cells are extremely important to clear transmitters released by neurons. In their study the researchers were able to show that in familial migraine the astrocytes cannot remove excessive transmitters released by neurons. “The impairment in astrocytic glutamate uptake in the cingulate cortex strongly enhances cortical dendritic excitability and thus enhances firing of the neurons,” Santello says.

Furthermore, the study reported that the malfunction of the cingulate cortex also influences migraine occurrence. In a mouse model the researchers showed that the mice displayed increased sensitivity to head pain triggers. “By manipulating astrocytes in the cingulate cortex, we were able to reverse their dysfunction. This prevented an increase in head pain in mice carrying the genetic defect,” says Jennifer Romanos, first author of the study.

Migraine is a complicated disorder that affects part of the nervous system. “Our results provide a clear example of how astrocyte dysfunction produced by a genetic defect affects neuronal activity and sensitivity to head pain triggers,” explains Mirko Santello. The findings help to better understand migraine pathophysiology and suggest that the cingulate cortex may represent a critical hub in the disease. The demonstration of the link between dysfunction of astrocytes in the cingulate cortex and familial migraine could help in devising new migraine treatment strategies.

How the Female Brain Responds to Genital Touch

Astrocytes are essential contributors to neuronal function. As a consequence, disturbed astrocyte-neuron interactions are involved in the pathophysiology of several neurological disorders, with a strong impact on brain circuits and behavior. Here, we describe altered cortical physiology in a genetic mouse model of familial hemiplegic migraine type 2 (FHM2), with reduced expression of astrocytic Na+,K+-ATPases. We used whole-cell electrophysiology, two-photon microscopy, and astrocyte gene rescue to demonstrate that an impairment in astrocytic glutamate uptake promotes NMDA spike generation in dendrites of cingulate cortex pyramidal neurons and enhances output firing of these neurons. Astrocyte compensation of the defective ATPase in the cingulate cortex rescued glutamate uptake, prevented abnormal NMDA spikes, and reduced sensitivity to cranial pain triggers. Together, our results demonstrate that impaired astrocyte function alters neuronal activity in the cingulate cortex and facilitates migraine-like cranial pain states in a mouse model of migraine.