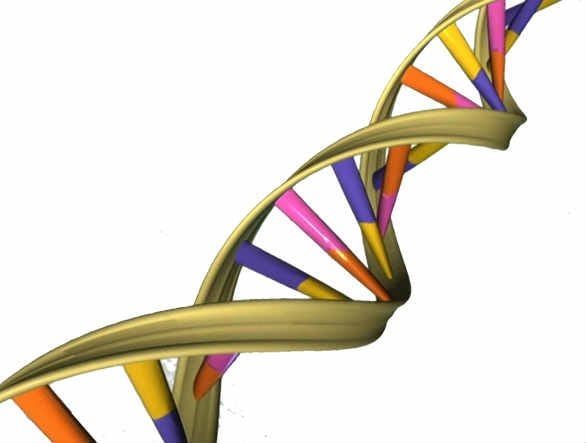 Williams syndrome is caused by the deletion of one of the two usual copies of approximately 25 genes from chromosome 7, resulting in mental impairment. This illustrative image shows a DNA double helix. Credit given below.
Home
Featured

Establishing links between genes, the brain and human behavior is a central issue in cognitive neuroscience research, but studying how genes influence cognitive abilities and behavior as the brain develops from childhood to adulthood has proven difficult.

Now, an international team of scientists has made inroads to understanding how genes influence brain structure and cognitive abilities and how neural circuits produce language.

The team studied individuals with a rare disorder known as Williams syndrome. By measuring neural activity in the brain associated with the distinct language skills and facial recognition abilities that are typical of the syndrome, they showed that Williams is due not to a single gene but to distinct subsets of genes, hinting that the syndrome is more complex than originally thought.

“Solutions to understanding the connections between genes, neural circuits and behavior are now emerging from a unique union of genetics and neuroscience,” says Julie Korenberg, a University of Utah professor and an adjunct professor at the Salk Institute, who led the genetics aspects on the new study.

The study was led by Debra Mills, a professor of cognitive neuroscience at Bangor University in Wales. Ursula Bellugi, a professor at the Salk Institute for Biological Studies in La Jolla, was also integrally involved in the research.

Korenberg was convinced that with Mills’ approach of directly measuring the brain’s electrical firing they could solve the puzzle of precisely which genes were responsible for building the brain wiring underlying the different reaction to human faces in Williams syndrome.

“We also discovered,” says Mills, “that in those with Williams syndrome, the brain processes language and faces abnormally from early childhood through middle age. This was a surprise because previous studies had suggested that part of the Williams brain functions normally in adulthood, with little understanding about how it developed.”

The results of the study were published November 12, 2013 in Developmental Neuropsychology.

Williams syndrome is caused by the deletion of one of the two usual copies of approximately 25 genes from chromosome 7, resulting in mental impairment. Nearly everyone with the condition is missing these same genes, although a few rare individuals retain one or more genes that most people with Williams have lost. Korenberg was the early pioneer of studying these individuals with partial gene deletions as a way of gathering clues to the specific function of those genes and gene networks. The syndrome affects approximately 1 in 10,000 people around the world, including an estimated 20,000 to 30,000 individuals in the United States.

Although individuals with Williams experience developmental delays and learning disabilities, they are exceptionally sociable and possess remarkable verbal abilities and facial recognition skills in relation to their lower IQ. Bellugi has long observed that sociability also seems to drive language and has spent much of her career studying those with Williams syndrome.

“Williams offers us a window into how the brain works at many different levels,” says Bellugi. “We have the tools to measure the different cognitive abilities associated with the syndrome, and thanks to Julie and Debbie we are now able to combine this with studies of the underlying genetic and neurological aspects.”

Suspecting that specific genes might lie at the origins of brain plasticity, functional changes in the brain that occur with new knowledge or experiences, and that these genes might be linked to the unusual proficiencies of those with Williams, the team enrolled individuals of various ages in their study. They drew from children, adolescents and adults who all had the full genetic deletion for Williams syndrome and compared them with their non-affected peers. Their study is additionally significant for being one of the first to examine the brain structure and its functioning in children with Williams. And, as Korenberg predicted, a critical piece of the puzzle came from including in their study two adults with partial genetic deletions for Williams.

Using highly sensitive sensors to measure brain activity, the researchers, led by Mills, presented their study participants with both visual and auditory stimuli in the form of unfamiliar faces and spoken sentences. They charted the small changes in voltage generated by the areas of the brain responding to these stimuli, a process known as event-related potentials (ERPs). Mills was the first to publish studies on Williams syndrome using ERPs, developed the ERP markers for this study, and oversaw its design and analysis.

Mills identified ERP markers of brain plasticity in Williams syndrome in children and adults of varying ages and developmental stages. These findings are important because the brains of people with Williams are structured differently than those of people without the syndrome. In the Williams brain, the dorsal areas (along the back and top), which help control vision and spatial understanding, are undersized. The ventral areas (at the front and the bottom), which influence language, facial recognition, emotion and social drive, are relatively normal in size.

It was previously believed that in individuals with Williams, the ventral portion of the brain operated normally. What the team discovered, however, was that this area of the brain also processed information differently than those without the syndrome, and did so throughout development, from childhood to the adult years. This suggests that the brain was compensating in order to analyze information; in other words, it was exhibiting plasticity. Of additional importance, the distinct ERP markers identified by Mills are so characteristic of the different brain organization in Williams that this information alone is approximately 90 percent accurate when analyzing brain activity to identify someone with Williams syndrome.

Other key findings of the study resulted from comparing the ERPs of participants with full Williams deletion with those with partial genetic deletions. While psychological tests focused on facial recognition show no difference between these groups, the scientists found differences in these recognition abilities on the ERP measurements, which look directly at neural activity. Thus, the scientists were able to see how very slight genetic differences affected brain activity, which will allow them identify the roles of sub-sets of Williams genes in brain development and in adult facial recognition abilities.

By combining these one-in-a-million people with tools capable of directly measuring brain activity, the scientists now have the unprecedented opportunity to study the genetic underpinnings of mental disorders. The results of this study not only advance science’s understanding of the links between genes, the brain and behavior, but may lead to new insight into such disorders as autism, Down syndrome and schizophrenia.

“By greatly narrowing the specific genes involved in social disorders, our findings will help uncover targets for treatment and provide measures by which these and other treatments are successful in alleviating the desperation of autism, anxiety and other disorders,” says Korenberg.

Notes about this neurogenetics and neurobehavior research