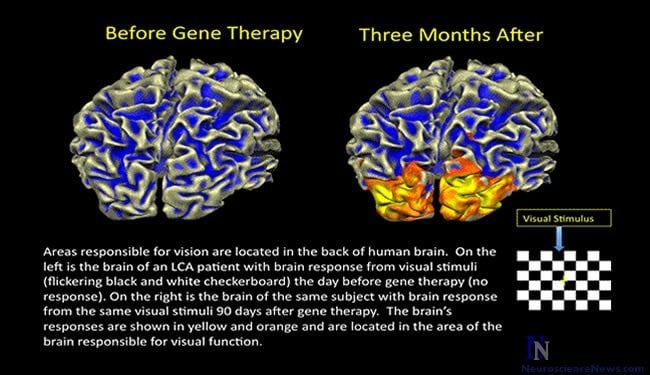 Gene Therapy for Inherited Blindness Succeeds in Patients’ Other Eye

Gene therapy for congenital blindness has taken another step forward, as researchers further improved vision in three adult patients previously treated in one eye. After receiving the same treatment in their other eye, the patients became better able to see in dim light, and two were able to navigate obstacles in low-light situations. No adverse effects occurred.

Neither the first treatment nor the readministered treatment triggered an immune reaction that cancelled the benefits of the inserted genes, as has occurred in human trials of gene therapy for other diseases. The current research targeted Leber congenital amaurosis (LCA), a retinal disease that progresses to total blindness by adulthood.

Scientists from the Perelman School of Medicine at the University of Pennsylvania and The Children’s Hospital of Philadelphia led the study, published today in Science Translational Medicine.

“Patients have told us how their lives have changed since receiving gene therapy,” said study co-leader Jean Bennett, M.D., Ph.D., F.M. Kirby professor of Ophthalmology at Penn. “They are able to walk around at night, go shopping for groceries and recognize people’s faces—all things they couldn’t do before. At the same time, we were able to objectively measure improvements in light sensitivity, side vision and other visual functions.”

Other objective results came from brain signals seen in neuroimaging. When a dimly flickering checkerboard pattern flashed in front of a patient’s recently treated eye, an area in the brain responsible for vision lit up during functional magnetic resonance imaging (fMRI). “This finding is telling us that the brain is responding to the eye’s sensitivity to dim light,” said radiology researcher Manzar Ashtari, Ph.D., of The Children’s Hospital of Philadelphia, the study’s co-leader.

LCA is a group of hereditary retinal diseases in which a gene mutation impairs production of an enzyme essential to light receptors in the retina. The study team injected patients with a vector, a genetically engineered adeno-associated virus, which carried a normal version of a gene called RPE65 that is mutated in one form of LCA.

The researchers in the current study previously carried out a clinical trial of this gene therapy in 12 patients with LCA, four of them children aged 11 and younger when they were treated. Exercising caution, the researchers treated only one eye—the one with worse vision. This trial, reported in October of 2009, achieved sustained and notable results, with six subjects improving enough to no longer be classified as legally blind.

The Center for Cellular and Molecular Therapeutics (CCMT) at The Children’s Hospital of Philadelphia sponsored both the initial clinical trial and the current study, and manufactured the vector used to carry the corrective gene. Katherine A. High, M.D., a co-author of both studies, is the director of the CCMT, and a pioneering gene therapy researcher.

“Our concern was that the first treatment might cause a vaccine-like immune response that could prime the individual’s immune system to react against a repeat exposure,” said Bennett. Because the eye is “immune-privileged” —relatively isolated from the body’s immune system—such a response was considered less likely than in other parts of the body, but the idea needed to be tested in practice.

As in the first study, retina specialist Albert M. Maguire, M.D., a study co-author and professor of Opthalmology at Penn, injected the vector into the untreated eyes of the three subjects at The Children’s Hospital of Philadelphia. The patients had been treated one and a half to three years previously.

The researchers continued to follow the three patients for six months after readministration. They found the most significant improvements were in light sensitivity, such as the pupil’s response to light over a range of intensities. Two of the three subjects were able to navigate an obstacle course in dim light, as captured in videos that accompanied the published study.

There were no safety problems and no significant immune responses. There was even an unexpected benefit—the fMRI results showed improved brain responses not just in the newly injected eye, but in the first one as well, possibly because the eyes were better able to coordinate with each other in fixating on objects.

The researchers caution that follow-up studies must be done over a longer period and with additional subjects before they can definitively state that readministering gene therapy for retinal disease is safe in humans. However, said Bennett, the findings bode well for treating the second eye in the remaining patients from the first trial—including children, who may have better results because their retinas have not degenerated as much as those of the adults.

Notes about this gene therapy and blindness research article

Funding support for this study came from the CCMT, the Foundation Fighting Blindness, the National Institutes of Health (National Center for Research Resources grants UL1-RR-024134, IR21EY020662, and 1R01EY019014-01A2), Research to Prevent Blindness, Hope for Vision, the Paul and Evanina Mackall Foundation Trust at the Scheie Eye Institute, anonymous donors, the Italian Telethon Foundation, and the F.M. Kirby Foundation. Dr. High is an Investigator of the Howard Hughes Medical Institute, which also provided support.