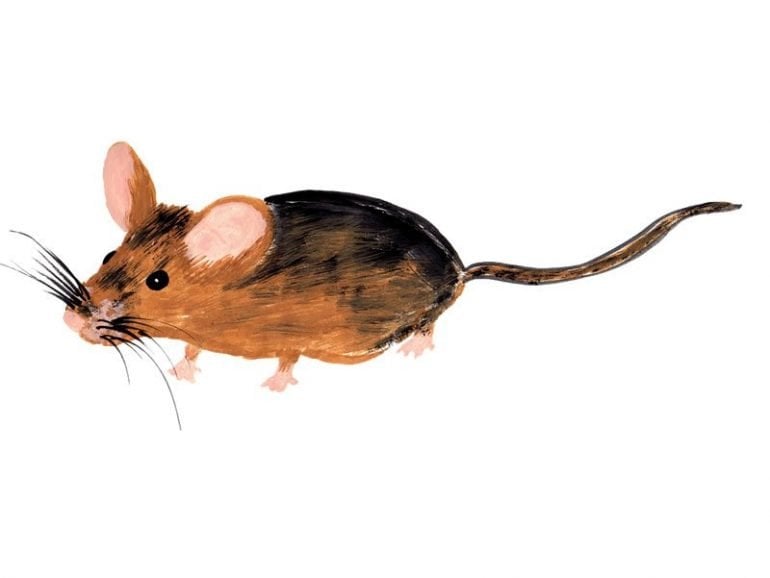 The researchers also identified a molecular pathway involved in turning back the clock on the cells. Drugs that manipulate the pathway might be an effective substitute for exercise, they suggest. The image is in the public domain.

A nightly jaunt on the exercise wheel enhances muscle-repair capabilities in old mice, according to a new study by researchers at Stanford School of Medicine.

Only older mice saw this benefit, which the researchers found is due to the rejuvenation of the animals’ muscle stem cells.

“The effect in old animals is very significant,” said Thomas Rando, MD, PhD, professor of neurology and neurological sciences and director of Stanford’s Glenn Center for the Biology of Aging. “We found that regular exercise restores youthfulness to tissue repair. Their muscle stem cells start to look and behave like those of much younger animals.”

The researchers also identified a molecular pathway involved in turning back the clock on the cells. Drugs that manipulate the pathway might be an effective substitute for exercise, they suggest.

Rando is the senior author of the study, which will be published April 13 in Nature Metabolism. Medical student Jamie Brett, PhD, postdoctoral scholar Marina Arjona, PhD, and visiting scholar Mika Ikeda, PhD, are the lead authors.

Unlike embryonic or induced pluripotent stem cells, which can give rise to any tissue in the body, tissue-specific stem cells are restricted in their potential. Muscle stem cells wait in the wings along the muscle fibers in a resting state known as quiescence until called upon to repair damage.

“Studies conducted by us and others have shown that tissue regeneration decreases with age, and that this is due to declining function in adult stem cells,” Rando said. “Many researchers are looking for a way to restore youthfulness.”

While no researchers have discovered a reliable fountain of youth, it’s well known that certain lifestyle adjustments can be beneficial.

“Exercise is known to reduce the risk of a wide variety of age-related problems, including cardiovascular disease, cancer and perhaps even Alzheimer’s disease,” Rando said. “There’s a lot of interest in understanding how exercise confers these health benefits.”

In particular, the researchers wanted to know whether and how voluntary exercise affects the function of muscle stem cells in mice. They gave mice that were about 20 months old, the equivalent of being 60-70 years old in humans, and mice that were 3 to 4 months old, the equivalent of 20- to 30-year-old humans, access to an exercise wheel and allowed them to run at will. Young mice averaged about 10 kilometers each night, and the older mice covered about 5 kilometers. Two other groups of young and old mice were given wheels that didn’t rotate to serve as controls.

“The animals were exercising at the intensity levels at which they were comfortable,” Rando said, “much like what people do for their own health. This is a less stressful situation than resistance training or intense endurance exercise, which may themselves affect muscle stem cell function.” Subsequent analysis showed that the muscle stem cells of the exercising animals remained quiescent, and that the animals did not develop significant numbers of new muscle fibers in response to the exercise.

After three weeks of nightly aerobics for the active groups, the researchers compared the ability of the animals to repair muscle damage. They found that, as expected, the aged, sedentary mice were significantly less able to repair muscle damage than younger sedentary mice. However, the older animals that had exercised regularly were significantly better at repairing muscle damage than were their counterparts that did not exercise. This exercise benefit was not observed in the younger animals.

Similar results were obtained when muscle stem cells from older mice that had exercised were transplanted into younger mice. The stem cells from the exercising animals contributed more to the repair process than did those from their sedentary peers.

The researchers also showed that injecting blood from an old mouse that had exercised into an old mouse that hadn’t conferred a similar benefit in stem cell function, suggesting that exercise simulates the production of some factors that then circulate in the blood and enhance the function of older stem cells.

“That’s really fascinating,” Rando said, noting that the result mirrors those from earlier studies jointly conducted by him and Tony Wyss-Coray, PhD, a professor of neurology and neurological sciences at the School of Medicine, indicating that blood from a young mouse appears to somehow enhance the tissue-specific stem cells in an older animal.

Further studies indicated that the exercise-induced rejuvenation observed by the researchers could be mimicked by increasing the expression of a signaling molecule called cyclin D1, which is involved in rousing resting muscle stem cells in response to damage. The discovery suggests that it may one day be possible to artificially activate this pathway to keep aging muscle stem cells functioning at their youthful best.

“If we could develop a drug that mimics this effect, we may be able to experience the benefit without having to do months of exercise,” Rando said.

Funding: The research was supported by the Stanford’s Medical Science Training Program, the California Institute for Regenerative Medicine, the National Institutes of Health (grants TR01AG047820, P01AG036695, R37AG023806 and R01AR062185), the Glenn Foundation for Medical Research and the Department of Veterans Affairs.

Mindfulness Can Make You Selfish

Ageing impairs tissue repair. This defect is pronounced in skeletal muscle, whose regeneration by muscle stem cells (MuSCs) is robust in young-adult animals, but inefficient in older organisms. Despite this functional decline, old MuSCs are amenable to rejuvenation through strategies that improve the systemic milieu, such as heterochronic parabiosis. One such strategy, exercise, has long been appreciated for its benefits on healthspan, but its effects on aged stem-cell function in the context of tissue regeneration are incompletely understood. Here, we show that exercise in the form of voluntary wheel running accelerates muscle repair in old mice and improves old MuSC function. Through transcriptional profiling and genetic studies, we discovered that the restoration of old MuSC activation ability hinges on restoration of Cyclin D1, whose expression declines with age in MuSCs. Pharmacologic studies revealed that Cyclin D1 maintains MuSC activation capacity by repressing TGF-β signalling. Taken together, these studies demonstrate that voluntary exercise is a practicable intervention for old MuSC rejuvenation. Furthermore, this work highlights the distinct role of Cyclin D1 in stem-cell quiescence.