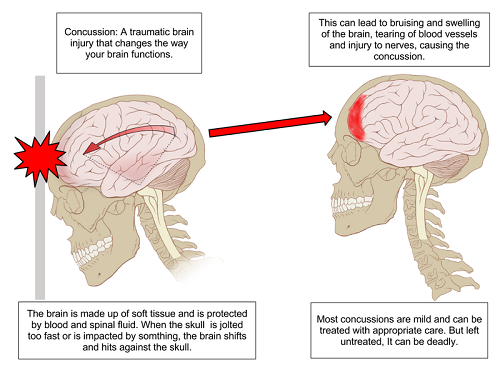 To study the effects of concussions, researchers had athletes perform specific visual and auditory tasks and also mapped their brains with the help of EEG and MRI equipment, in addition to testing brain chemistry. The research demonstrates that brain waves remain abnormal in young athletes for two years following a concussion, and atrophy occurs in the motor pathways of the brain following a hit. Credited to Max Andrews.
Home
Featured

As the National Football League braces for lawsuits by 4000 former players alleging the league failed to protect them from the long-term consequences of concussions, game-changing research by a leading Canadian researcher shows damage to the brain can persist for decades after the original head trauma.

“Even when you are symptom-free, your brain may still not be back to normal,” says Dr. Maryse Lassonde, a neuropsychologist and the scientific director of the Quebec Nature and Technologies Granting Agency.

Lassonde, whose work is supported by the Canada Foundation for Innovation, was a consultant with the Montreal Canadiens hockey team, treating players with concussions for 15 years. She simultaneously undertook research into the effects of concussions on children and young athletes as well as older athletes.

To study the effects of concussions, Lassonde had athletes perform specific visual and auditory tasks and also mapped their brains with the help of EEG and MRI equipment, in addition to testing brain chemistry.

Her research demonstrates that brain waves remain abnormal in young athletes for two years following a concussion, and atrophy occurs in the motor pathways of the brain following a hit.

The results of her work, which have been published in the journals Brain and Cerebral Cortex, have important implications for the regulation of amateur and professional sports, the treatment of players and the importance of preventing violence in hockey and football.

“That tells you that first of all, concussions lead to attention problems, which we can see using sophisticated techniques such as the EEG,” says Lassonde. “This may also lead to motor problems in young athletes.”

The long-term effects in older former athletes are even more persistent.

By studying older athletes who suffered their last concussion 30 years earlier, and comparing them to healthy peers who had not experienced concussions, Lassonde discovered those who had suffered a head trauma had memory and attention deficits and motor problems similar to the early symptoms of Parkinson’s disease. Further testing of these older athletes turned up a thinning of the cortex in the same regions of the brain that Alzheimer’s disease usually affects.

In addition to the recovery time required following a concussion, adds that young players who return to their sport too early and suffer a second concussion risk serious brain damage or death.

“If a child or any player has a concussion, they should be kept away from playing or doing any mental exercise until their symptoms abate,” Lassonde says. “Concussions should not be taken lightly. We should really also follow former players in clinical settings to make sure they are not ageing prematurely in terms of cognition.”

Dr. Lassonde is presenting as part of the Canada Press Breakfast at the AAAS Annual Meeting on Sunday, February 17th at 7:45 am in room 200 of the Hynes Convention Centre.