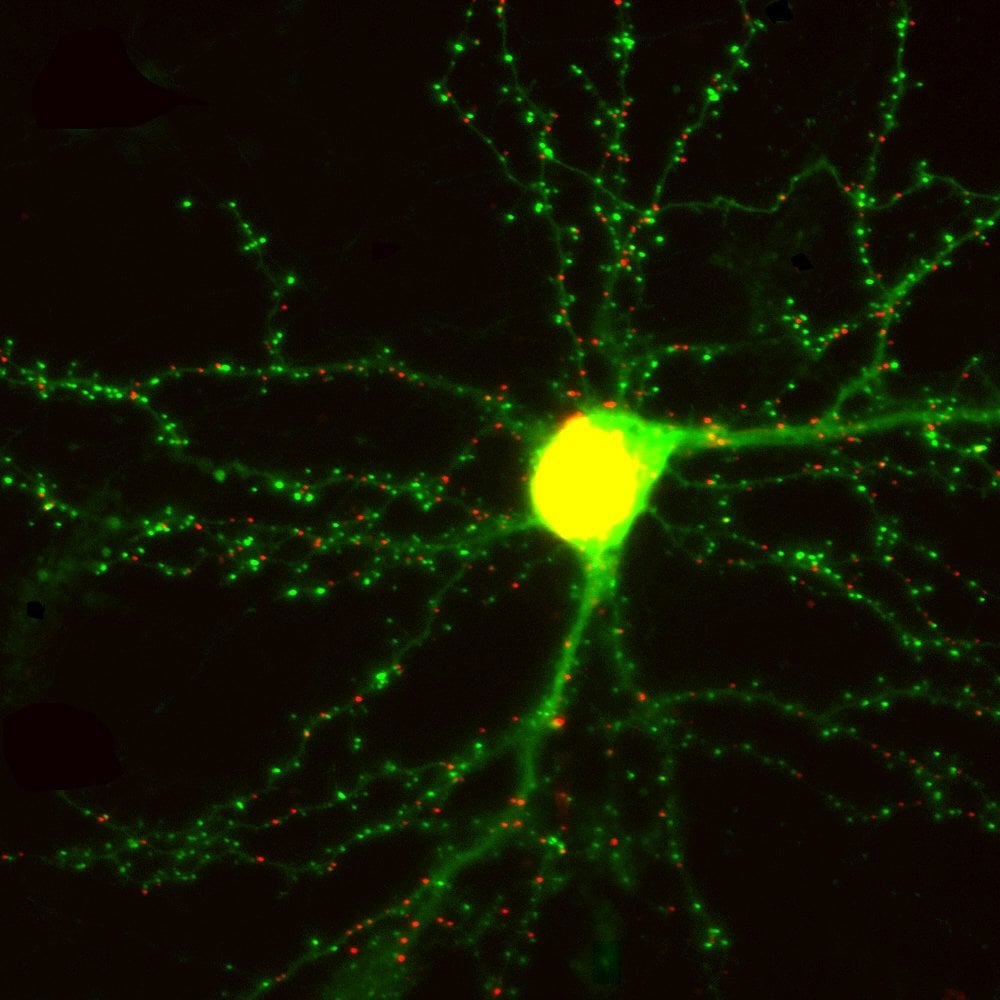 Oscar Wilde called memory “the diary that we all carry about with us.” Now a team of scientists has developed a way to see where and how that diary is written.

Led by Don Arnold and Richard Roberts of USC, the team engineered microscopic probes that light up synapses in a living neuron in real time by attaching fluorescent markers onto synaptic proteins — all without affecting the neuron’s ability to function.

The fluorescent markers allow scientists to see live excitatory and inhibitory synapses for the first time and, importantly, how they change as new memories are formed.

The synapses appear as bright spots along dendrites (the branches of a neuron that transmit electrochemical signals). As the brain processes new information, those bright spots change, visually indicating how synaptic structures in the brain have been altered by the new data.

“When you make a memory or learn something, there’s a physical change in the brain. It turns out that the thing that gets changed is the distribution of synaptic connections,” said Arnold, associate professor of molecular and computational biology at the USC Dornsife College of Letters, Arts and Sciences, and co-corresponding author of an article about the research that appears in Neuron on June 19.

The probes behave like antibodies, but they bind more tightly and are optimized to work inside the cell — something that ordinary antibodies can’t do. To make these probes, the team used a technique known as “mRNA display,” which was developed by Roberts and Nobel laureate Jack Szostak.

“Using mRNA display, we can search through more than a trillion different potential proteins simultaneously to find the one protein that binds the target the best,” said Roberts, co-corresponding author of the article and professor of chemistry and chemical engineering with joint appointments at USC Dornsife and the USC Viterbi School of Engineering.

Arnold and Roberts’ probes (called “FingRs”) are attached to green fluorescent protein (GFP), a protein isolated from jellyfish that fluoresces bright green when exposed to blue light. Because FingRs are proteins, the genes encoding them can be put into brain cells in living animals, causing the cells themselves to manufacture the probes.

The design of FingRs also includes a regulation system that cuts off the amount of FingR-GFP that is generated after 100 percent of the target protein is labeled, effectively eliminating background fluorescence — generating a sharper, clearer picture.

These probes can be put in the brains of living mice and then imaged through cranial windows using two-photon microscopy.

A New Type of Cell Death Discovered in Fly Guts

Modeled after the Human Genome Project, the objective of the $100 million initiative is to fast-track research that maps out exactly how the brain works and “better understand how we think, learn and remember,” according to the BRAIN Initiative website.

Notes about this electrophysiology and memory research