Using current techniques, Alzheimer’s disease, the most frequent cause of dementia, can only be detected once the typical plaques have formed in the brain. At this point, therapy seems no longer possible. However, the first changes caused by Alzheimer’s take place on the protein level up to 20 years sooner. A two-tier method developed at Ruhr-Universität Bochum (RUB) can help detect the disease at a much earlier stage. The researchers from Bochum published their report in the March 2019 edition of the journal Alzheimer’s and Dementia: Diagnosis, Assessment and Disease Monitoring.

“This has paved the way for early-stage therapy approaches, where the as yet inefficient drugs on which we had pinned our hopes may prove effective,” says Professor Klaus Gerwert from the Department of Biophysics at RUB.

In Alzheimer’s patients, the amyloid beta protein folds incorrectly due to pathological changes long before the first symptoms occur. A team of researchers headed by Klaus Gerwert successfully diagnosed this misfolding using a simple blood test; as a result, the disease can be detected approximately eight years before the first clinical symptoms occur. The test wasn’t suitable for clinical applications, however: it did detect 71 per cent of Alzheimer’s cases in symptomless stages, but at the same time provided false positive diagnoses for nine per cent of the study participants. In order to increase the number of correctly identified Alzheimer’s cases and to reduce the number of false positive diagnoses, the researchers poured a lot of time and effort into optimising the test.

As a result, they have now introduced the two-tier diagnostic method. To this end, they use the original blood test to identify high-risk individuals. Subsequently, they add a dementia-specific biomarker, namely tau protein, to run further tests with those test participants whose Alzheimer’s diagnosis was positive in the first step. If both biomarkers show a positive result, there is a high likelihood of Alzheimer’s disease. “Through the combination of both analyses, 87 of 100 Alzheimer’s patients were correctly identified in our study,” summarises Klaus Gerwert. “And we reduced the number of false positive diagnoses in healthy subjects to 3 of 100. The second analysis is carried out in cerebrospinal fluid that is extracted from the spinal cord.

“Now, new clinical studies with test participants in very early stages of the disease can be launched,” points out Gerwert.

He is hoping that the existing therapeutic antibodies will still have an effect. “Recently, two major promising studies have failed, especially Crenezumab and Aducanumab – not least because it had probably already been too late by the time therapy was taken up. The new test opens up a new therapy window.” 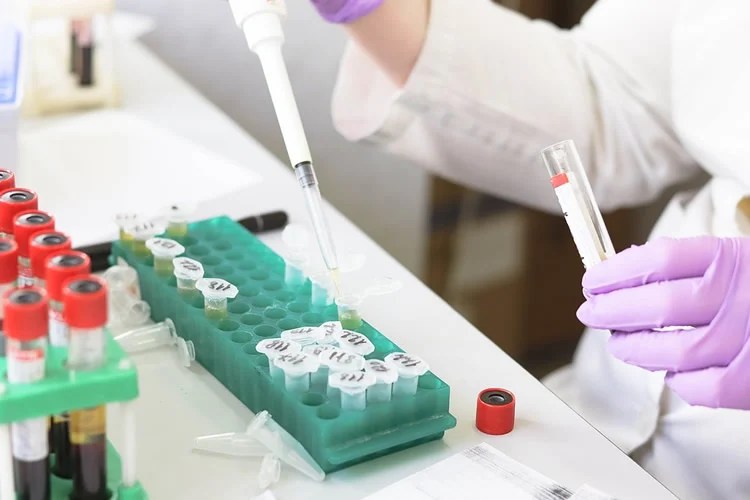 As a result, they have now introduced the two-tier diagnostic method. To this end, they use the original blood test to identify high-risk individuals. The image is in the public domain.

“Once amyloid plaques have formed, it seems that the disease can no longer be treated,” says Dr. Andreas Nabers, head of the research group and co-developer of the Alzheimer’s sensor. “If our attempts to arrest the progression of Alzheimer’s fail, it will put a lot of strain on our society.”

Sensor test is simple and robust

The blood test has been upgraded to a fully automated process at the RUB Department of Biophysics. “The sensor is easy to use, robust when it comes to fluctuation in concentration of biomarkers, and standardised,” explains Andreas Nabers. “We are now conducting in-depth research to detect the second biomarker, namely tau protein, in the blood, in order to supply a solely blood-based test in future,” concludes Klaus Gerwert.

Methods
We applied an immuno-infrared sensor to measure the amyloid-β (Aβ) and tau secondary structure distribution in plasma and CSF as structure-based biomarkers for AD (61 disease controls, 39 AD cases).

Discussion
The primary Aβ-based blood biomarker funnels individuals with suspected AD for subsequent validation of the diagnosis by structure-based combined analysis of the CSF biomarkers Aβ and tau. Our novel two-step recruitment strategy substantiates the diagnosis of AD with a likelihood of 29.