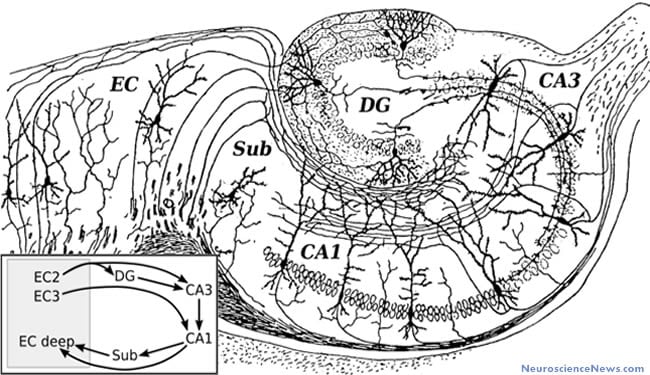 Swedish researchers at Uppsala University have, together with Brazilian collaborators, discovered a new group of nerve cells that regulate processes of learning and memory. These cells act as gatekeepers and carry a receptor for nicotine, which can help explain our ability to remember and sort information.

The discovery of the gatekeeper cells, which are part of a memory network together with several other nerve cells in the hippocampus, reveal new fundamental knowledge about learning and memory. The study is published today in Nature Neuroscience.

The hippocampus is an area of the brain that is important for consolidation of information into memories and helps us to learn new things. The newly discovered gatekeeper nerve cells, also called OLM-alpha2 cells, provide an explanation to how the flow of information is controlled in the hippocampus.

“It is known that nicotine improves cognitive processes including learning and memory, but this is the first time that an identified nerve cell population is linked to the effects of nicotine”, says Professor Klas Kullander at Scilifelab and Uppsala University.

Humans think, learn and memorize with the help of nerve cells sending signals between each other. Some nerve cells send signals far away to other areas of the brain, while other neurons send signals within the same area. Local nerve circuits in the hippocampus process impressions and turn some of them into memories. But how does this work? And how can nicotine improve this mechanism?

“We have used a new technology called optogenetics, in which light is used to stimulate selected nerve cells. We were amazed when we discovered that light activation of the gatekeeper cells alters the flow of information in the hippocampus in the same way as nicotine does”, explains coauthor Richardson Leão.

Next, the scientists want to test which types of memory and learning may be selected for by the activation of gatekeeper cells. With such knowledge, it may be possible to stimulate these nerve cells by artificial means, for example by selective nicotine-like drugs, to improve memory and learning in humans.

“Ideally, one would like to access the positive effects of nicotine on the hippocampus’s ability to process information, but without creating the strong nicotine dependence that keep smokers addicted to inhaling dangerous tobacco smoke”, says Klas Kullander.

Notes about this learning and memory research