Anti-inflammatory medicine can have a beneficial effect on depression

Summary: Anti-inflammatory medications, such as those commonly prescribed for arthritis, improve depressive symptoms in those with MDD.

The World Health Organization (WHO) calls depression one of the most serious mental disorders, and researchers around the world are trying to improve treatment of the disease.

Now in the largest meta-analysis ever carried out, researchers from iPSYCH have shown that medicine which inhibits inflammation such as e.g. arthritis medicine can also be effective in the treatment of people suffering from depression.

“Our study shows that a combination of anti-inflammatory medicine, which is what arthritis medicine is, and antidepressants can have an additional beneficial effect on patients with depression. The effect was also present when anti-inflammatory medicine was compared with a placebo in patients with a physical disease and depressive symptoms,” explains one of the researchers behind the study, PhD student and medical doctor Ole Köhler-Forsberg from Aarhus University and Aarhus University Hospital, Psychiatry.

The analysis is based on 36 international studies with a total of 9.422 patients who either suffered from depression or had depressive symptoms. The results have just been published in Acta Psychiatrica Scandinavica.

In addition to looking into arthritis medicine, the researchers also examined the effect of other forms of medication which have an anti-inflammatory effect, including glucocorticoids and the antibiotic minocycline, adrenocortical hormone and the statins that are used in the treatment of high cholesterol levels. All of them showed antidepressant effects.

“This definitely bolsters our chances of being able to provide personalized treatment for individual patients in the longer term. Of course, we always have to weigh the effects against the potential side-effects of the anti-inflammatory drugs. We still need to clarify which patients will benefit from the medicine and the size of the doses they will require. The findings are interesting, but patients should consult their doctor before initiating additional treatment,” says Ole Köhler-Forsberg.

He emphasizes that the biggest challenge with depression is that we still do not know what triggers the disease in a particular individual.

“Some studies suggest that the choice of antidepressant can be decided by a blood sample that measures whether there is an inflammatory condition in the body. Other studies show that the same blood sample can be used as a guideline for whether a depressive patient can be treated with anti-inflammatory medicine that has a better effect when there is inflammation present at the same time as the depression. However, we need to verify these findings and examine which patients can benefit from this before it can be implemented in everyday clinical practice,” Ole Köhler-Forsberg says.

Several treatment options on the horizon

“What’s persuasive is that we’ve found that several of the anti-inflammatory drugs have what can be characterized as a medium to a large effect on depression and depressive symptoms, in particular, because the results build on almost 10,000 people who have participated in the placebo-controlled studies with anti-inflammatory treatment,” explains medical doctor and PhD Michael Eriksen Benros, who is research director at the Mental Health Centre Copenhagen. 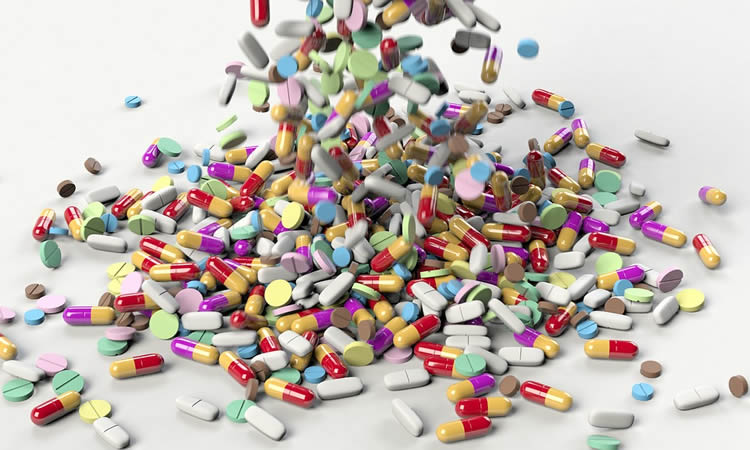 In addition to looking into arthritis medicine, the researchers also examined the effect of other forms of medication which have an anti-inflammatory effect, including glucocorticoids and the antibiotic minocycline, adrenocortical hormone and the statins that are used in the treatment of high cholesterol levels. All of them showed antidepressant effects. The image is in the public domain.

However, in many of the studies, the depressive symptoms were a secondary goal, meaning that large-scale and well-executed studies with depression as the primary objective are still needed. These must also be sufficiently large to assess the most beneficial dose and length of treatment, and also to identify which group of patients with depression are most likely to benefit from a supplementary anti-inflammatory treatment.

The hope is that research into the link between the immune system and depression can in the longer term provide more treatment options – including with anti-inflammatory medicine and preferably guided by biomarkers – so we can improve the treatment of depression, which is an area of intensive research at the moment,” says Michael Eriksen Benros.

Background for the results:

A meta-analysis is a method that makes it possible to combine the results from several studies to provide an overall result.

The study was carried out in a collaboration between researchers from Aarhus University and the Mental Health Centre Copenhagen, Copenhagen University Hospital.

Funding: iPSYCH is financed by the Lundbeck Foundation.

The results have been published in the article: Efficacy of anti-inflammatory treatment on major depressive disorder or depressive symptoms: Meta-analysis of clinical trials in Acta Psychiatrica Scandinavica.

Background
No study has gathered evidence from all randomized clinical trials (RCTs) with anti‐inflammatory drugs measuring antidepressant effects including a detailed assessment of side‐effects and bias.