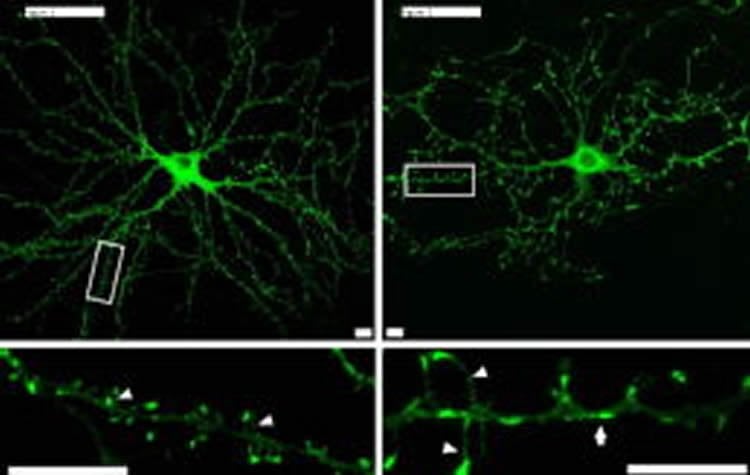 MK2/3 cascade plays a role in synaptic plasticity and cognition.

Scientists at the University of Warwick have provided the first evidence that the lack of a naturally occurring protein is linked to early signs of dementia.

Published in Nature Communications, the research found that the absence of the protein MK2/3 promotes structural and physiological changes to cells in the nervous system. These changes were shown to have a significant correlation with early signs of dementia, including restricted learning and memory formation capabilities.

An absence of MK2/3, in spite of the brain cells (neurons) having significant structural abnormalities, did not prevent memories being formed, but did prevent these memories from being altered.

The results have led the researchers to call for greater attention to be paid to studying MK2/3.

Lead researcher and author Dr Sonia Corrêa says that “Understanding how the brain functions from the sub-cellular to systems level is vital if we are to be able to develop ways to counteract changes that occur with ageing.

“By demonstrating for the first time that the MK2/3 protein, which is essential for neuron communication, is required to fine-tune memory formation this study provides new insight into how molecular mechanisms regulate cognition”.

Neurons can adapt memories and make them more relevant to current situations by changing the way they communicate with other cells.

Information in the brain is transferred between neurons at synapses using chemicals (neurotransmitters) released from one (presynaptic) neuron which then act on receptors in the next (postsynaptic) neuron in the chain.

The researchers found that change, caused by MK2/3’s absence, in the spine’s shape restricts the ability of neurons to communicate with each other, leading to alterations in the ability to acquire new memories.

“Deterioration of brain function commonly occurs as we get older but, as result of dementia or other neurodegenerative diseases, it can occur earlier in people’s lives”, says Dr Corrêa. “For those who develop the early signs of dementia it becomes more difficult for them to adapt to changes in their life, including performing routine tasks.

“For example, washing the dishes; if you have washed them by hand your whole life and then buy a dishwasher it can be difficult for those people who are older or have dementia to acquire the new memories necessary to learn how to use the machine and mentally replace the old method of washing dishes with the new. The change in shape of the postsynaptic neuron due to absence of MK2/3 is strongly correlated with this inability to acquire the new memories”.

Dr Corrêa argues that “Given their vital role in memory formation, MK2/3 pathways are important potential pharmaceutical targets for the treatment of cognitive deficits associated with ageing and dementia.”

The research was supported by the BBSRC.

The interplay between long-term potentiation and long-term depression (LTD) is thought to be involved in learning and memory formation. One form of LTD expressed in the hippocampus is initiated by the activation of the group 1 metabotropic glutamate receptors (mGluRs). Importantly, mGluRs have been shown to be critical for acquisition of new memories and for reversal learning, processes that are thought to be crucial for cognitive flexibility. Here we provide evidence that MAPK-activated protein kinases 2 and 3 (​MK2/3) regulate neuronal spine morphology, synaptic transmission and plasticity. Furthermore, mGluR-LTD is impaired in the hippocampus of ​MK2/3 double knockout (DKO) mice, an observation that is mirrored by deficits in endocytosis of ​GluA1 subunits. Consistent with compromised mGluR-LTD, ​MK2/3 DKO mice have distinctive deficits in hippocampal-dependent spatial reversal learning. These novel findings demonstrate that the ​MK2/3 cascade plays a strategic role in controlling synaptic plasticity and cognition.