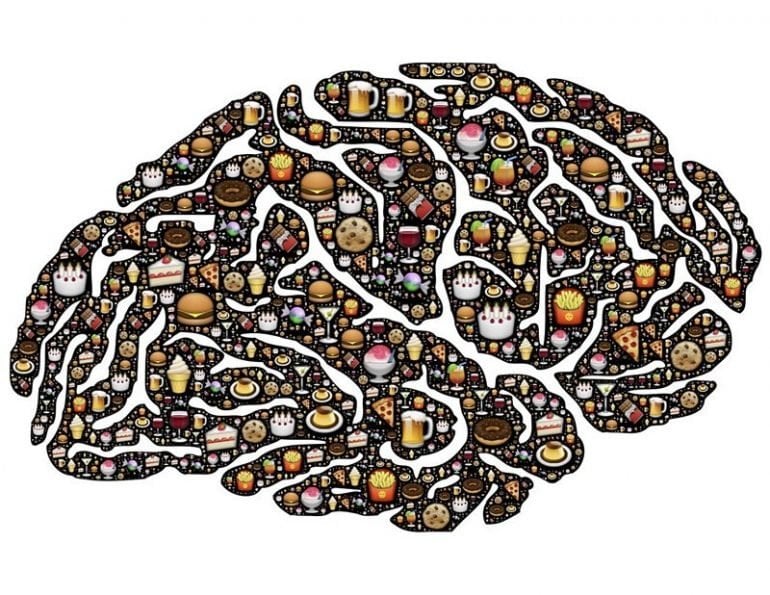 Overall, people who did not have dementia were more likely to have a lot of diversity in their diet, demonstrated by many small food networks that usually included healthier foods, such as fruit and vegetables, seafood, poultry or meats. Image is in the public domain.

Summary: In the case of dementia, it might not be what you eat, but more of what combination of foods you eat, which increases your risk of developing the neurodegenerative disorder. Researchers found those whose diets consisted mostly of highly-processed meats, starchy foods, and sugary snacks were more likely to be diagnosed with dementia later in life that those who consumed healthier foods.

It’s no secret that a healthy diet may benefit the brain. However, it may not only be what foods you eat, but what foods you eat together that may be associated with your risk of dementia, according to a new study published in the April 22, 2020, online issue of Neurology. The study looked at “food networks” and found that people whose diets consisted mostly of highly processed meats, starchy foods like potatoes, and snacks like cookies and cakes, were more likely to have dementia years later than people who ate a wider variety of healthy foods.

“There is a complex inter-connectedness of foods in a person’s diet, and it is important to understand how these different connections, or food networks, may affect the brain because diet could be a promising way to prevent dementia,” said study author Cécilia Samieri, PhD, of the University of Bordeaux in France. “A number of studies have shown that eating a healthier diet, for example a diet rich in green leafy vegetables, berries, nuts, whole grains and fish, may lower a person’s risk of dementia. Many of those studies focused on quantity and frequency of foods. Our study went one step further to look at food networks and found important differences in the ways in which food items were co-consumed in people who went on to develop dementia and those who did not.”

The study involved 209 people with an average age of 78 who had dementia and 418 people, matched for age, sex and educational level, who did not have dementia.

Participants had completed a food questionnaire five years previously describing what types of food they ate over the year, and how frequently, from less than once a month to more than four times a day. They also had medical checkups every two to three years. Researchers used the data from the food questionnaire to compare what foods were often eaten together by the patients with and without dementia.

Researchers found while there were few differences in the amount of individual foods that people ate, overall food groups or networks differed substantially between people who had dementia and those who did not have dementia.

Overall, people who did not have dementia were more likely to have a lot of diversity in their diet, demonstrated by many small food networks that usually included healthier foods, such as fruit and vegetables, seafood, poultry or meats.

“We found that more diversity in diet, and greater inclusion of a variety of healthy foods, is related to less dementia,” said Samieri. “In fact, we found differences in food networks that could be seen years before people with dementia were diagnosed. Our findings suggest that studying diet by looking at food networks may help untangle the complexity of diet and biology in health and disease.”

One limitation of the study was that participants completed a food questionnaire that relied on their ability to accurately recall diet rather than having researchers monitor their diets. Another limitation was that diets were only recorded once, years before the onset of dementia, so any changes in diet over time were unknown.

Frequent Travel Could Make You 7% Happier

Objective
To use network science to model complex diet relationships a decade before onset of dementia in a large French cohort, the 3-City Bordeaux study.

Methods
We identified cases of dementia incident to the baseline food frequency questionnaire over 12 years of follow-up. For each case, we randomly selected 2 controls among individuals at risk at the age at case diagnosis and matched for age at diet assessment, sex, education, and season of the survey. We inferred food networks in both cases and controls using mutual information, a measure to detect nonlinear associations, and compared food consumption patterns between groups.

Results
In the nested case-control study, the mean (SD) duration of follow-up and number of visits were 5.0 (2.5) vs 4.9 (2.6) years and 4.1 (1.0) vs 4.4 (0.9) for cases (n = 209) vs controls (n = 418), respectively. While there were few differences in simple, average food intakes, food networks differed substantially between cases and controls. The network in cases was focused and characterized by charcuterie as the main hub, with connections to foods typical of French southwestern diet and snack foods. In contrast, the network of controls included several disconnected subnetworks reflecting diverse and healthier food choices.

Conclusion
How foods are consumed (and not only the quantity consumed) may be important for dementia prevention. Differences in predementia diet networks, suggesting worse eating habits toward charcuterie and snacking, were evident years before diagnosis in this cohort. Network methods, which are designed to model complex systems, may advance our understanding of risk factors for dementia.