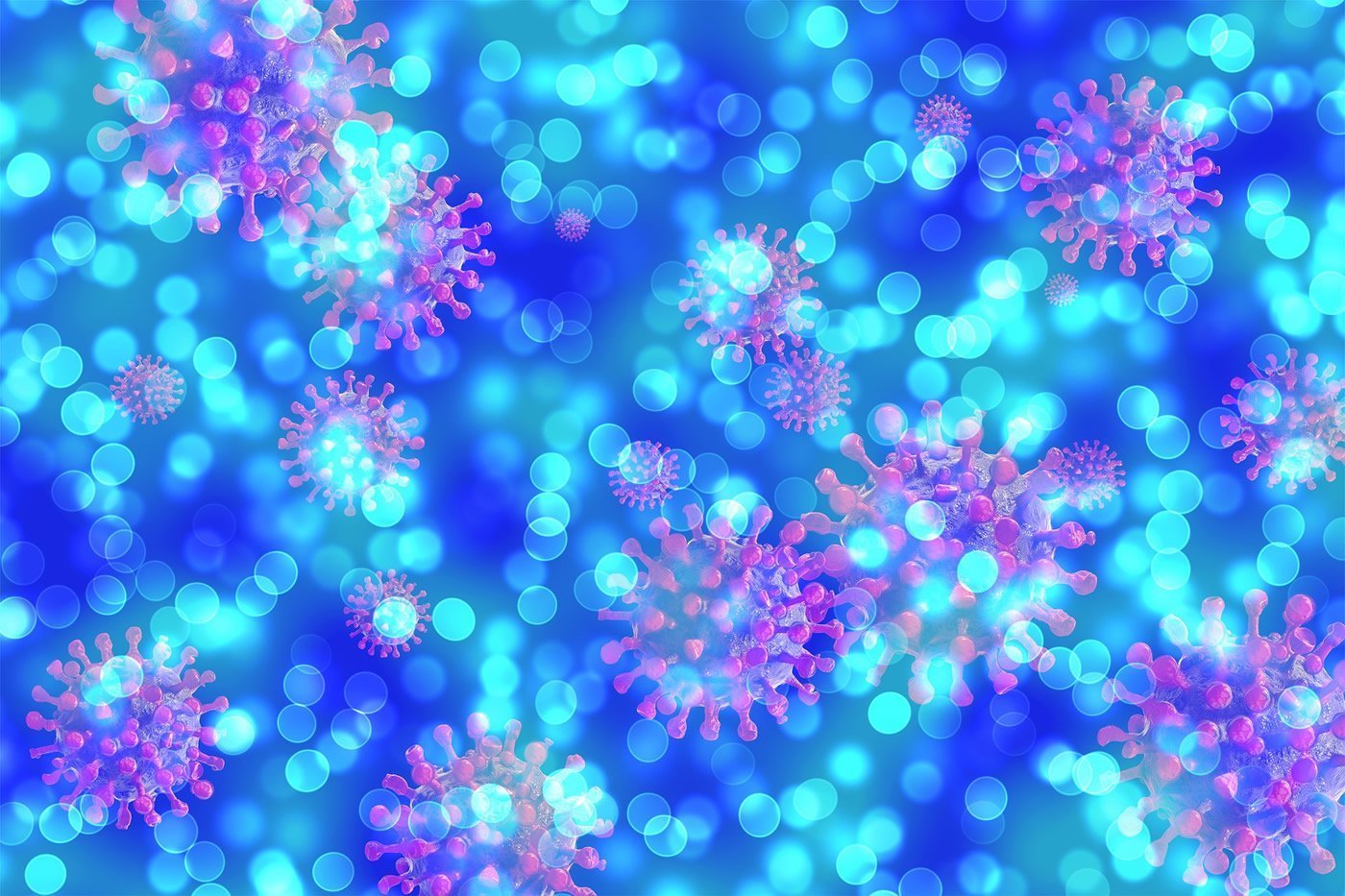 In terms of direct neurological involvement, the best way to think about this is in terms of what path the virus can take to get into the nervous system. Image is in the public domain.

The Potential of COVID-19 to Infect the Brain

Summary: From losing the sense of taste or smell to developing an increased risk of stroke, researchers investigate both the known and potential long-term implications of COVID-19 infection in the brain.

As COVID-19 spreads throughout the country, much attention has been paid to the devastating effects of the virus on the lungs. But doctors are learning how the virus may affect other organs, including the brain.

Some patients with COVID-19 have had neurological symptoms, which may include an increased risk of stroke. Other symptoms may include headache, loss of the senses of smell and taste, hallucinations, vivid dreams, meningitis and seizures.

Neurologists Elyse Singer, MD and David Liebeskind, MD, explain what is known — and not yet known — about the neurologic complications of COVID-19.

Dr. Singer is the director of the Neuro-Infectious Diseases Program at UCLA, as well as the founder of the National Neurological AIDS Bank. Dr. Liebeskind is director of the UCLA Stroke Center.

Is there evidence that this virus can infect the brain and nervous system?

Dr. Singer: Yes. Reports are beginning to trickle in of patients who have had strokes, brain swelling, seizures and other neurological problems, but it is not certain that this is a direct effect of the virus. We know that this type of coronavirus can invade the brain and cause disease. For many respiratory coronaviruses, that’s uncommon. However, this particular virus is closely related to the SARS virus, which has been found in the nervous system.

Dr. Liebeskind: In terms of direct neurological involvement, the best way to think about this is in terms of what path the virus can take to get into the nervous system. The lack of smell and taste that occurs early on has been linked to invasion of the olfactory bulb, the part of the brain that processes smell, and that may be a way the virus can directly penetrate and get into the nervous system.

If a person experiences loss of smell or taste, does that mean the virus has infected their nerve cells?

Dr. Singer: Loss of smell and loss of taste is turning out to be a very common early symptom of COVID-19. Experience with previous coronaviruses indicates they can easily infect the nasal epithelium, the lining of the nose and mouth. These tissues are very rich with something called the ACE2 receptor, which is what the virus binds to in order to infect the cell.

In studies of animals with this virus, and in humans with other coronaviruses, researchers have been able to demonstrate that the virus can infect the olfactory nerve, which goes from the nose into the brain. That might be one way that it gets into the brain. It doesn’t necessarily mean you’ll get a horrible brain infection, because you have an immune system in your brain.

I’ve actually talked to physicians who have had COVID-19, and they weren’t that sick, but their first symptom was loss of taste and smell, and it preceded the other symptoms by a number of days.

Could people who have mild cases of COVID-19 and recover go on to develop neurological complications later?

Dr. Liebeskind: That is a scenario that does exist with some viral disorders, and we don’t know yet how this coronavirus is likely to behave. One thing I predict we’ll hear more about in the next two or three weeks, there are some reports that have come out in the last several days of significant effects on the central nervous system, in terms of hallucinations, or wild dreams, or other alterations in mental status. Such symptoms don’t evolve from nothing, but the question is, does that represent infection of the CNS, or secondary involvement somehow? The initial focus was on breathing and respiratory complications, and it’s taken a couple months, but people are starting to delve into secondary impacts, either neurological complications or how it affects patients with neurologic disorders.

Dr. Singer: I think it’s too early to say, and I certainly hope it’s not the case. There is another issue, which is the extreme stress that COVID-19 places on the person’s psychological behavior. Many people who have COVID-19 become extremely anxious, and if they have to be hospitalized and put on a respirator, this is an incredibly stressful and frightening experience. There is likely going to be some element of PTSD in COVID-19 survivors after going through the ventilator experience.

What role does inflammation play in how COVID-19 affects the brain?

Dr. Singer: In almost every neurodegenerative disease, there is a role for inflammation in the brain and in general, inflammation makes things worse. In COVID-19, people get something called a cytokine storm, where their body pours out inflammatory chemicals in an attempt to rid itself of the virus. However, these chemicals can have long-term effects on the body, and probably on the brain as well. Because of the intense systemic inflammation, which can cause many organs to fail, there’s also the possibility that some of the neurological problems are due to other occurrences in the body, such as a drop in blood pressure, sepsis, fever and abnormal coagulation of the blood, which could lead to stroke.

Are there other ways that COVID-19 can cause neurological damage?

Dr. Liebeskind: The other very unusual impact of COVID-19 is the nature of the stroke cases that we’re seeing. There appears to be a clear link with a clotting disorder that will increase the tendency to have blood clots form in the larger vessels, and cause stroke in relatively younger patients than we would normally expect. This has been suggested from cases in Italy, New York, and other locations. In some severe cases you see clotting in the blood vessels of the heart and lungs, and they’ve tried treating that with blood thinners. Experience has been limited, because their attempted use has been in the most severe cases, who have a high mortality rate, so it’s hard to determine whether these medications are working or not.

Fruit, Vegetables and Exercise Can Make You Happier

Are patients with existing neurological disorders at increased risk of complications from COVID-19?

Dr. Singer: We don’t know, but I would be very concerned about that. Obviously, people with severe cardiovascular or cerebrovascular disease would be at higher risk of stroke than other patients. Many people with neurologic diseases, such as multiple sclerosis, are on treatment that suppresses the immune system, and we don’t know how that is going to interact with a COVID-19 infection. If you go to a neurology clinic right now, something like 10-20% of our patients are immunosuppressed, because they have an inflammatory disease. We give them a medicine to get rid of their inflammation, but that also gets rid of their natural protective mechanisms against viruses and bacteria.

Dr. Liebeskind: It’s quite complex, because a lot of neurological disorders may limit one’s ability to either communicate or to walk or to function normally. That may predispose those individuals to infection. That is a great concern. In general, individuals with neurologic disorders often are seen to be more severely affected, and therefore the benefit of interventions may not be that great. That’s a bias we have to avoid as much as possible.

What kind of research is going on now on this problem?

Dr. Singer: Obviously, this is a very interesting area, and I think that it’s getting a lot of people in neurology engaged. Unlike other health problems, it’s affecting everybody. There are people in our department doing niche research, and basic science research, who are rather removed from taking care of sick humans in a clinic, that are jumping into this because it’s affecting their lives. I see a tremendous amount of motivation for people to get engaged with trying to solve this problem.

Dr. Liebeskind: Every single center is looking at their data on strokes during this period as it relates to a similar period from a year ago, to see how it’s impacting not just the volume of stroke patients they see but also the nature of the stroke patients and the care they’ve been given. In the coming weeks and months, there’s going to be a lot of data reported on that.

I think that some of the most strategic research is going to revolve indirectly around the pandemic, and that’s going to be around the use of telemedicine. Is it simply easier and more effective, and more appreciated by patients, to be seen in telemedicine? I think the answer will be yes, but proving it will be a big battle. The question will arise, do we return to the way we used to do things, or do we stay with the new normal? Those are societal questions that relate to public health and health care delivery on a larger scale. There are positive and creative and productive side effects of this pandemic, and I would say that the maturation and graduation of telemedicine during this period, I applaud, and I would recognize as a significant achievement and a productive step forward.