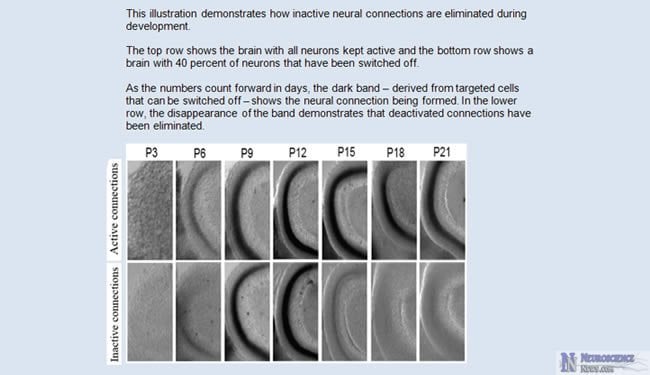 From the Petri dish into a living organism, for the first time U-M scientists observe key aspects of how the brain shapes itself

Scientists at the University of Michigan Health System have for the first time demonstrated how memory circuits in the brain refine themselves in a living organism through two distinct types of competition between cells.

Their results, published today in Neuron, mark a step forward in the search for the causes of neurological disorders associated with abnormal brain circuits, such as Alzheimer’s disease, autism and schizophrenia.

“Much of our understanding of the brain’s wiring has come from studying our sensory and motor systems, but far less is understood about the mechanisms that organize neural circuits involved in higher brain functions, like learning and memory,” says senior author Hisashi Umemori, M.D., Ph.D., assistant research professor at U-M’s Molecular and Behavioral Neuroscience Institute and assistant professor of biological chemistry at the U-M Medical School.

Brain cells grow and extend along pathways to link different parts of the brain, Umemori explains. As the brain develops, these connections fine-tune themselves and become more efficient. Problems with this refinement process may be responsible for some neurological disorders.

“We wanted to know how brain circuits become more efficient during the brain’s development,” Umemori adds. “Does the brain choose to keep good connections and get rid of bad ones and, if so, how?”

To examine how neural activity organizes memory circuits, researchers used mice that had been genetically modified so that neurons of interest purposefully could be switched off.

The scientists focused on an important connection between the hippocampus, which is crucial for learning and memory, and the cerebral cortex, which is key for perception and awareness. They deactivated about 40 percent of the neurons in the connection and, over a matter of days, watched as the brain eliminated the inactive neural connections and kept only the active ones. A subsequent part of the experiment showed that if all the neurons were deactivated, their connections were not eliminated.

“This tells us that the brain has a way of telling among a group of neurons which connections are better than others,” Umemori says. “The neurons are in competition with each other. So when they’re all equally bad, none can be eliminated.”

The researchers also looked at a part of the hippocampus called the dentate gyrus, which is only one of two areas of the brain that continues to generate new neurons throughout life. Here they found a second distinct type of competition: newborn cells were competing with mature cells, rather competition occurring between mature cells.

One Autoimmune Disease Could Lead To Another

When scientists blocked the dentate gyrus’ ability to make new cells, the elimination stopped and the brain kept the existing cells even if they were deactivated.

“The better the brain is at eliminating bad connections to keep the circuitry at its most efficient, the more efficient learning and memory will be as well,” Umemori explains.

He adds, “The better we understand how these mechanisms work, the better we’ll be able to understand what’s happening when they aren’t working.”