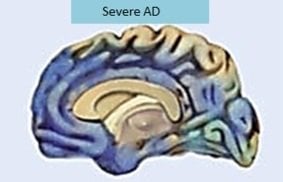 New research has shown that one of the few drugs approved for the treatment of Alzheimer’s disease helps patients by clearing up the signals coming in from the outside world.
Home
Featured

Scientists at the Virginia Tech Carilion Research Institute have discovered how the predominant class of Alzheimer’s pharmaceuticals might sharpen the brain’s performance.

One factor even more important than the size of a television screen is the quality of the signal it displays. Having a life-sized projection of Harry Potter dodging a Bludger in a Quidditch match is of little use if the details are lost to pixilation.

The importance of transmitting clear signals, however, is not relegated to the airwaves. The same creed applies to the electrical impulses navigating a human brain. Now, new research has shown that one of the few drugs approved for the treatment of Alzheimer’s disease helps patients by clearing up the signals coming in from the outside world.

The discovery was made by a team of researchers led by Rosalyn Moran, an assistant professor at the Virginia Tech Carilion Research Institute. Her study indicates that cholinesterase inhibitors — a class of drugs that stop the breakdown of the neurotransmitter acetylcholine — allow signals to enter the brain with more precision and less background noise.

“Increasing the levels of acetylcholine appears to turn your fuzzy, old analog TV signal into a shiny, new, high-definition one,” said Moran, who holds an appointment as an assistant professor in the Virginia Tech College of Engineering. “And the drug does this in the sensory cortices. These are the workhorses of the brain, the gatekeepers, not the more sophisticated processing regions — such as the prefrontal cortex — where one may have expected the drugs to have their most prominent effect.”

Alzheimer’s disease affects more than 35 million people worldwide — a number expected to double every 20 years, leading to more than 115 million cases by 2050. Of the five pharmaceuticals approved to treat the disease by the U.S. Food and Drug Administration, four are cholinesterase inhibitors. Although it is clear that the drugs increase the amount of acetylcholine in the brain, why this improves Alzheimer’s symptoms has been unknown. If scientists understood the mechanisms and pathways responsible for improvement, they might be able to tailor better drugs to combat the disease, which costs more than $200 billion annually in the United States alone.

In the new study, Moran recruited 13 healthy young adults and gave them doses of galantamine, one of the cholinesterase inhibitors commonly prescribed to Alzheimer’s patients. Two electroencephalographs were taken — one with the drugs and one without — as the participants listened to a series of modulating tones while focusing on a simple concentration task.

The researchers were looking for differences in neural activity between the two drug states in response to surprising changes in the sound patterns that the participants were hearing.

The scientists compared the results with computer models built on a Bayesian brain theory, known as the Free Energy Principle, which is a leading theory that describes the basic rules of neuronal communication and explains the creation of complex networks.

The theory hypothesizes that neurons seek to reduce uncertainty, which can be modeled and calculated using free energy molecular dynamics. Connecting tens of thousands of neurons behaving in this manner produces the probability machine that we call a brain.

Moran and her colleagues compiled 10 computer simulations based on the different effects that the drugs could have on the brain. The model that best fit the results revealed that the low-level wheels of the brain early on in the neural networking process were the ones benefitting from the drugs and creating clearer, more precise signals.

“When people take these drugs you can imagine the brain bathed in them,” Moran said. “But what we found is that the drugs don’t have broad-stroke impacts on brain activity. Instead, they are working very specifically at the cortex’s entry points, gating the signals coming into the network in the first place.”

Notes about this neuropharmacology and Alzheimer’s disease research

The study appears in Wednesday’s (May 8) issue of The Journal of Neuroscience in the article, “Free Energy, Precision and Learning: The Role of Cholinergic Neuromodulation.”

Written by Ken Kingery
Contact: Ken Kingery – Virginia Tech Carilion Research Institute
Source: Virginia Tech Carilion Research Institute press release
Image Source: The severe Alzheimer’s disease brain image is available in the public domain.
Original Research: The research, “Free Energy, Precision and Learning: The Role of Cholinergic Neuromodulation.” will appear in the Journal of Neuroscience on Wednedsay May 8 2013. We will update with a link to the research when available.