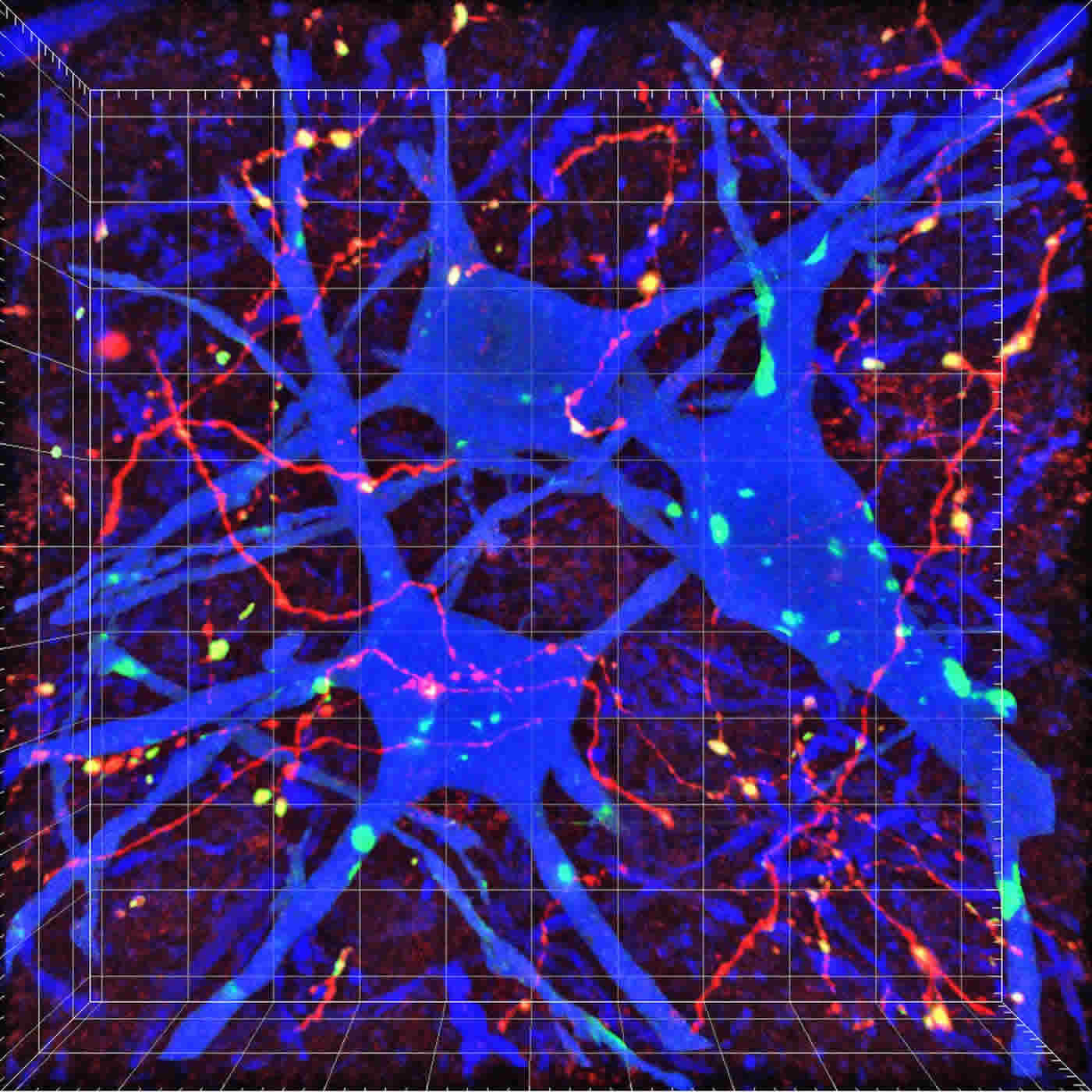 This microscopic image shows corticospinal neurons and synaptic connections to the spinal cord in a mouse. Spinal interneurons (blue) show synaptic connections (in green) with corticospinal axons (red). Researchers report in Cell Reports the mapping of critical nerve connections to the spine that drive voluntary movement in forelimbs. The gridlines allow scientists to plot the neuron locations along the spinal cord. Scientists say the information will be useful as they begin searching in future preclinical studies for specific repair strategies to help people who had a stroke or spinal cord injury. NeuroscienceNews.com image is credited to Cincinnati Children's.

The study by Yutaka Yoshida, PhD, and colleagues at Cincinnati Children’s Hospital Medical Center is an important step toward rehabilitating motor circuits to help motor function recover after an injury or disease damages the central nervous system, the scientists report in Cell Reports.

“The map described in this study should allow us to explore which corticospinal-spinal interneuron connections are good targets for repair and restoration of voluntary movement,” says Yoshida, lead investigator in the Division of Developmental Biology. “More research is necessary before human therapies are possible, but this information is very helpful for future repair strategies. We now know which circuits need to be repaired.”

The scientists said it will take years for additional investigative work to make the current findings therapeutically relevant. Yoshida and colleagues are conducting new studies to build on the basic neuronal architecture identified in the current study. They want to reach a point where these circuits can be reconstructed to stimulate the recovery of motor function central nervous system injuries.

Little has been known about how the corticospinal network of nerve connections between the brain and spinal cord are organized and function together. Seemingly simple tasks like reaching or grabbing require precise coordination between sensory and motor information transmitted through these coordinated connections, according to the researchers.

To map this connectivity in the current study, the scientists study these circuits in laboratory mice–taking advantage of similar corticospinal connections in primates, cats, and rodents.

Working initially from previous studies by his research team and others, Yoshida and colleagues were able to track corticospinal connections from the brain’s cerebral cortex near the top of the head down to the spinal cord. They also traced the organization and function of corticospinal circuits using mouse genetics, and a viral tracer (a de-armed rabies virus) that allowed investigators to highlight and capture images of these links.

The connections trace down through what’s called the brain’s internal capsule, then arrive at the caudal medulla of the brain just above the spinal cord. From there they enter the spinal cord, crisscrossing deep inside the spine as they continue to protrude downward and make additional connections.

In these areas, the scientists show how the nerve fibers connect onto certain premotor interneurons and transmit impulses between neurons to trigger skilled movements. This includes nerve fibers that express a transcription factor called Chx10 (a regulator gene that instructs other genes to turn on or off to initiate biological functions).

Chx10 is linked to nervous system function in other parts of the body, including the eyes. When the researchers silenced Chx10 only in the cervical spinal cord, it hampered the animals’ ability to reach for food.

The Importance of Sensing

This is important because when the scientist inhibited neurons expressing Vglut3 in the cervical spinal cord, it also caused deficits in the animals’ ability to grab and release food pellets, as well as other goal-oriented tasks.