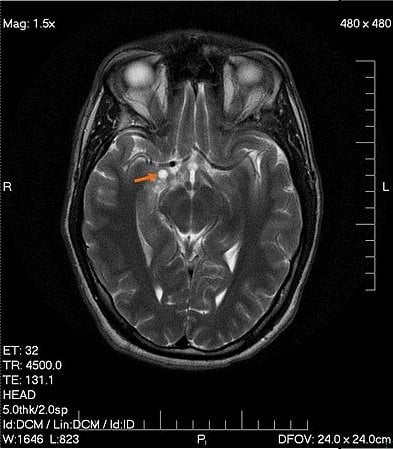 Researchers targeted a mutation in the IDH1 gene, which had previously been identified in glioma brain tumors. The mutation was present in 70-80% of lower grade and progressive forms of the cancer.This image shows an MRI scan of a male patient with a low grade glioma.
Home
Brain Cancer

Working with mice, Johns Hopkins researchers have discovered that weeks of treatment with a repurposed FDA-approved drug halted the growth of — and ultimately left no detectable trace of — brain tumor cells taken from adult human patients.

The scientists targeted a mutation in the IDH1 gene first identified in human brain tumors called gliomas by a team of Johns Hopkins cancer researchers in 2008. This mutation was found in 70 to 80 percent of lower-grade and progressive forms of the brain cancer. The change occurs within a single spot along a string of thousands of genetic coding letters, and is disruptive enough to keep the seemingly innocuous protein from playing its role in converting glucose into energy. Instead, the mutation hijacks the protein to make a new molecule not normally found in the cell, which is apparently a linchpin in the process of forming and maintaining cancer cells.

Encouraged by the new findings, described online Sept. 16 in the open-access journal Oncotarget, the Johns Hopkins researchers say they want to work quickly to design a clinical trial to bring what they learned in mice to humans with gliomas. Despite the growing understanding of IDH1 mutant gliomas, the development of effective therapies has proven challenging, they say.

“Usually in the lab, we’re happy to see a drug slow down tumor growth,” says Alexandra Borodovsky, a graduate student in the Cellular and Molecular Medicine Program at the Johns Hopkins University School of Medicine who performed the experiments. “We never expect tumors to regress, but that is exactly what happened here.”

“This therapy has worked amazingly well in these mice,” says study leader Gregory J. Riggins, M.D., Ph.D., a professor of neurosurgery and oncology at the Johns Hopkins University School of Medicine. “We have spoken with neurosurgeons here, and as soon as possible, we want to start discussing the parameters of a clinical trial to see if this will work in our patients as a follow-up to surgery.”

The researchers caution that many treatments have cured cancers in mice, and then failed in humans.

The IDH1 gene, whose name stands for isocitrate dehydrogenase 1, produces an enzyme that regulates cell metabolism. Mutations, or changes in the DNA code, force the IDH1 gene to increase production of a flawed version of the enzyme. The flawed enzyme produces large amounts of an entirely new molecule, called 2-hydroxyglutarate. This molecule is believed to cause groups of atoms called methyl groups to latch onto the DNA strand.

Although methylation is a normal cellular process, when too many methyl groups glom onto the DNA, Riggins says, this can interfere with normal cell biology and eventually contribute to cancer formation and growth.

Borodovsky, Riggins and their colleagues — including Timothy A. Chan, M.D., Ph.D., of Memorial Sloan-Kettering Cancer Center in New York — thought that a drug that could strip those methyl groups might be able to reverse the cancer process in those cancers with IDH1 mutations. They chose 5-azacytidine, which is approved to treat a pre-leukemia condition called myelodysplastic syndrome and is being tested on lung and other cancers at Johns Hopkins and elsewhere.

Riggins notes that one of the difficulties in developing treatments for IDH1 mutant brain cancers is finding a model in which to study them. Cell lines containing the IDH1 mutation are difficult to grow in the laboratory, for example. Borodovsky worked with Johns Hopkins neurosurgeons to obtain tumor cells from glioma patients likely to have IDH1 mutations and injected them under the skins of mice. She did this for months, before finally getting the tumor cells to grow.

Once the tumors grew, the researchers injected the mice with 5-azacytidine for 14 weeks and saw a dramatic reduction in growth and what appeared to be complete regression. Then they withdrew therapy. Seven weeks later, the tumors had not regrown. The researchers, however, said they do expect the tumors to regrow at some point, and are still monitoring the mice.

The type of tumor targeted by the researchers eventually progresses to a subtype of glioblastoma multiform — the deadliest form of brain cancer — known as progressive or secondary glioblastoma. They arise as a lower-grade glioma and are initially treated with surgery alone, but eventually they progress to the more lethal form of tumor. Survival is longer than with glioblastoma, but it is found in younger patients, those under the age of 50. While both types of tumor look the same at the end, they look very different at the molecular level, Riggins says, leading researchers to believe they may have a better chance at targeting the progressive tumors, which are more likely to have the IDH1 mutation.

What Makes People Willing to Risk Their Lives to Save Others?

Chan’s team at Sloan-Kettering simultaneously published a paper in Oncotarget, along with Borodovsky and Riggins, which describes similar results in a different animal model using a similar drug. This is further evidence that the strategy is a sound one, Riggins says.

The work was supported by the Conrad N. Hilton Foundation, the Virginia and D.K. Ludwig Fund for Cancer Research, Margaret H. Riggins, and the Irving J. Sherman Research Professorship in Neurosurgery. Funding also came from grants from the National Institutes of Health’s National Cancer Institute (P30 CA006973) and the National Center for Research Resources (UL1 RR025005 and 1S10RR026824-01).