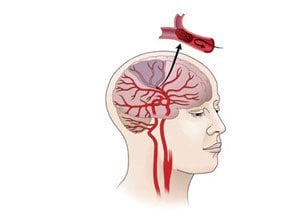 Using a rat model, researchers investigated the subacute phase of ischemic stroke and found deficits in the microvascular integrity in the brain hemisphere opposite to where the initial stroke injury occurred. An ischemic stroke occurs when a blood vessel supplying the brain becomes blocked, as by a clot.
Home
Featured

Researchers Find Far-Reaching, Microvascular Damage in Uninjured Side of Brain After Stroke

Findings suggest that blood-brain barrier integrity suffers days after ischemic stroke, leading to serious complications; repair of this protective barrier might prevent them.

While the effects of acute stroke have been widely studied, brain damage during the subacute phase of stroke has been a neglected area of research. Now, a new study by the University of South Florida reports that within a week of a stroke caused by a blood clot in one side of the brain, the opposite side of the brain shows signs of microvascular injury.

Stroke is a leading cause of death and disability in the United States, and increases the risk for dementia.

“Approximately 80 percent of strokes are ischemic strokes, in which the blood supply to the brain is restricted, causing a shortage of oxygen,” said study lead author Svitlana Garbuzova-Davis, PhD, associate professor in the USF Department of Neurosurgery and Brain Repair. “Minutes after ischemic stroke, there are serious effects within the brain at both the molecular and cellular levels. One understudied aspect has been the effect of ischemic stroke on the competence of the blood-brain barrier and subsequent related events in remote brain areas.”

Using a rat model, researchers at USF Health investigated the subacute phase of ischemic stroke and found deficits in the microvascular integrity in the brain hemisphere opposite to where the initial stroke injury occurred.

The USF team found that “diachisis,” a term used to describe certain brain deficits remote from primary insult, can occur during the subacute phase of ischemic stroke. The research discovered diachisis is closely related to a breakdown of the blood-brain barrier, which separates circulating blood from brain tissue.

In the subacute phase of an ischemic stroke, when the stroke-induced disturbances in the brain occur in remote brain microvessels, several areas of the brain are affected by a variety of injuries, including neuronal swelling and diminished myelin in brain structures. The researchers suggest that recognizing the significance of microvascular damage could make the blood-brain barrier (BBB) a therapeutic “target” for future neuroprotective strategies for stroke patients.

The mechanisms of BBB permeability at different phases of stroke are poorly understood. While there have been investigations of BBB integrity and processes in ischemic stroke, the researchers said, most examinations have been limited to the phase immediately after stroke, known as acute stroke. Their interest was in determining microvascular integrity in the brain hemisphere opposite to an initial stroke injury at the subacute phase.

Accordingly, this study using rats with surgically-simulated strokes was designed to investigate the effect of ischemic stroke on the BBB in the subacute phase, and the effects of a compromised BBB upon various brain regions, some distant from the stroke site.

“The aim of this study was to characterize subacute diachisis in rats modeled with ischemic stroke,” said co-author Cesar Borlongan, PhD, professor and vice chairman for research in the Department of Neurosurgery and Brain Repair and director of the USF Center for Aging and Brain Repair. “Our specific focus was on analyzing the condition of the BBB and the processes in the areas of the brain not directly affected by ischemia. BBB competence in subacute diachisis is uncertain and needed to be studied.”

Their findings suggest that damage to the BBB, and subsequent vascular leakage as the BBB becomes more permeable, plays a major role in subacute diachisis.

The increasing BBB permeability hours after the simulated stroke, and finding that the BBB “remained open” seven days post-stroke, were significant findings, said Dr. Garbuzova-Davis, who is also a researcher in USF Center for Aging and Brain Repair. “Since increased BBB permeability is often associated with brain swelling, BBB leakage may be a serious and life-threatening complication of ischemic stroke.”

Another significant aspect was the finding that autophagy — a mechanism involving cell degradation of unnecessary or dysfunctional cellular components –plays a role in the subacute phase of ischemia. Study results showed that accumulation of numerous autophagosomes within endothelial cells in microvessels of both initially damaged and non-injured brain areas might be closely associated with BBB damage.

Autophagy is a complex but normal process usually aimed at “self-removing” damaged cell components to promote cell survival. It was unclear, however, whether the role of autophagy in subacute post-ischemia was promoting cell survival or cell death.

More than 30 percent of patients who survive strokes develop dementia within two years, the researchers noted.

“Although dementia is complex, vascular damage in post-stroke patients is a significant risk factor, depending on the severity, volume and site of the stroke,” said study co-author Dr. Paul Sanberg, USF senior vice president for research and innovation. “Ischemic stroke might initiate neurodegenerative dementia, particularly in the aging population.”

The researchers conclude that repair of the BBB following ischemic stroke could potentially prevent further degradation of surviving neurons.

“Recognizing that the BBB is a therapeutic target is important for developing neuroprotective strategies,” they said.

Notes about this neurobiology and stroke research