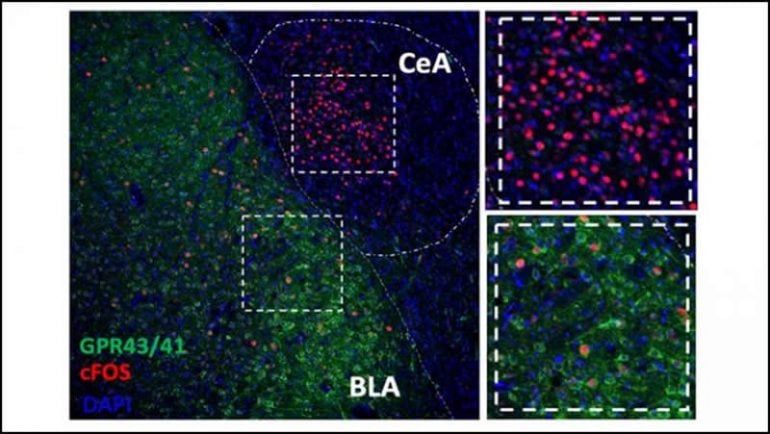 Confocal microscopy image of neurons activated during withdrawal from oxycodone in the central amygdala (CeA) and basolateral amygdala (BLA). Cell nuclei are labeled in blue (DAPI), activated neurons (cFOS) are labeled in red, and receptors for microbiome metabolites, GPR41/43,are labeled in the green channel. Image is credited to Simpson et al., eNeuro 2020.

Summary: Researchers administered antibiotics to rats for two weeks, depleting their gut microbiome. They then administered oxycodone. Compared to rats given only the opioid, those given the antibiotics had profound changes in how their brains responded to the pain killers.

Taking antibiotics alongside opioids may increase the risk of opioid abuse, according to research in rats recently published in eNeuro.

Opioid abuse and addiction plague over 2 million Americans. Many factors play a role in the opioid crisis, but one may have a larger role than previously thought: the gut microbiome. The world of bacteria in the gut influences brain health and plays a role in a slew of brain disorders, including addiction.

After surgery, doctors typically prescribe both opioids and antibiotics to treat pain while fighting off infection. This strategy also kills bacteria in the microbiome. Simpson et al. decided to explore the relationship of the two drugs given the prevalence of the combination.

The team administered antibiotics to rats for two weeks, depleting their gut microbiome, and then gave them the opioid oxycodone. Compared to rats that only received oxycodone, the microbiome-depleted rats displayed profound changes in how their brains responded to opioids. The rats showed altered opioid sensitivity in brain areas implicated in addiction: the depleted microbiome exacerbated the effects of intoxication and weakened the effects of withdrawal.

Substance use disorders have a complex etiology. Genetics, the environment, and behavior all play a role in the initiation, escalation, and relapse of drug use. Recently, opioid use disorder has become a national health crisis. One aspect of opioid addiction that has yet to be fully examined is the effects of alterations of the microbiome and gut-brain axis signaling on central nervous system activity during opioid intoxication and withdrawal. The effect of microbiome depletion on the activation of neuronal ensembles was measured by detecting Fos-positive (Fos+) neuron activation during intoxication and withdrawal using a rat model of oxycodone dependence. Daily oxycodone administration (2 mg/kg) increased pain thresholds and increased Fos+ neurons in the basolateral amygdala during intoxication, with a decrease in pain thresholds and increase in Fos+ neurons in the periaqueductal gray, central nucleus of the amygdala, locus coeruleus, paraventricular nucleus of the thalamus, agranular insular cortex, bed nucleus of the stria terminalis, and lateral habenula medial parvocellular region during withdrawal. Microbiome depletion produced widespread but region- and state-specific changes in neuronal ensemble activation. Oxycodone intoxication and withdrawal also increased functional connectivity among brain regions. Microbiome depletion resulted in a decorrelation of this functional network. These data indicate that microbiome depletion by antibiotics produces widespread changes in the recruitment of neuronal ensembles that are activated by oxycodone intoxication and withdrawal, suggesting that the gut microbiome may play a role in opioid use and dependence. Future studies are needed to better understand the molecular, neurobiological, and behavioral effects of microbiome depletion on addiction-like behaviors.

The United States is currently experiencing a national opioid crisis. Opioids alter the microbiome by reducing gut motility. They are often concurrently prescribed with antibiotics, which further reduces the richness and diversity of the resident microbiome. The gut-brain axis has recently emerged as a significant contributor to stress and behavioral alterations, but it has not been explored with regard to opioid use disorder. The present study found that depletion of the microbiome produced widespread region- and state-specific changes in neuronal ensemble activation. Importantly, neuronal ensembles that were altered by antibiotic depletion were in regions of the brain that are involved in opioid use disorder in both intoxication and withdrawal states. These results represent an important advance in our understanding of the impact of the gut-brain axis on neuronal recruitment in different drug states and how the microbiome may play a role in opioid use and dependence.

More to Pictures Than Meets the Eye