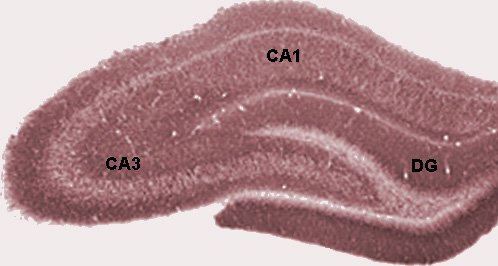 Researchers noted significant cell death in the dentate gyrus of juvenile mice after exposure to isoflurane, a widely used anesthetic. The image shows the location of the dentate gyrus, marked as DG, in the hippocampal region.
Home
Featured

Study Expands Concerns About Anesthesia’s Impact on the Brain

As pediatric specialists become increasingly aware that surgical anesthesia may have lasting effects on the developing brains of young children, new research suggests the threat may also apply to adult brains.

Researchers from Cincinnati Children’s Hospital Medical Center report June 5 the Annals of Neurology that testing in laboratory mice shows anesthesia’s neurotoxic effects depend on the age of brain neurons – not the age of the animal undergoing anesthesia, as once thought.

Although more research is needed to confirm the study’s relevance to humans, the study suggests possible health implications for millions of children and adults who undergo surgical anesthesia annually, according to Andreas Loepke, MD, PhD, a physician and researcher in the Department of Anesthesiology.

“We demonstrate that anesthesia-induced cell death in neurons is not limited to the immature brain, as previously believed,” said Loepke. “Instead, vulnerability seems to target neurons of a certain age and maturational stage. This finding brings us a step closer to understanding the phenomenon’s underlying mechanism”

New neurons are generated abundantly in most regions of the very young brain, explaining why previous research has focused on that developmental stage. In a mature brain, neuron formation slows considerably, but extends into later life in dentate gyrus and olfactory bulb.

The dentate gyrus, which helps control learning and memory, is the region Loepke and his research colleagues paid particular attention to in their study. Also collaborating were researchers from the University of Cincinnati College of Medicine and the Children’s Hospital of Fudan University, Shanghai, China.

Researchers exposed newborn, juvenile and young adult mice to a widely used anesthetic called isoflurane in doses approximating those used in surgical practice. Newborn mice exhibited widespread neuronal loss in forebrain structures – confirming previous research – with no significant impact on the dentate gyrus. However, the effect in juvenile mice was reversed, with minimal neuronal impact in the forebrain regions and significant cell death in the dentate gyrus.
The team then performed extensive studies to discover that age and maturational stage of the affected neurons were the defining characteristics for vulnerability to anesthesia-induced neuronal cell death. The researchers observed similar results in young adult mice as well.

Research over the past 10 years has made it increasingly clear that commonly used anesthetics increase brain cell death in developing animals, raising concerns from the Food and Drug Administration, clinicians, neuroscientists and the public. As well, several follow-up studies in children and adults who have undergone surgical anesthesia show a link to learning and memory impairment.

Cautioning against immediate application of the current study’s findings to children and adults undergoing anesthesia, Loepke said his research team is trying to learn enough about anesthesia’s impact on brain chemistry to develop protective therapeutic strategies, in case they are needed. To this end, their next step is to identify specific molecular processes triggered by anesthesia that lead to brain cell death.

“Surgery is often vital to save lives or maintain quality of life and usually cannot be performed without general anesthesia,” Loepke said. “Physicians should carefully discuss with patients, parents and caretakers the risks and benefits of procedures requiring anesthetics, as well as the known risks of not treating certain conditions.”
Loepke is also collaborating with researchers from the Pediatric Neuroimaging Research Consortium at Cincinnati Children’s Hospital Medical Center to examine anesthesia’s impact on children’s brain using non-invasive magnetic resonance imaging (MRI) technology.

Notes about this anesthesia and neurology research

The current study was funded in part by grants from The Center for Clinical and Translational Science and Training at the University of Cincinnati, the Foundation for Anesthesia Education and Research and the Masimo Foundation.