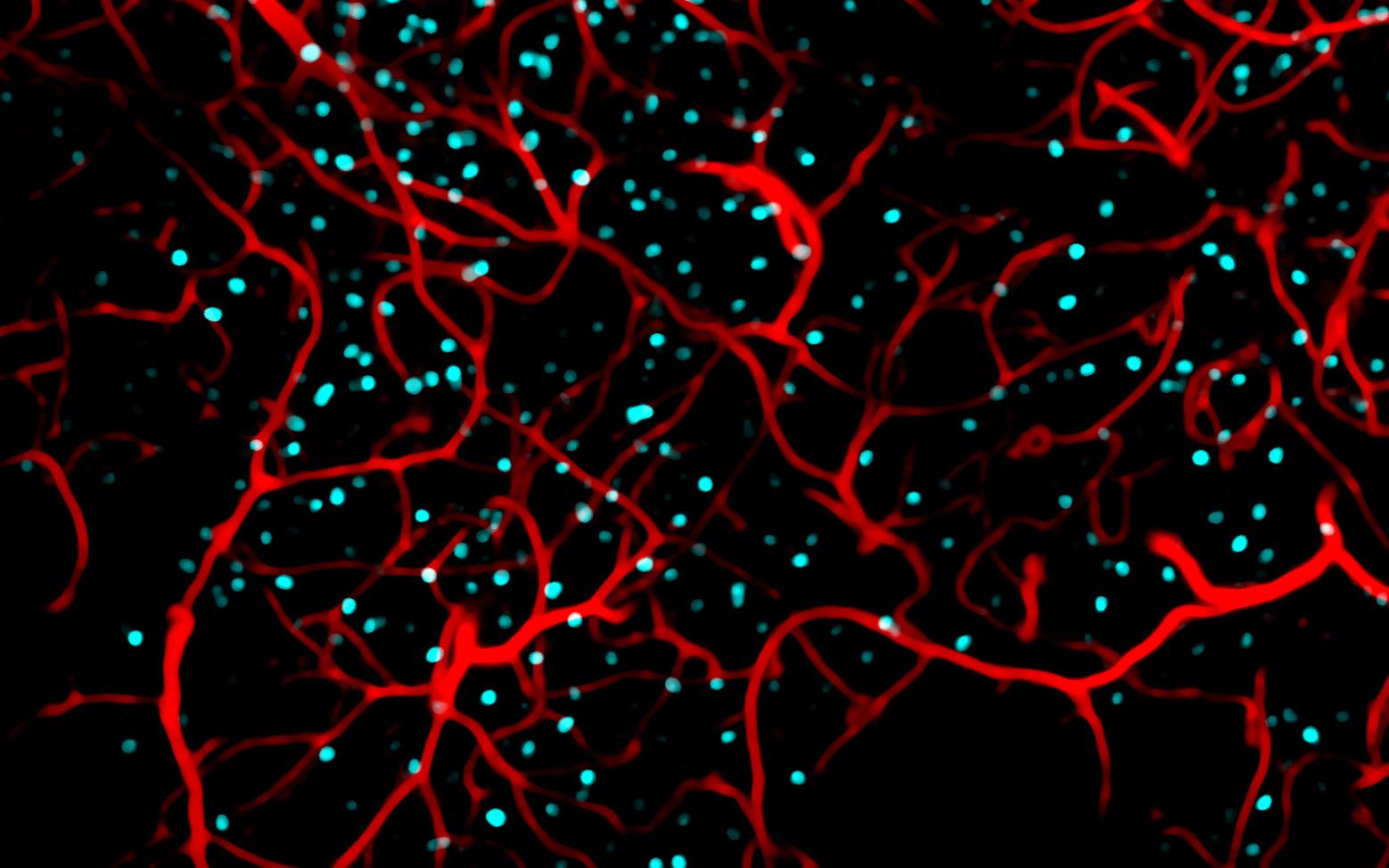 Using a special microscopy method, DZNE researchers were able to follow the activiy of neurons in the hippocampus of mice. The image shows nerve cells in cyan and blood vessels in red in hippocampal tissue. Image is credited to DZNE/Stefanie Poll.

Neurons that are responsible for new experiences interfere with the signals of neurons that contain memories and thereby disturb the recall of memories – at least in mice. The research group of Martin Fuhrmann of the German Center for Neurodegenerative Diseases (DZNE) reports this phenomenon in the scientific journal “Nature Neuroscience”. The results of this study potentially shed new light on memory impairment in Alzheimer’s disease.

The hippocampus is a brain region responsible for memories and is early affected during Alzheimer’s disease. Neurons in the hippocampus respond to our experiences and build networks to store these memories. Thereby, experiences and learned content can be recalled: we can for example remember our way home or to work. Individuals suffering from dementia have problems retrieving this kind of memories – as a specific region in the hippocampus, the so-called CA1 area, responsible for spatial memory, is strongly affected by Alzheimer pathology. So far it was thought that neurons that “contain” a memory are impaired by the disease in a way that they fail to be reactivated and eventually lose the memory. Apparently, the process of forgetting during Alzheimer’s disease – at least in a mouse model – works in a different way: a research group at the DZNE investigated mice with similar protein deposits in their brains (so-called amyloid-beta plaques) as people with Alzheimer’s disease. The deposits resulted in symptoms in these mice similar to those seen in Alzheimer’s disease. The researchers found that the neurons responsible for the memory were still active in the diseased mice. However, recall of the memory failed.

Signals of other neurons interfere with the memory

“The reason is novel experience encoding neurons disturbing the signals of memory-containing neurons and superimposing them with their signal”, says Dr. Martin Fuhrmann, group leader at the DZNE. “It is like a noisy TV signal: the picture becomes diffuse and distorted; you might even see pixels or stripes. Something similar happened inside the mice’s brain: Interfering signals suppressed their memories. This disturbance is obviously a result of the pathological changes in the brain.”

When healthy mice remember a situation, like learning a new path or exploring a novel environment, the neuronal network will be reactivated that was active during encoding the initial experience. To find out what actually happens to this neuronal network, the researchers performed an experiment: They let healthy, as well as mice with Alzheimer-like pathology explore a novel environment. With the help of a special microscopy method – two-photon in vivo microscopy – the researchers were able to follow the activity of individual neurons in the hippocampus. When the mice were exposed to the very same environment a few days later both groups behaved differently: the healthy mice remembered the environment; mice with Alzheimer-like pathology did not. They explored the environment as if it was their first experience. This was accompanied by differences in brain activity. Dr. Stefanie Poll, postdoc in the lab of Martin Fuhrmann and first author of this study explained: “In the diseased mice we not only found active neurons encoding the memory, but also a group of active neurons that contained novel environmental information. The signal of these novelty-containing neurons caused a superimposition disturbing signal of the memory encoding neurons.”

To verify this, the researchers employed a technique based on the combination of chemical molecules and genetics: “chemogenetics”. Thereby, neurons encoding novelty were made responsive to a specific chemical molecule. “Applying this molecule, we were able to modulate the activity of these neurons. It works like a switch, the molecule presses the switch”, says Stefanie Poll.

On and off switching of novelty-containing neurons

“Like that we were able to specifically target neurons encoding novel information and switch these neurons on and off – controlling their activity”, explains Martin Fuhrmann. “In the diseased mice we switched these neurons off, in the healthy group we did the opposite.” Thereby, it was possible to on the one hand to reduce and on the other hand to induce the disturbing noise artificially.” This was evident in the mice’s behavior: “Mice with Alzheimer-like pathology now recognized the environment again, their memory was restored. The memory of healthy mice, however, was impaired by the artificial noise”, says Stefanie Poll.

“The results of this study indicate a previously unknown mechanism that may contribute to the memory impairment in Alzheimer’s disease”, explains Martin Fuhrmann. “Imagining future therapies, we might be able to rescue memories of individuals suffering from Alzheimer’s disease or other diseases impacting memory recall. We might achieve this by lowering the activity of these noise-inducing neurons with future methods. Furthermore, it could be possibly helpful for individuals suffering from post-traumatic stress disorders. Here, noise-inducing neurons could be artificially activated to interfere with the traumatic memory aiming to overwrite it. The remaining question, whether our results can be translated to humans, has to be answered by future studies.”

In Alzheimer’s disease (AD), hippocampus-dependent memories underlie an extensive decline. The neuronal ensemble encoding a memory, termed engram, is partially recapitulated during memory recall. Artificial activation of an engram can restore memory in a mouse model of early AD, but its fate and the factors that render the engram nonfunctional are yet to be revealed. Here, we used repeated two-photon in vivo imaging to analyze fosGFP transgenic mice (which express enhanced GFP under the Fos promoter) performing a hippocampus-dependent memory task. We found that partial reactivation of the CA1 engram during recall is preserved under AD-like conditions. However, we identified a novelty-like ensemble that interfered with the engram and thus compromised recall. Mimicking a novelty-like ensemble in healthy mice was sufficient to affect memory recall. In turn, reducing the novelty-like signal rescued the recall impairment under AD-like conditions. These findings suggest a novel mechanistic process that contributes to the deterioration of memories in AD.