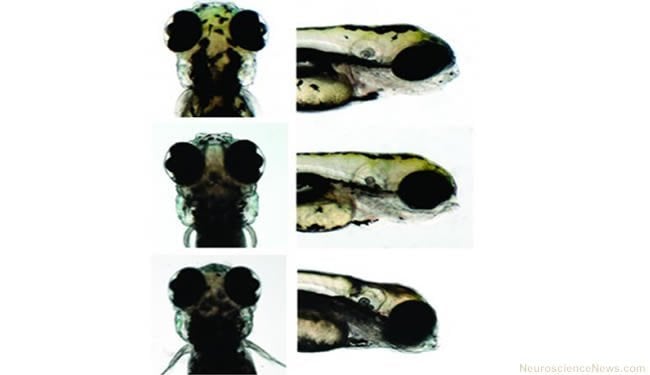 What can a fish tell us about human brain development? Researchers at Duke University Medical Center transplanted a set of human genes into a zebrafish and then used it to identify genes responsible for head size at birth.

Researchers at Duke University Medical Center transplanted a set of human genes into a zebrafish and then used it to identify genes responsible for head size at birth.

Head size in human babies is a feature that is related to autism, a condition that recent figures have shown to be more common than previously reported, 1 in 88 children in a March 2012 study. Head size is also a feature of other major neurological disorders, such as schizophrenia.

“In medical research, we need to dissect events in biology so we can understand the precise mechanisms that give rise to neurodevelopmental traits,” said senior author Nicholas Katsanis, Ph.D., Jean and George Brumley Jr., MD, Professor of Developmental Biology, and Professor of Pediatrics and Cell Biology. “We need expert scientists to work side by side with clinicians who see such anatomic and other problems in patients, if we are to effectively solve many of our medical problems.”

The study was published online in Nature journal on May 16.

Katsanis knew that a region on chromosome 16 was one of the largest genetic contributors to autism and schizophrenia, but a conversation at a European medical meeting pointed him to information that changes within that same region of the genome also were related to changes in a newborn’s head size.

The problem was difficult to address because the region had large deletions and duplications in DNA, which are the most common mutational mechanisms in humans. “Interpretation is harrowingly hard,” said Katsanis, who is also director of the Duke Center for Human Disease Modeling.

The reason is that a duplication of DNA or missing DNA usually involves several genes. “It is very difficult to go from ‘here is a region with many genes, sometimes over 50’ to ‘these are the genes that are driving this pathology,'” Katsanis said.

“There was a light bulb moment,” Katsanis said. “The area of the genome we were exploring gave rise to reciprocal (opposite) defects in terms of brain cell growth, so we realized that overexpressing a gene in question might give one phenotype – a smaller head, while shutting down the same gene might yield the other, a larger head.”

The researchers transplanted a common duplication area of human chromosome 16 known to contain 29 genes into zebrafish embryos and then systematically turned up the activity of each transplanted human gene to find which might cause a small head (microcephaly) in the fish. They then suppressed the same gene set and asked whether any of them caused the reciprocal defect: larger heads (macrocephaly).

The researchers knew that deletion of the region that contained these 29 genes occurred in 1.7% of children with autism.

It took the team a few months to dissect such a “copy number variant” – an alteration of the genome that results in an abnormal number of one or more sections of chromosomal DNA.

“Now we can go from a genetic finding that is dosage-sensitive and start asking reasonable questions about this gene as it pertains to neurocognitive traits, which is a big leap,” Katsanis said. Neurocognitive refers to the ability to think, concentrate, reason, remember, process information, learn, understand and speak.

Many human conditions have anatomical features that are also related to genetics, he said. “There are major limitations in studying autistic or schizophrenic behavior in zebrafish, but we can measure head size, jaw size, or facial abnormalities.”

The single gene in question, KCTD13, is responsible for driving head size in zebrafish by regulating the creation and destruction of new neurons (brain cells). This discovery let the team focus on the analogous gene in humans. “This gene contributes to autism cases, and probably is associated with schizophrenia and also childhood obesity,” Katsanis said.

Once the gene has been uncovered, researchers can examine the protein it produces. “Once you have the protein, you can start asking valuable functional questions and learning what the gene does in the animal or human,” Katsanis said.

Copy number variants, such as the ones this team found on chromosome 16, are now thought to be one of the most common sources of genetic mutations. Hundreds, if not thousands, of such chromosomal deletions and duplications have been found in patients with a broad range of clinical problems, particularly neurodevelopmental disorders.

“Now we may have an efficient tool for dissecting them, which gives us the ability to improve both diagnosis and understanding of disease mechanisms,” Katsanis said.

The current study suggests that KCTD13 is a major contributor to some cases of autism, but also points to the synergistic action of this gene with two other genes in the region, named MVP and MAPK3, Katsanis said.