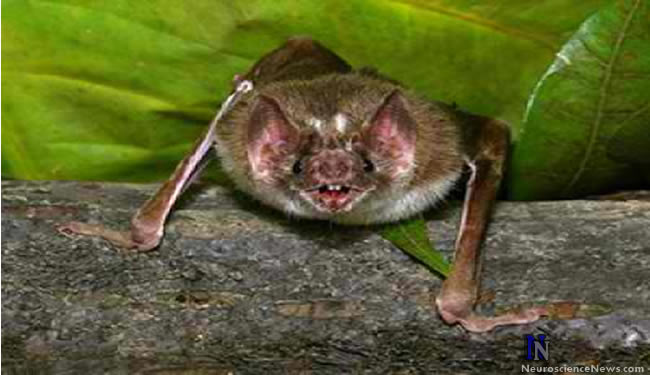 What Steers Vampires to Blood?

Scientists have known for years that when vampire bats tear through an animal’s skin with their razor-sharp teeth, their noses guide them to the best spots – where a precise bite will strike a vein and spill forth nourishing blood. But nobody knew exactly how bats knew where to bite.

By investigating wild vampire bats in South America, researchers at the University of California, San Francisco and Instituto Venezolano de Investigaciones Científicas in Caracas, Venezuela have discovered their secret: a sensitive, heat-detecting molecule covering nerve endings on their noses called TRPV1. A number of pharmaceutical and biotech companies are working on developing new pain medications that target molecules like TRPV1.

“Vampire bats feed on blood, and it’s useful for them to have an infrared detector to be able to find the circulation,” said David Julius, PhD, the Morris Herzstein Chair in Molecular Biology & Medicine at UCSF, who led the research.

Similar TRPV1 molecules can be found on pain sensing nerve fibers in human tongue, skin or eyes. They allow people to detect the chemical capsaicin in chili peppers and experience the burning tinge of spicy food.

Described this week in the journal Nature, the discovery highlights how small changes to genes in the genome of a species can contribute to major evolutionary adaptations over time – in this case, allowing the vampire bat to detect infrared heat from their prey, helping them efficiently find and feed on blood.

The work also adds a piece to a larger puzzle related to human health and drug design because these same molecules are involved in pain sensation, such as that associated with touching a hot object, or hypersensitivity to heat after injury and inflammation – as occurs with sunburn.

“There is a double-edged sword with pain,” Julius said. “Pain is necessary as a warning system to let us know when we are in danger of injury but, at the same time, pain can outlive its usefulness as a warning system when it fails to resolve and becomes chronic and debilitating.”

Sensory Nerves – How the Brain Experiences the World

The human brain does not connect directly with the world but instead floats secluded in a protective bubble of cerebrospinal fluid within the skull. All the information the brain receives about Earthly sights, smells, textures, and tastes comes through long nerve fibers that make up the body’s sensory system, which connect the brain with our eyes, noses, fingers and tongues.

At the ends of these nerve fibers, cues that give life to our perception of the world are collected. Tiny molecular channels covering these nerve endings can alternatively open or close if they perceive the proper stimulus from a chemical, heat, cold or the pressure of touch. When they do, and when the right balance of openings and closings occurs all over a nerve ending, that nerve will fire, sending a signal to the brain that says “hot” or “cold” or “hard” or “bitter” or “pretty”? (something for taste and sight) depending on the type of stimulus.

This basic physiology informs our awareness and also warns our brains about noxious dangers of the world. Painful stimuli signal danger to the brain and cause us to wince, squint, gasp or otherwise pull away to protect ourselves.

“There is a lot of stuff in our environment that we want to stay away from,” Julius said.

TRPV1, one of these sensory system channels, does belong to a large family of similar molecules common to many types of animals but they differ slightly from animal to animal – both in terms of their DNA and in terms of where they appear in the body.

Subtle changes to these molecules contribute to highly specialized physiologies for sensing the world. Many animals have highly specialized adaptations allowing them to see, feel, hear or taste in special ways. The heat-sensing molecules within vampire bat noses is one example.

Vampire Bats Run like Horses and Feed on Cows

In appearance, the furry, bean-shaped bat with its rodent-like face resembles a rat with wings, but bats are actually more closely related in evolution to dogs and horses. In fact, vampire bats in the wild will gallop and leap across the ground much in the same way that horses do.

In South American where they are common, vampire bats approach their prey on the ground, galloping quickly and quietly as they sneak up on, bite, and drink the blood from sleeping cows, goats and birds.

Eavesdropping on Communication Between Fat and Brain

Vampire bats are the only known mammal that survives solely on blood, and they need to drink it pretty much every day to survive. They support this need through a number of evolutionary adaptations.

Like other bats, they feed only at night, and they have excellent eyesight enhanced by acute hearing and an ability to emit high-pitched sounds that help them navigate. Their teeth lack enamel, which keeps them constantly razor sharp and allows them to delicately tear through the hide of a sleeping animal without waking it. Grooves in their tongue draw up the blood seeping through the open wound through capillary action, and they have anticoagulation chemicals inside their saliva to keep it flowing.

Within minutes of sinking its teeth in an animal’s flesh, an adult vampire bat can drink half its body weight in blood. But first they must find a vein, helped by it’s a major adaptations: heat-sensing ability, which allows them to “see” a vein at night.

Researchers have known for years that pits on vampire bats’ noses allow them to detect blood vessels because they radiate heat. But no one knew exactly how this occurred.

They also determined that it was not just TRPV1 but an evolutionary genetic variation of it that allows vampire bats to detect low temperature heat. Through a mechanism known as “alternative splicing” a special form of the molecule emerged in the noses of the bats, becoming a sensitive detector for finding the hottest spots.

This work was supported by funding from the National Institutes of Health and the Howard Hughes Medical Institute. Additional support was provided by a Ruth L. Kirschstein National Research Service Award and a Pathway to Independence Fellowship from the UCSF Cardiovascular Research Institute. David Julius is on the advisory board of Hydra Biosciences, Inc., which is investigating potential drugs that target molecules like TRPV1.