What Happens in the Brain During Unconsciousness?

Summary: Researchers investigate how brain networks fragment while under a variety of unconscious states.

When patients undergo major surgery, they’re often put under anesthesia to allow the brain to be in an unconscious state.

But what’s happening in the brain during that time?

Three Michigan Medicine researchers are authors on three new articles from the Center for Consciousness Science exploring this question — specifically how brain networks fragment in association with a variety of unconsciousness states.

“These studies come from a long-standing hypothesis my colleagues and I have had regarding the essential characteristic of why we are conscious and how we become unconscious, based on patterns of information transfer in the brain,” says George A. Mashour, M.D., Ph.D., professor of anesthesiology, director of the Center for Consciousness Science and associate dean for clinical and translational research at the University of Michigan Medical School.

In the studies, the team not only explores how the brain networks fragment, but also how better to measure what is happening.

“We’ve been working for a decade to understand in a more refined way how the spatial and temporal aspects of brain function break down during unconsciousness, how we can measure that breakdown and the implications for information processing,” says UnCheol Lee, Ph.D., physicist, assistant professor of anesthesiology and associate director of the Center for Consciousness Science.

The basis for the three studies, as well as other work from the Center for Consciousness Science, comes from a theory Mashour produced during his residency.

“I published a theoretical article when I was a resident in anesthesiology suggesting that anesthesia doesn’t work by turning the brain off, per se, but rather by isolating processes in certain areas of the brain,” Mashour says. “Instead of seeing a highly connected brain network, anesthesia results in an array of islands with isolated cognition and processing. We have taken this thought, as well as the work of others, and built upon it with our research.”

In the study in the Journal of Neuroscience, the team analyzed different areas of the brain during sedation, surgical anesthesia and a vegetative state.

“It’s often suggested that different areas of the brain that typically talk to one another get out of sync during unconsciousness,” says Anthony Hudetz, Ph.D., professor of anesthesiology, scientific director of the Center for Consciousness Science and senior author on the study. “We showed in the early stages of sedation, the information processing timeline gets much longer and local areas of the brain become more tightly connected within themselves. That tightening might lead to the inability to connect with distant areas.”

In the Frontiers in Human Neuroscience study, the team delved into how the brain integrates information and how it can be measured in the real world. 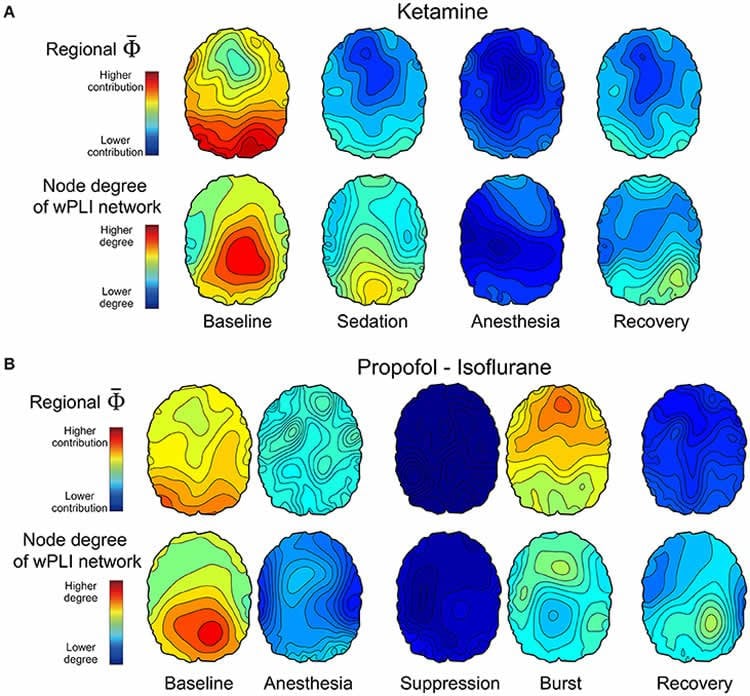 Topographic structures of Φ¯¯¯¯RΦ¯R and EEG connectivity of the alpha band across states of consciousness in the two anesthetic experiments of (A) ketamine, and (B) propofol followed by isoflurane. The first and second row in (A,B) present the topography structure of Φ¯¯¯¯RΦ¯R and node degree of 96 EEG channels, respectively, which is averaged over all subjects across states. The topographical structures and the overall strengths represent various states of consciousness. For example, higher Φ¯¯¯¯RΦ¯R and node degree of the posterior region in the baseline state is disrupted in the anesthetized state and restored partly with recovery of responsiveness. The scales of Φ¯¯¯¯RΦ¯R and node degree topographies are the same among the states in each experiment, but different between the two experiments. The topographies of node degree and Φ¯¯¯¯RΦ¯R for the other frequency bands are presented in Supplementary Figure 4. NeuroscienceNews.com image is credited to Mashour et al./Frontiers in Human Neuroscience.

“We took a very complex computational task of measuring information integration in the brain and broke it down into a more manageable task,” says Lee, senior author on the study. “We demonstrated that as the brain gets more modular and has more local conversations, the measure of information integration starts to decrease. Essentially, we looked at how the brain network fragmentation was taking place and how to measure that fragmentation, which gives us the sense of why we lose consciousness.”

Finally, the latest article, in Trends in Neurosciences, aimed to take the team’s previous studies and other work on the subject of unconsciousness and put together a fuller picture.

“We examined unconsciousness across three different conditions: physiological, pharmacological and pathological,” says Mashour, lead author on the study. “We found that during unconsciousness, disrupted connectivity in the brain and greater modularity are creating an environment that is inhospitable to the kind of efficient information transfer that is required for consciousness.”

How these studies can help patients

The team members at the Center for Consciousness Science note that all of this work may help patients in the future.

“We’re looking for a better way to quantify the depth of anesthesia in the operating room and to assess consciousness in someone who has had a stroke or brain damage,” Hudetz says. “For example, we may assume that a patient is fully unconscious based on behavior, but in some cases consciousness can persist despite unresponsiveness.”

The team hopes this and future research could lead to therapeutic strategies for patients.

“We want to understand the communication breakdown that occurs in the brain during unconsciousness so we can precisely target or monitor these circuits to achieve safer anesthesia and restore these circuits to improve outcomes of coma,” Mashour says.

Other University of Michigan authors on the studies include Zirui Huang, Ph.D., and HyoungKyu Kim, Ph.D., postdoctoral fellows in the Center for Consciousness Science.

Sleep, general anesthesia, and disorders of consciousness are characterized by disrupted functional connectivity as well as a constrained repertoire of functional states.

Unconsciousness is characterized by decreased network efficiency and increased modularity.

Cortical dynamics are stabilized during unconsciousness.

During unconsciousness, disrupted connectivity, reduced efficiency, and a constrained repertoire of dynamic states create inhospitable conditions for information transmission and integration, which is likely required for normal consciousness.

The biological basis of consciousness is one of the most challenging and fundamental questions in 21st century science. A related pursuit aims to identify the neural correlates and causes of unconsciousness. We review current trends in the investigation of physiological, pharmacological, and pathological states of unconsciousness at the level of large-scale functional brain networks. We focus on the roles of brain connectivity, repertoire, graph-theoretical techniques, and neural dynamics in understanding the functional brain disconnections and reduced complexity that appear to characterize these states. Persistent questions in the field, such as distinguishing true correlates, linking neural scales, and understanding differential recovery patterns, are also addressed.

The integrated information theory (IIT) proposes a quantitative measure, denoted as Φ, of the amount of integrated information in a physical system, which is postulated to have an identity relationship with consciousness. IIT predicts that the value of Φ estimated from brain activities represents the level of consciousness across phylogeny and functional states. Practical limitations, such as the explosive computational demands required to estimate Φ for real systems, have hindered its application to the brain and raised questions about the utility of IIT in general. To achieve practical relevance for studying the human brain, it will be beneficial to establish the reliable estimation of Φ from multichannel electroencephalogram (EEG) and define the relationship of Φ to EEG properties conventionally used to define states of consciousness. In this study, we introduce a practical method to estimate Φ from high-density (128-channel) EEG and determine the contribution of each channel to Φ. We examine the correlation of power, frequency, functional connectivity, and modularity of EEG with regional Φ in various states of consciousness as modulated by diverse anesthetics. We find that our approximation of Φ alone is insufficient to discriminate certain states of anesthesia. However, a multi-dimensional parameter space extended by four parameters related to Φ and EEG connectivity is able to differentiate all states of consciousness. The association of Φ with EEG connectivity during clinically defined anesthetic states represents a new practical approach to the application of IIT, which may be used to characterize various physiological (sleep), pharmacological (anesthesia), and pathological (coma) states of consciousness in the human brain.

Environmental events are processed on multiple timescales via hierarchical organization of temporal receptive windows (TRWs) in the brain. The dependence of neural timescales and TRWs on altered states of consciousness is unclear. States of reduced consciousness are marked by a shift toward slowing of neural dynamics (<1 Hz) in EEG/ECoG signals. We hypothesize that such prolongation of intrinsic timescales are also seen in blood-oxygen-level dependent (BOLD) signals. To test this hypothesis, we measured the timescales of intrinsic BOLD signals using mean frequency (MF) and temporal autocorrelation (AC) in healthy volunteers (n=23; male/female 14/9) during graded sedation with propofol. We further examined the relationship between the intrinsic timescales (local/voxel level) and its regional connectivity (across neighboring voxels; ReHo), global (whole brain level) distant functional connectivity (GFC) and topographical similarity (Topo). Additional results were obtained from patients undergoing deep general anesthesia (n=12; male/female: 5/7) and in patients with disorders of consciousness (n=21; male/female: 14/7). We found that MF, AC and ReHo increased, whereas GFC and Topo decreased during propofol sedation. The local alterations occur prior to changes of distant connectivity. Conversely, all these parameters decreased in deep anesthesia and in patients with disorders of consciousness. We conclude that propofol synchronizes local neuronal interactions and prolongs the timescales of intrinsic BOLD signals. These effects may impede communication among distant brain regions. Furthermore, the intrinsic timescales exhibit distinct dynamic signatures in sedation, deep anesthesia, and disorders of consciousness. These results improve our understanding of the neural mechanisms of unconsciousness in pharmacologic and neuropathologic states.

Information processing in the brain occurs through a hierarchy of temporal receptive windows (TRWs) in multiple timescales. Anesthetic drugs induce a reversible suppression of consciousness and thus offer a unique opportunity to investigate the state-dependence of neural timescales. Here we demonstrate for the first time that sedation with propofol is accompanied by the prolongation of the timescales of intrinsic BOLD signals presumably reflecting enlarged TRWs. We show that this is accomplished by an increase of local and regional signal synchronization – effects that may disrupt information exchange among distant brain regions. Furthermore, we show that the timescales of intrinsic BOLD signals exhibit distinct dynamic signatures in sedation, deep anesthesia, and disorders of consciousness.