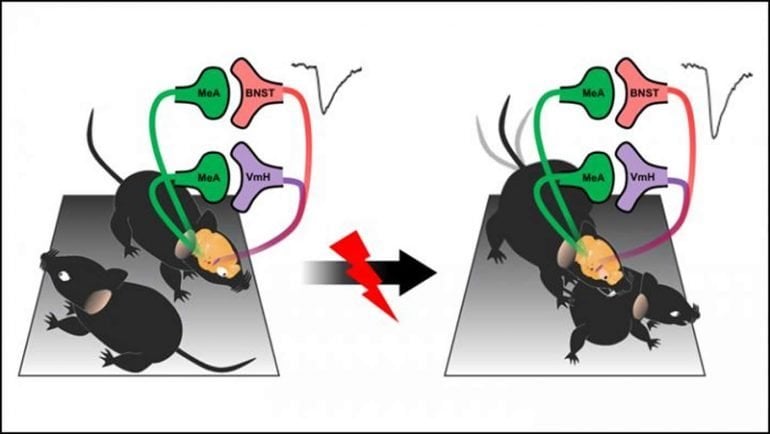 Summary: Strengthened amygdala pathways increase aggression in those who have experienced trauma. The findings could lead to new treatments for PTSD.

Traumatic stress can cause aggression by strengthening two brain pathways involved in emotion, according to research recently published in Journal of Neuroscience. Targeting those pathways via deep brain stimulation may stymie aggression associated with post-traumatic stress disorder.

The consequences of traumatic stress linger long after the stress ends. People suffering from post-traumatic stress disorder often display heightened aggression, caused by unknown changes in the amygdala. An almond-shaped structure nestled deep inside the brain, the amygdala plays an essential role in emotion, social behaviors, and aggression.

Nordman et al. examined how different amygdala circuits changed in male mice after traumatic stress. Two connections strengthened, resulting in more attacks on other mice: the circuitry connecting the amygdala to the ventromedial hypothalamus and the bed nucleus of the stria terminalis. The former modulates the frequency of attacks, while the latter controls the length of attacks. The research team then used low frequencies of light to stop the pathways from strengthening, preventing an increase in aggressive behavior. Deep brain stimulation may elicit the same effect in humans.

Recurring and excessive violence and aggression are serious concerns for the individual and society at large and is a symptom of many psychiatric illnesses such as PTSD. The circuit and synaptic mechanisms underlying experience-induced aggression escalation, however, are poorly understood. Here we find that prior attack experience leading to an increase in aggressive behavior, known as aggression priming, activates neurons within the posterior ventral segment of the medial amygdala (MeApv). Optogenetic stimulation of MeApv using a synaptic depression protocol suppresses aggression priming, while high frequency stimulation enhances aggression, mimicking attack experience. Interrogation of the underlying neural circuitry revealed that the MeApv mediates aggression priming via synaptic connections with the ventromedial hypothalamus (VmH) and bed nucleus of the stria terminalis (BNST). These pathways undergo NMDA-receptor-dependent synaptic potentiation after attack. Furthermore, we find that the MeApv–VmH synapses selectively control attack duration, while the MeApv–BNST synapses modulate attack frequency, both with no effect on social behavior. Synaptic potentiation of the MeApv–VmH and MeApv–BNST pathways contributes to excessive aggression induced by traumatic stress, and weakening synaptic transmission at these synapses blocks the effect of traumatic stress on aggression. These results reveal a circuit and synaptic basis for aggression modulation by experience that can be potentially leveraged towards clinical interventions.

Escalating aggression and violence have devastating social consequences and are associated with psychiatric disorders such as PTSD. The circuit and synaptic mechanisms underlying experience-induced aggression escalation, however, are poorly understood. Here we identify two aggression pathways between the posterior ventral segment of the medial amygdala (MeApv) and its downstream synaptic partners, the ventromedial hypothalamus (VmH) and bed nucleus of the stria terminalis (BNST) that undergo synaptic potentiation after attack and traumatic stress to enhance aggression. Notably, weakening synaptic transmission in these circuits blocks aggression priming, naturally occurring aggression, and traumatic-stress-induced excessive aggression. These results illustrate a circuit and synaptic basis of aggression modulation by experience, which can be potentially targeted for clinical interventions.