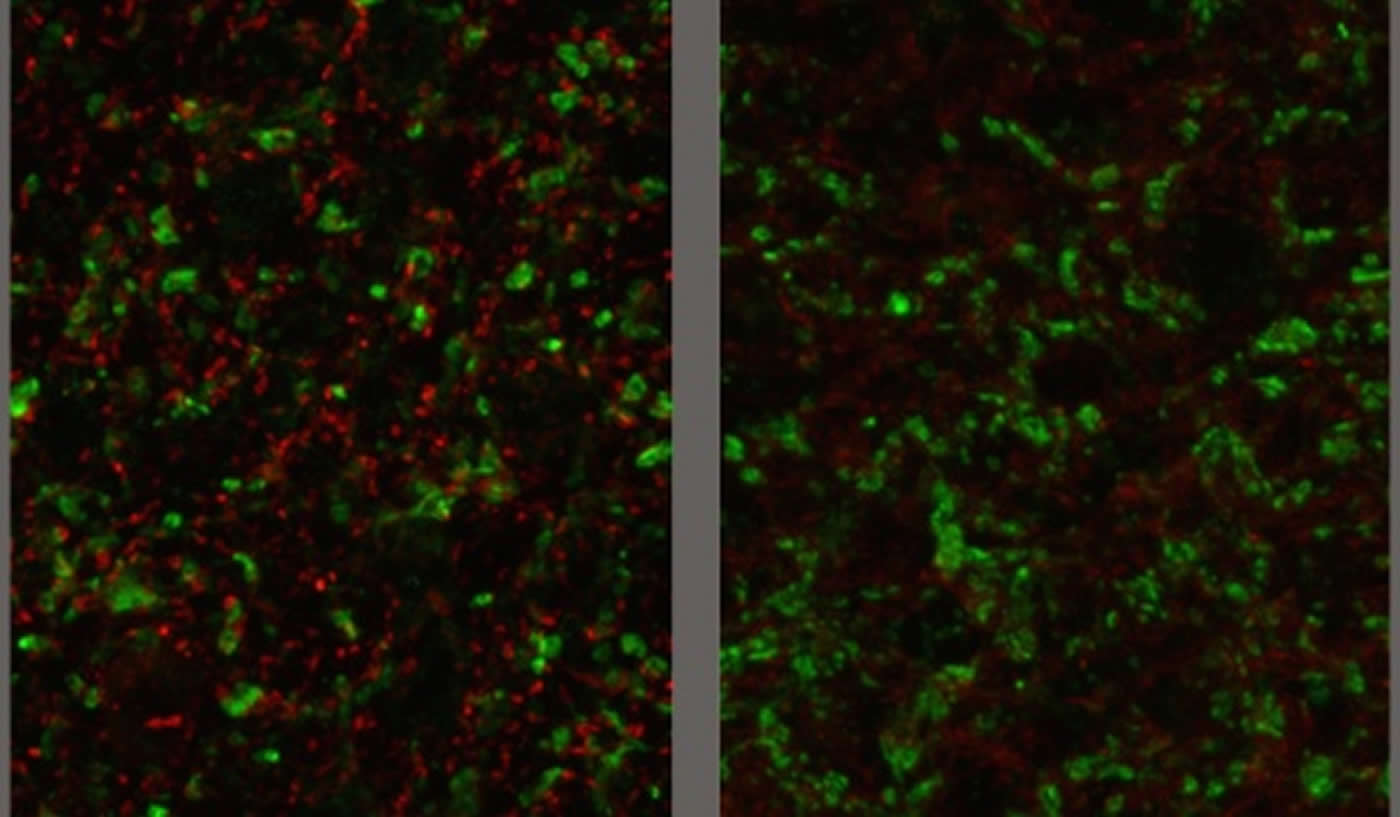 It’s creepy, it’s crawly, and it infects 20 percent of people in the United States. Fortunately, most people who carry the Toxoplasma gondii parasite don’t develop the symptoms of the disease it can cause. Only a small fraction of people, typically with compromised immune systems, develop toxoplasmosis.

Toxoplasmosis can lead to abnormal brain function, including seizures, by changing signaling in the diseased central nervous system.

In a study using a rodent model, scientists from the Virginia Tech Carilion Research Institute and the University at Buffalo found that the parasite-induced infection alters neural pathways specifically related to the neurotransmitter gamma-Aminobutyric acid, better known as GABA.

The researchers recently published their results in the American Society for Microbiology’s open-access journal, mBio.

“Toxoplasma can cause a nasty event in the brain of immunocompromised individuals,” said Michael Fox, an associate professor at the Virginia Tech Carilion Research Institute and co-corresponding author on the paper. “In this study we show for the first time that the parasite actually alters neural connections. But we still don’t understand why or even exactly how. Our study is only the first scratch on the surface of how it affects brain synapses.”

The parasite, mostly contracted from undercooked meat, seems to concentrate on the neurotransmitter GABA.

“The parasite can use GABA as a carbon source for metabolic activity and to facilitate its own dissemination through the brain,” said Fox, who is also an associate professor of biological sciences in Virginia Tech’s College of Science. “This, and other factors, led us to investigate whether GABA-containing synapses were altered in mice infected by Toxoplasma. We were shocked by the severity of the anatomical deficits observed.”

The physical abnormalities were so peculiar, Justin Brooks, who conducted the initial experiment while a graduate student, thought it had failed.

“He repeated the experiment many times before we believed the results,” Fox said.

The scientists found that a particular enzyme called GAD67 was actually misplaced in rodent brains with toxoplasmosis.

“The misplacement is significant because it results in defects in the synthesis of GABA, said Ira Blader, co-corresponding author on the paper. “Defects in GABA signaling and release from neurons will cause seizures.”

Blader is an associate professor of microbiology and immunology at the Jacobs School of Medicine and Biomedical Sciences at the University at Buffalo in New York.

“Our work is the first showing that an infection can alter this enzyme’s localization in the brain,” said Blader, who earned his undergraduate degree at Virginia Tech. “We don’t know how widespread it is, though. It might only occur during toxoplasmosis or in other infections or disorders. Our goal is to translate our basic research finding to improve patient outcomes.”

The patient outcomes can be widely varied, and they’re particularly devastating in immunocompromised people and fetuses.

In addition to undercooked meat, Toxoplasma can be contracted from feline feces, which is why pregnant women are advised to avoid the chore of scooping the dirty litter box. In a fully matured brain, the infection can wreak havoc. In a developing brain, the effects are even more disastrous.

GABA is an inhibitory neurotransmitter. Neurons will release the chemical as a signal to reduce the activity of other neurons in an effort to calm the central nervous system. Deficits in GABA signaling in the brain lead to seizures.

The research team found that the parasite concentrated itself around the inhibitory nerve terminals that normally release GABA.

“Toxoplasma can express and metabolize GABA, but we don’t know if that’s why it attacks these neural connections,” Fox said. “It’s unclear if the nerve terminals are degenerating, or if the parasite causes other cells to consume them. Perhaps the nerve terminals are still present, but the parasitic infection decouples the molecular machinery needed for their normal function.”

While many questions persist about the effects of toxoplasmosis, Fox and Blader are pleased with their results and eager to learn more.

“Our study was the first to find that Toxoplasma alters GABAergic circuitry during a progressed infection,” said Fox. “Now, we’re beginning to unravel the mystery of how the parasite affects the brain.”

Fox and Blader plan to continue their collaboration in an effort to understand the intricate mechanisms of toxoplasmosis.

“We hope the answers to our questions will provide us clues as to the mechanisms underlying Toxoplasma-induced changes in neural circuits,” Fox said. “But already, our research sheds novel light on some of the toxoplasmosis-induced neurological symptoms, such as seizures.”

During infections with the protozoan parasite Toxoplasma gondii, gamma-aminobutyric acid (GABA) is utilized as a carbon source for parasite metabolism and also to facilitate parasite dissemination by stimulating dendritic-cell motility. The best-recognized function for GABA, however, is its role in the nervous system as an inhibitory neurotransmitter that regulates the flow and timing of excitatory neurotransmission. When this pathway is altered, seizures develop. Human toxoplasmosis patients suffer from seizures, suggesting that Toxoplasma interferes with GABA signaling in the brain. Here, we show that while excitatory glutamatergic presynaptic proteins appeared normal, infection with type II ME49 Toxoplasma tissue cysts led to global changes in the distribution of glutamic acid decarboxylase 67 (GAD67), a key enzyme that catalyzes GABA synthesis in the brain. Alterations in GAD67 staining were not due to decreased expression but rather to a change from GAD67 clustering at presynaptic termini to a more diffuse localization throughout the neuropil. Consistent with a loss of GAD67 from the synaptic terminals, Toxoplasma-infected mice develop spontaneous seizures and are more susceptible to drugs that induce seizures by antagonizing GABA receptors. Interestingly, GABAergic protein mislocalization and the response to seizure-inducing drugs were observed in mice infected with type II ME49 but not type III CEP strain parasites, indicating a role for a polymorphic parasite factor(s) in regulating GABAergic synapses. Taken together, these data support a model in which seizures and other neurological complications seen in Toxoplasma-infected individuals are due, at least in part, to changes in GABAergic signaling.

IMPORTANCE Infections of the central nervous system can cause seizures. While inflammation in the brain has been proposed to initiate the onset of the seizures, relatively little is known about how inflammation impacts the structure and function of the neurons. Here we used a parasite called Toxoplasma gondii that infects the brain and showed that seizures arise due to a defect in signaling of GABA, which is the neurotransmitter primarily responsible for preventing the onset of seizures.