Infants Recognize Surprise In Others Before the Age of Two

Infants as young as 20 months of age expect adults to display surprise when discovering a false belief, according to a new study from UC Merced Professor Rose Scott.

Previous research suggested that children younger than 4 years old could not recognize when people held beliefs different from their own. Scott’s research shows that such understanding begins at a much earlier age, and it could have significant implications for our understanding of social disorders such as autism.

The findings, published this month in the journal Cognition, were the result of a novel experimental method that analyzes infants’ reactions to simple scenarios.

For example, the infant sees an adult shake two rattling toys. The adult leaves the room, and someone else comes in and “breaks” one of the toys so it no longer rattles. When the first person returns and shakes the toys, Scott and her team analyze the infant’s gaze, which holds longer when the child is surprised by what he or she sees. The researchers found that infants in the experiment would expect the person to show surprise when the second object doesn’t make any noise.

Traditional studies would require children to answer questions about what they saw or expected to see, leading researchers to believe that children younger than 4 could not recognize that people can have thoughts and beliefs that differ from their own.

“We’ve argued that traditional tasks place too many processing demands on children,” said Scott, a professor with the School of Social Sciences, Humanities and Arts. and the Health Science Research Institute Opens a New Window. . “By reducing these demands, children can show their understanding of the actions of a person with a false belief, even if they can’t articulate that understanding verbally.”

In another recent study, published in the Proceedings of the National Academy of Sciences, Scott and her colleagues found that 30- and 33-month-old toddlers were able to successfully demonstrate false-belief understanding using a modified version of the Sally-Anne test.

When asked where Sally expects to find the toy, 4-year-old children are able to correctly identify the basket. However, younger children respond verbally with the actual, and not the expected, location of the toy.

To make it easier for younger children, the researchers modified this test in two important ways. Instead of moving the toy to a box, Anne will move it to an unknown location out of the scene, simplifying the scenario. And the researchers prepared children for the test by giving them two practice questions.

The result was that 30-month-old toddlers were able to correctly identify where they expected Sally to look for the object.

“Our results have implications for theories of how the understanding of other minds develops,” Scott said. “Rather than undergoing a radical change at age 4, children may possess an understanding of belief early in life — in infancy — and they gradually become better at using this understanding in a variety of social situations.” 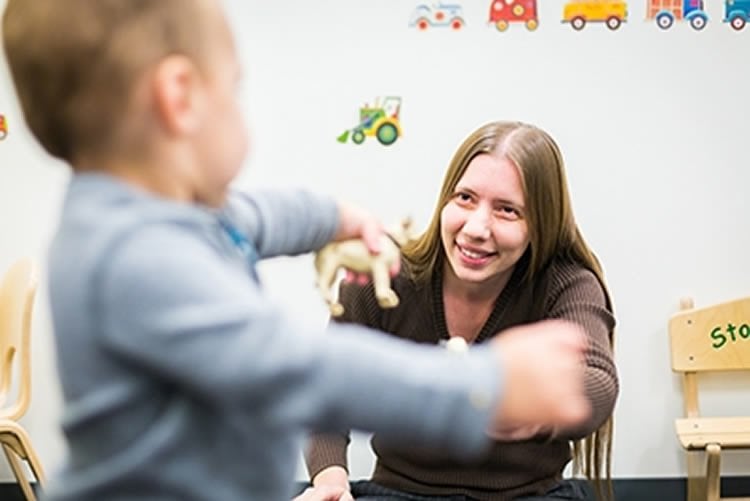 Scott said she’s currently exploring two follow-up questions to the recent findings. First, she is exploring in more depth why the traditional task is so hard for children and why the simpler task helped children pass the test at such an earlier age. She is also exploring how aspects of children’s environments — such as how frequently their parents use mental-state terms like “think,” “know” and “understand” — might impact the development of their false-belief understanding in the first few years of life.

The researchers believe that learning more about the development of infants’ understanding of others can help inform the development of early interventions for those who struggle with social interactions, such as those with autism spectrum disorders.

“Understanding that other individuals can hold and act on false beliefs about the world is an important ability that plays a central role in social interactions,” Scott said. “This research will help shed light on what children need to learn in order to be able to use their false-belief understanding in a variety of everyday situations.”

Recent studies suggest that by the second year of life, infants can attribute false beliefs to agents. However, prior studies have largely focused on infants’ ability to predict a mistaken agent’s physical actions on objects. The present research investigated whether 20-month-old infants could also reason about belief-based emotional displays. In Experiments 1 and 2, infants viewed an agent who shook two objects: one rattled and the other was silent. Infants expected the agent to express surprise at the silent object if she had a false belief that both objects rattled, but not if she was merely ignorant about the objects’ properties. Experiment 3 replicated and extended these findings: if an agent falsely believed that two containers held toy bears (when only one did so), infants expected the agent to express surprise at the empty, but not the full, container. Together, these results provide the first evidence that infants in the second year of life understand the causal relationship between beliefs and emotional displays. These findings thus provide new evidence for false-belief understanding in infancy and suggest that infants, like older children, possess a robust understanding of belief that applies to a broad range of belief-based responses.