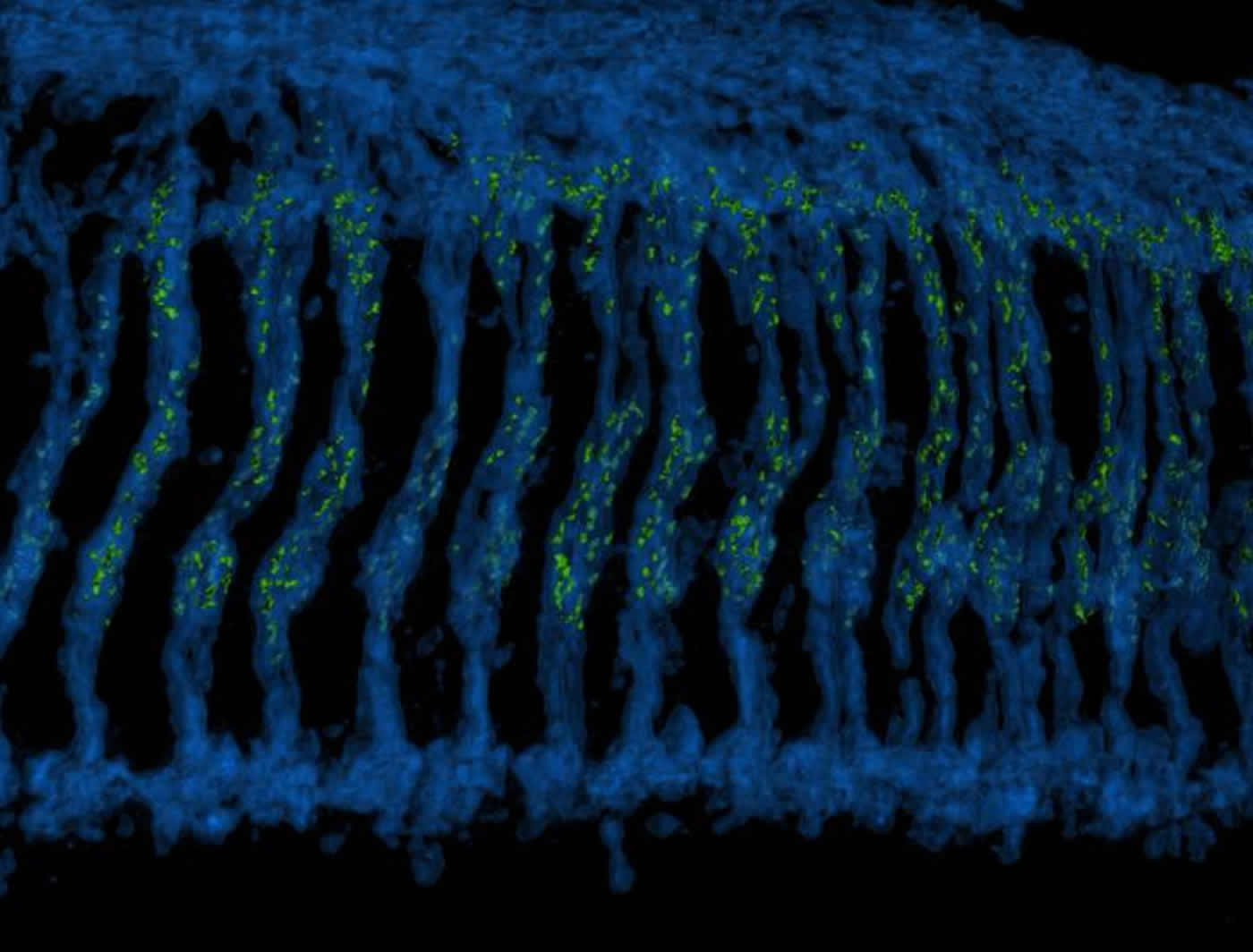 This is a 3-D reconstructed image of the Drosophila optic ganglion where photoreceptor axons (blue) extend downwards to make connections with brain neurons. The synaptic connections formed by photoreceptors are highlighted with the active zone protein Bruchpilot and colored in green. Image credit: Dr. Atsushi Sugie / DZNE.

An international team of researchers at German Center for Neurodegenerative Diseases (DZNE) and Tokyo Institute of Technology (Tokyo Tech) have revealed in a collaborative study – published today in Neuron, that neurons in the eye change on the molecular level when they are exposed to prolonged light. The researchers could identify that a feedback signalling mechanism is responsible for these changes. The innate neuronal property might be utilized to protect neurons from degeneration or cell death in the future.

Changes in the functional connections between neurons – ‘synapses’ – contribute to our ability to adapt to environmental changes. However until now, little was known about the signalling underlying such ‘synaptic plasticity’. Now, investigations of fruit flies by researchers at the German Center for Neurodegenerative Diseases (DZNE), Tokyo Tech, the National Institute of Genetics in Japan, and the European Neuroscience Institute in Germany reveal details of the mechanisms behind synaptic plasticity.

“The synaptic changes that we have identified might reflect an innate neuronal property that leads to protection from excessive stimuli,” explains Dr. Atsushi Sugie, the study’s lead author and Postdoc at DZNE. “By enhancing this property, we might be able to protect neurons from degeneration or cell death.”

Recent studies have suggested that changes in a region at the presynaptic membrane, described as the active zone, control synapse function. The research teams based in Germany and Japan exposed living fruit flies – the commonly studied Drosophila – to different light regimes and then compared the active zones in the photoreceptors.

T-shaped structures at the presynaptic membrane tether synaptic vesicles and control the release of neurotransmitters to the postsynaptic neuron. By tagging proteins that are crucial to these T-shaped structures the researchers revealed a drop in a subset of active zone proteins, while others remained unchanged. Further, they found that corresponding to the loss of structural proteins, the number of T-shaped structures was also reduced.

The researchers were also able to identify that a feedback mechanism was responsible for these changes and that it relied on the signalling protein Wnt. The results contribute to a better understanding of the molecular mechanisms underlying brain functions such as learning and memory. Future work may investigate how modifying the Wnt signal can be used to manipulate synaptic plasticity, with possible therapeutic applications for neurodegenerative or mental diseases.

Repetitive or prolonged stimuli can lead to short- or long-term changes at synapses, affecting how they transmit signals and supporting plastic changes in the function of the nervous system, including learning and memory or the ability to adapt to environmental changes.

The role of proteins

Previous studies have identified that the probability of neurotransmitter release is strongly correlated with the levels of certain proteins at the active zone region of the pre-synaptic membrane. In addition, the localization of these proteins depends on neural activity. The present study reveals that the molecular composition of synapses can be modulated in living organisms exposed to sustained environmental stimuli.

Sugie and her colleagues maintained Drosophila fruit flies that had just entered the adult stage of their life cycle in one of three light regimes: constant light; constant dark; and 12 hours light with 12 hours dark. The light used was mild to avoid retinal degeneration. Observations of fluorescently-tagged active zone protein Bruchpilot showed that while this protein was initially localised at discrete points representing active zones, prolonged exposure to light caused delocalization, which was reversed when the flies were returned to darkness.

A number of proteins have been associated with the structure of the active zone and the T-shaped structures that tether the synaptic vesicles. Although a subset of proteins was not affected, the researchers observed changes comparable to the loss of Bruchpilot in other proteins with similar functions, as well as re-organization of the microtubules.

According to the researchers the study suggests an accessible paradigm for assessing synaptic plasticity in neuronal synapses, as opposed to neuro-muscular synapses. They also emphasise how in their work they monitor synaptic plasticity with an optical microscope by tagging proteins with fluorescent molecules without the need for an electron microscope.

Summary
Neural activity contributes to the regulation of the properties of synapses in sensory systems, allowing for adjustment to a changing environment. Little is known about how synaptic molecular components are regulated to achieve activity-dependent plasticity at central synapses. Here, we found that after prolonged exposure to natural ambient light the presynaptic active zone in Drosophila photoreceptors undergoes reversible remodeling, including loss of Bruchpilot, DLiprin-α, and DRBP, but not of DSyd-1 or Cacophony. The level of depolarization of the postsynaptic neurons is critical for the light-induced changes in active zone composition in the photoreceptors, indicating the existence of a feedback signal. In search of this signal, we have identified a crucial role of microtubule meshwork organization downstream of the divergent canonical Wnt pathway, potentially via Kinesin-3 Imac. These data reveal that active zone composition can be regulated in vivo and identify the underlying molecular machinery.