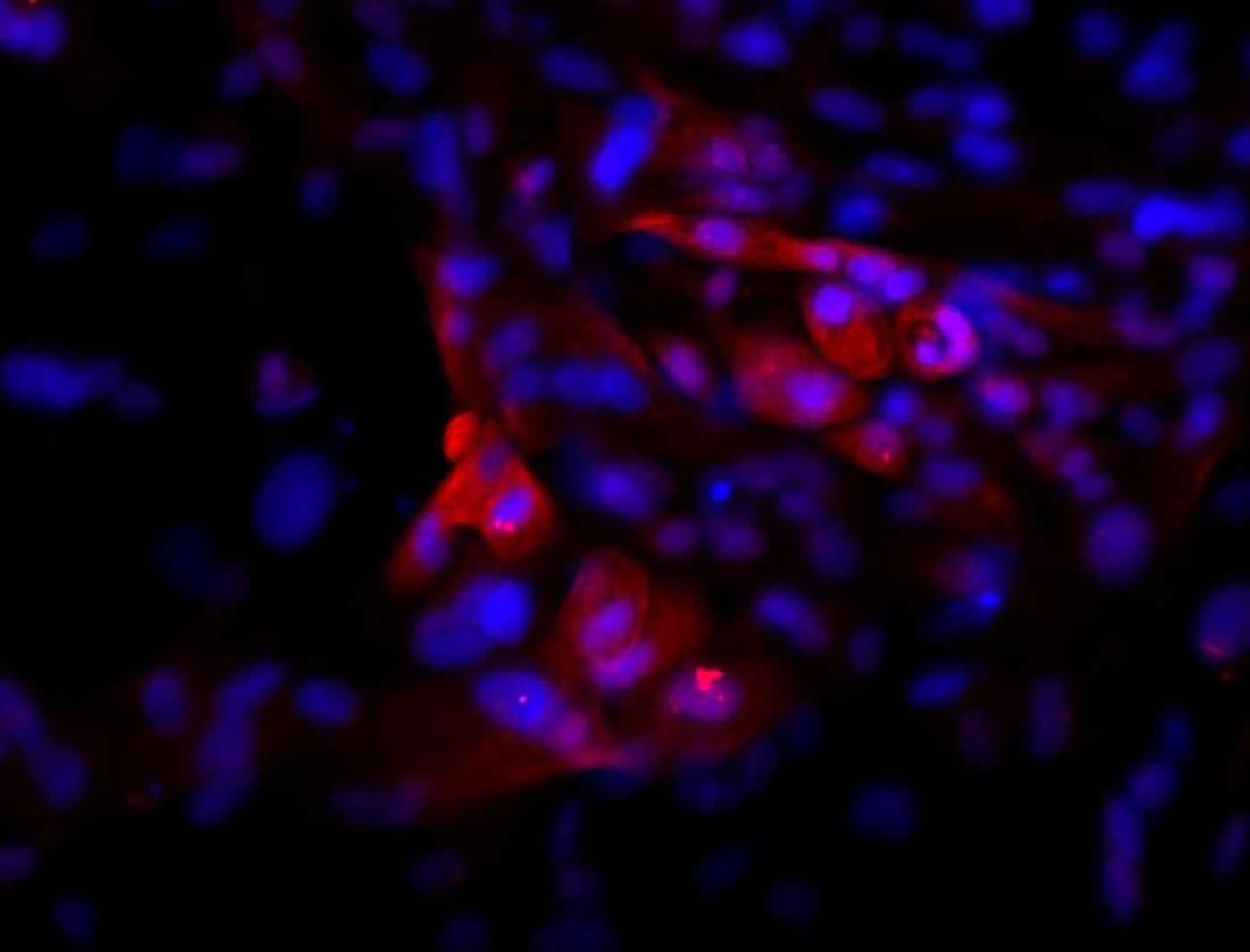 Immunofluorescence image of hPSC-derived pituitary cells after 30 days of differentiation. The cells were stained for ACTH (red) and DNA/nucleus (blue). Cells similar to the ones shown in the picture were used for the transplantation studies. NeuroscienceNews.com image is credited to Bastian Zimmer, Sloan Kettering Institute.

Researchers have successfully used human stem cells to generate functional pituitary tissue that secretes hormones important for the body’s stress response as well as for its growth and reproductive functions. When transplanted into rats with hypopituitarism, a disease linked to dwarfism and premature aging in humans, the lab-grown pituitary cells promoted normal hormone release. The study, which lays the foundation for future preclinical work, appears June 14 in Stem Cell Reports.

“The current treatment options for patients suffering from hypopituitarism, a dysfunction of the pituitary gland, are far from optimal,” says first study author Bastian Zimmer of the Sloan Kettering Institute for Cancer Research. “Cell replacement could offer a more permanent therapeutic option with pluripotent stem cell-derived hormone-producing cells that functionally integrate and respond to positive and negative feedback from the body. Achieving such a long-term goal may lead to a potential cure, not only a treatment, for those patients.”

The pituitary gland is the master regulator of hormone production in the body, releasing hormones that play a key role in bone and tissue growth, metabolism, reproductive functions, and the stress response. Hypopituitarism can be caused by tumors, genetic defects, brain trauma, immune and infectious diseases, or radiation therapy. The consequences of pituitary dysfunction are wide ranging and particularly serious in children, who can suffer severe learning disabilities, growth and skeletal problems, as well as effects on puberty and sexual function.

Currently, patients with hypopituitarism must take expensive, lifelong hormone replacement therapies that poorly mimic the body’s complex patterns of hormone secretion that fluctuates with circadian rhythms and responds to feedback from other organs. By contrast, cell replacement therapies hold promise for permanently restoring natural patterns of hormone secretion while avoiding the need for costly, lifelong treatments.

Recently, scientists developed a procedure for generating pituitary cells from human pluripotent stem cells–an unlimited cell source for regenerative medicine–using organoid cultures that mimic the 3D organization of the developing pituitary gland. However, this approach is inefficient and complicated, relies on ill-defined cellular signals, lacks reproducibility, and is not scalable or suitable for clinical-grade cell manufacturing.

To address these limitations, Zimmer and senior study author Lorenz Studer of the Sloan Kettering Institute for Cancer Research developed a simple, efficient, and robust stem cell-based strategy for reliably producing a large number of diverse, functional pituitary cell types suitable for therapeutic use. Instead of mimicking the complex 3D organization of the developing pituitary gland, this approach relies on the precisely timed exposure of human pluripotent stem cells to a few specific cellular signals that are known to play an important role during embryonic development.

To test the therapeutic potential of this approach, the researchers transplanted the stem cell-derived pituitary cells under the skin of rats whose pituitary gland had been surgical removed. The cell grafts not only secreted adrenocorticotropic hormone, prolactin, and follicle-stimulating hormone, but they also triggered appropriate hormonal responses in the kidneys.

The researchers were also able to control the relative composition of different hormonal cell types simply by exposing human pluripotent stem cells to different ratios of two proteins: fibroblast growth factor 8 and bone morphogenetic protein 2. This finding suggests their approach could be tailored to generate specific cell types for patients with different types of hypopituitarism. “For the broad application of stem cell-derived pituitary cells in the future, cell replacement therapy may need to be customized to the specific needs of a given patient population,” Zimmer says.

In future studies, the researchers plan to further improve the protocol to generate pure populations of various hormone-releasing cell types, enabling the production of grafts that are tailored to the needs of individual patients. They will also test this approach on more clinically relevant animal models that have pituitary damage caused by radiation therapy and receive grafts in or near the pituitary gland rather than under the skin. This research could have important implications for cancer survivors, given that hypopituitarism is one of the main causes of poor quality of life after brain radiation therapy.

“Our findings represent a first step in treating hypopituitarism, but that does not mean the disease will be cured permanently within the near future,” Zimmer says. “However, our work illustrates the promise of human pluripotent stem cells as it presents a direct path toward realizing the promise of regenerative medicine for certain hormonal disorders.”

About this stem cell research article

Funding: The researchers were supported by the New York State Stem Cell Science and the Starr Foundation. The work was further supported in part by the National Institutes of Health and the National Cancer Institute.