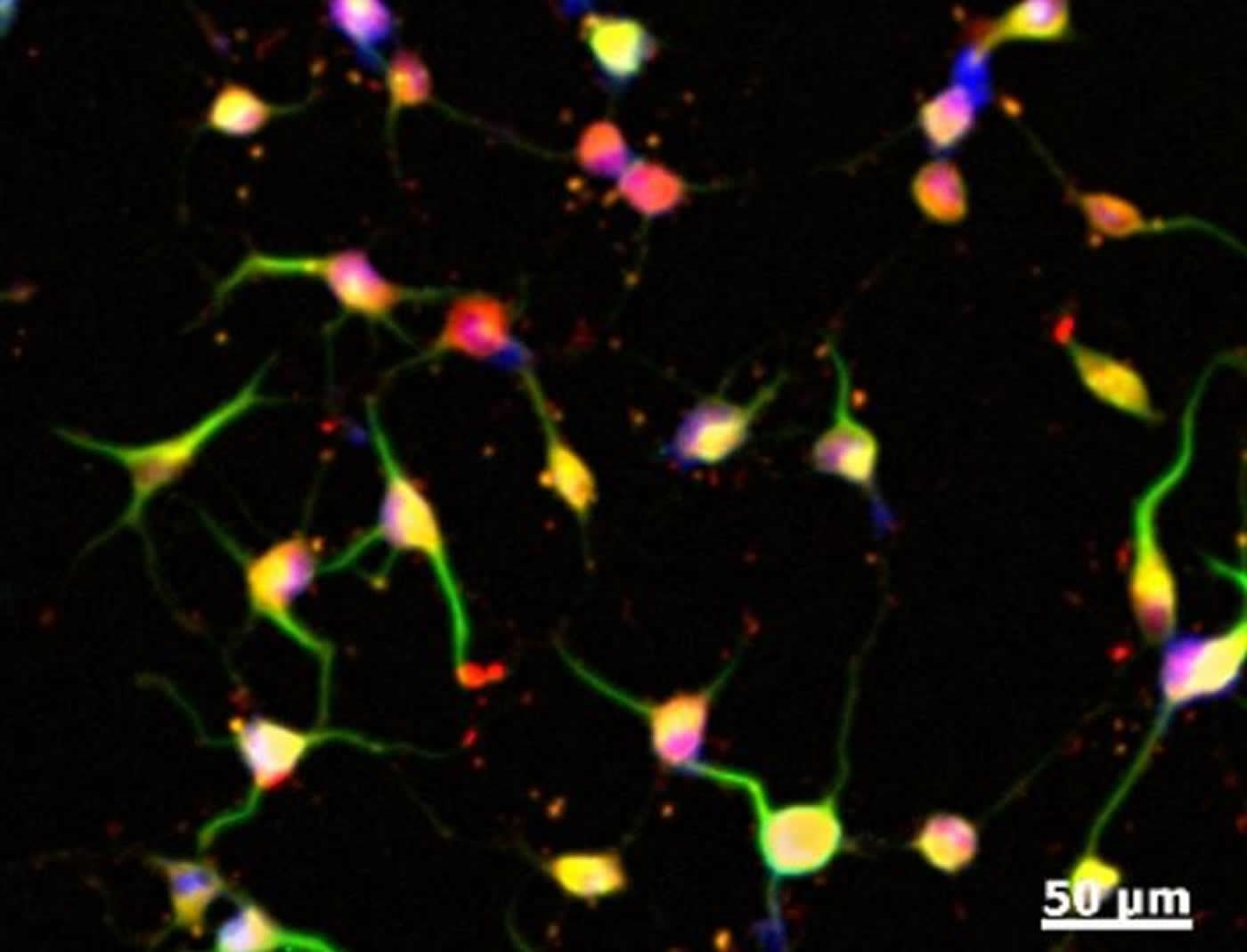 The image shows Keratinocyte-derive neural crest stem cells that have been turned into neurons. NeuroscienceNews.com image is credited to University at Buffalo.

From Skin to Brain: Stem Cells Without Genetic Modification

UB study yields neural crest cells from adult skin cells, and could lead to new treatments for Parkinson’s and other brain illnesses.

A discovery, several years in the making, by a University at Buffalo research team has proven that adult skin cells can be converted into neural crest cells (a type of stem cell) without any genetic modification, and that these stem cells can yield other cells that are present in the spinal cord and the brain.

The practical implications could be very significant, from studying genetic diseases in a dish to generating possible regenerative cures from the patient’s own cells.

“It’s actually quite remarkable that it happens,” says Stelios T. Andreadis, PhD, professor and chair of UB’s Department of Chemical and Biological Engineering, who recently published a paper on the results in the journal Stem Cells.

The identity of the cells was further confirmed by lineage tracing experiments, where the reprogrammed cells were implanted in chicken embryos and acted just as neural crest cells do.

“In medical applications this has tremendous potential because you can always get a skin biopsy,” Andreadis says. “We can grow the cells to large numbers and reprogram them, without genetic modification. So, autologous cells derived from the patient can be used to treat devastating neurogenic diseases that are currently hampered by the lack of easily accessible cell sources.”

The process can also be used to model disease. Skin cells from a person with a genetic disease of the nervous system can be reprogrammed into neural crest cells. These cells will have the disease-causing mutation in their chromosomes, but the genes that cause the mutation are not expressed in the skin. The genes are likely to be expressed when cells differentiate into neural crest lineages, such as neurons or Schwann cells, thereby enabling researchers to study the disease in a dish. This is similar to induced pluripotent stem cells, but without genetic modification or reprograming to the pluripotent state.

The discovery was a gradual process, Andreadis says, as successive experiments kept leading to something new. “It was one step at a time. It was a very challenging task that took almost five years and involved a wide range of expertise and collaborators to bring it to fruition,” Andreadis says. Collaborators include Gabriella Popescu, PhD, professor in the Department of Biochemistry in the Jacobs School of Medicine and Biomedical Sciences at UB; Song Liu, PhD, vice chair of biostatistics and bioinformatics at Roswell Park Cancer Institute and a research associate professor in biostatistics UB’s School of Public Health and Health Professions; and Marianne Bronner, PhD, professor of biology and biological engineering, California Institute of Technology.

Andreadis credits the persistence of his then-PhD student, Vivek K. Bajpai, for sticking with it.

“He is an excellent and persistent student,” Andreadis says. “Most students would have given up.” Andreadis also credits a seed grant from UB’s office of the Vice President for Research and Economic Development’s IMPACT program that enabled part of the work.

The work recently received a $1.7 million National Institutes of Health grant to delve into the mechanisms that occur as the cells reprogram, and to employ the cells for treating the Parkinson’s-like symptoms in a mouse model of hypomyelinating disease.

“This work has the potential to provide a novel source of abundant, easily accessible and autologous cells for treatment of devastating neurodegenerative diseases. We are excited about this discovery and its potential impact and are grateful to NIH for the opportunity to pursue it further,” Andreadis said.

How Breathing Shapes Our Brain

Funding: The research, described in the journal Stem Cells under the title “Reprogramming Postnatal Human Epidermal Keratinocytes Toward Functional Neural Crest Fates,” was supported by grants from the National Institutes of Health.

During development, neural crest (NC) cells are induced by signaling events at the neural plate border of all vertebrate embryos. Initially arising within the central nervous system, NC cells subsequently undergo an epithelial to mesenchymal transition to migrate into the periphery, where they differentiate into diverse cell types. Here we provide evidence that postnatal human epidermal keratinocytes (KC), in response to fibroblast growth factor 2 and insulin like growth factor 1 signals, can be reprogrammed toward a NC fate. Genome-wide transcriptome analyses show that keratinocyte-derived NC cells are similar to those derived from human embryonic stem cells. Moreover, they give rise in vitro and in vivo to NC derivatives such as peripheral neurons, melanocytes, Schwann cells and mesenchymal cells (osteocytes, chondrocytes, adipocytes, and smooth muscle cells). By demonstrating that human keratin-14+ KC can form NC cells, even from clones of single cells, our results have important implications in stem cell biology and regenerative medicine.