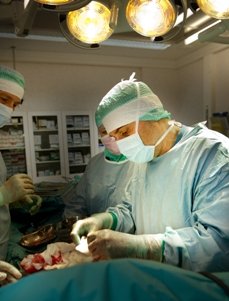 Lead researcher, Paolo Macciarini will be presenting his research and findings during the AAAS Annual Meeting in Boston. Credited to Karolinska Institutet.
Home
Featured

Pioneering stem cell-based transplant technology is being developed and tested on new organs and tissues.

Surgeon Paolo Macchiarini has made his name by successfully transplanting bioengineered stem cell-based trachea, composed of both artificial and biological material. He now plans to use the technique to recreate more complex tissues, such as the oesophagus and diaphragm or organs such as the heart and lungs. He has also made an experimental attempt to regenerate brain in mice and rats. This is part of the news he will be presenting during his seminar at the scientific AAAS Annual Meeting in Boston.

In June 2011, media all over the world reported about a ground breaking transplant, where a patient received an artificial trachea covered in his own stem cells. The result was an artificial windpipe with biological functions. To date, five operations have been carried out using this technique.

“We learn something from each operation. This means we can develop and refine the technique. We are also evaluating how we can transfer our experiences to other fields, such as neurology. The aim is to make as much use of the body’s own healing potential as we can”, says Paolo Macchiarini, Professor of Regenerative Surgery at Karolinska Institutet, and responsible for the surgery.

At the AAAS Annual Meeting, he will talk about how he believes the technology can be used in the future. This will include:

The symposium, “Stem Cell-Based Bioartificial Tissues and Organs” will take place in Hynes Convention Center, Boston, room 207 on Monday 18 February 09:45 am – 11:15 am.